Why does ice melt without getting hotter? 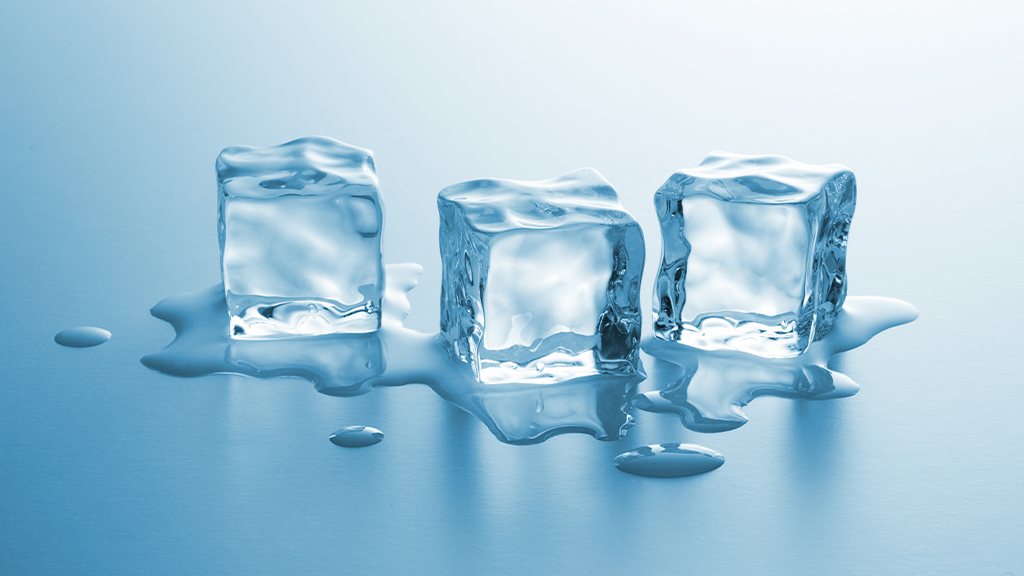 Today's task asks the question, "Why does ice melt without getting hot?" This more fitting question might be, "Why does the temperature stay the same when water is melting and boiling?" (But it wouldn't fit in the space allotted.) This is the phenomenon students actively try to make sense of by engaging in multiple elements of developing and using models and using the thinking tools of patterns and the flow of energy and matter. The goal is for students to begin to develop a deep conceptual understanding of the polar property of water molecules and how this property affects phase changes.

Tell students you have a puzzling phenomenon to show them! Ask students to create a space in their science notebooks to record noticings and questions that come up as they observe the phenomenon.

Show students data (graph) collected from heating ice water until it boils. You can share the graph above which is a snapshot from a video students watch later in the task or *collect and graph your own data to share. You might refer students to the set-up and note two things: (1) the hotplate heat setting was set to "4", and (2) the water was continuously stirred while the water was being heated.

*Analyzing data supports students' sensemaking. It is not necessary students conduct the investigation and collect the data themselves.

Ask students, "What patterns do you observe in the data presented in the graph?" Give students a few minutes to observe the graph and record their ideas before sharing them with a partner. As you move around the room and listen to students sharing ideas, you might ask:

Also remind students to write down questions that arise while observing and identifying patterns in the data.

Bring the class back together and ask them to share the patterns they observed. Students will likely say:

Say to students, "I've marked three locations on the graph, A, B and C. Can you create a model to explain the patterns in the temperature data you've observed?" Ask students to work in the alone zone (independent thinking time) to create their initial models. As you move around the room, you might ask questions to support students in creating their models:

Tell students to set their models aside (without sharing); we will come back to them. 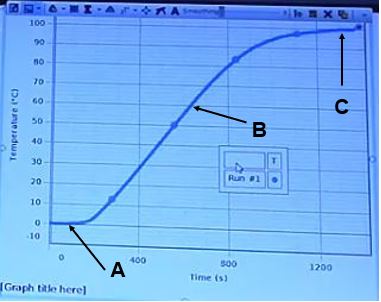 Tell students you have a video that shows the ice water being heated to boiling. Ask students to open their science notebooks and again record their observations and any questions that come to mind. Play the heating curve video (above).

Ask students to return to their models. Based on their observations, is there anything they would add to or change? Give students independent thinking time to revise their models. Next, ask students to share their models with a partner or small group. You might use the following partner conversational supports to help facilitate their discussion:

Make sure students have opportunities to switch roles.

Assign partners to small groups of four. Ask each group to create a group consensus model to explain the patterns in temperature data they've observed. As you move around the room, you might asks groups some of the same questions you asked to support students in creating initial models.

Create a classroom or virtual space for groups to share their consensus models. Ask students to visit at least three group models and at each model

Give student groups an opportunity to revise their models based on peer-feedback and their observations of other group models. You might at this point choose to create a class consensus model. Begin by asking groups to share similarities between the models; ask students how you should represent the components and interactions on on the class model. Suggest noting places on the model the class is unsure of with question marks.

You might say to students, "Many of us are wondering if we can change the shape of the line by increasing the hot plate's temperature. Should we investigate this questions first?"

NSTA has created a Why does ice melt without getting hotter? collection of resources to support teachers and families using this task. If you're an NSTA member, you can add this collection to your library by clicking Add to my library (near top of page).