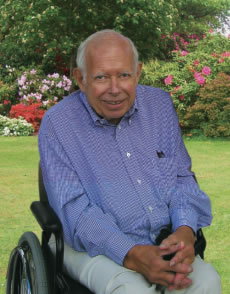 Long-time NSTA exhibitor Thomas “Tom” Nelson Hubbard died Monday, March 21, 2011, in Santa Barbara, California from cardio-respiratory failure.  Born February 22, 1931, in Rockford, Illinois, Tom attended Rockford schools, Hotchkiss School (Class of ’49) and Yale University (Class of ’53).  He is survived by Loretta “Lorry” Hubbard, his wife since 1981.
Tom founded Hubbard Scientific Co. in 1961 and sold it in 1973 and then founded Crystal Productions Co., an art education resource publisher in Northbrook, Illinois. He then moved to Aspen, Colorado in 1975 where he served as Chairman until his death.  The business continues today in its office located in Glenview, Illinois.
Although he became a paraplegic in 1975 following a hang glider accident in Aspen, Tom’s enthusiasm for life, adventure, travel, fly fishing, and the invention and production of educational resource materials, both for science and art, was unhampered.  His sense of humor, his intellect, and his charming smile were enjoyed by all who knew him. Tom was also a talented watercolor landscape artist and showed in various galleries around the country as well as in Aspen, Colorado, where he lived for over 30 years.
Memorials may be sent to the Anderson Ranch Arts Center Foundation in Aspen, Colorado; the Santa Barbara Museum of Art in Santa Barbara, California; or the Santa Barbara Cottage Hospital Foundation in Santa Barbara, California.