From Curiosity to Conservation Careers

Conservation Connect Links Wildlife, Technology, and Careers With In- and Out-of-School Learning 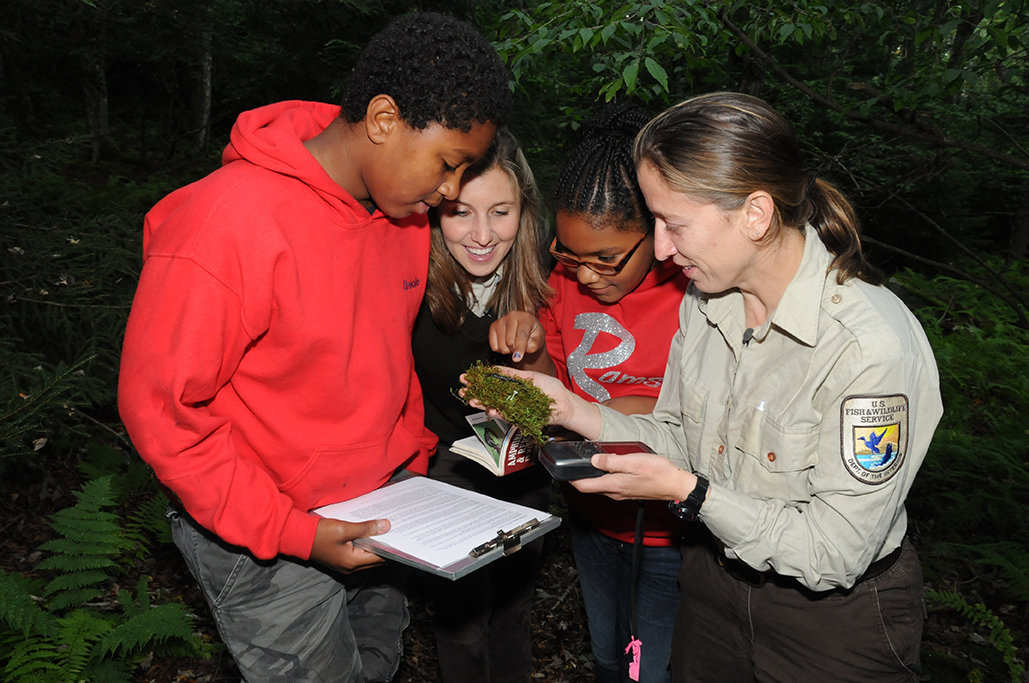 Students find meaning and relevance in their learning when they connect lessons to real-world issues and possible career paths. The U.S. Fish and Wildlife Service’s (FWS) Conservation Connect, a freely available video series, connects learners to wildlife, technology, and careers. Videos and supplementary resources are designed to serve middle school youth, but elementary and high school educators—and even FWS retirees—report that they also use the tools. Each episode features a species, a conservation career, and technology that professionals use to study or protect that species and its habitat. Videos run from five to eight minutes and portray conservation professionals studying wildlife using technology—such as radio transmitters, webcams, and electrofishing boats—and safety gear, such as life vests, protective gear for feeding young black-footed ferrets, and helmets and rock climbing equipment for repelling off cliffs to count California condor eggs. Episodes focus on animals from mammals and insects, to reptiles and amphibians, to waterfowl and birds of prey. Students learn about careers in such fields as fish and wildlife biology, law enforcement, and environmental education.

To engage learners directly, FWS also launched monthly Conservation Connect LIVE! broadcasts. Classrooms can tune in on their computers from across the world and interact with conservation professionals live, using a chat box to ask questions about wildlife, technology, and careers, all answered during the broadcast. Live broadcasts allow learners to meet professionals and learn more deeply about conservation.. Audiences include classes, homeschool students, museums, and zoos. FWS also archives the broadcasts to accommodate learners’ schedules.

To further provide resources for educators, FWS is working with National Science Teachers Association (NSTA) volunteers to add tools. Education consultant Juliana Texley is developing lessons using the data that professionals featured in the program use to manage resources. Go Further lessons use these data as the foundation for study and inquiry. Lessons involve a variety of math topics, such as analyzing changes in the population density of small mammals in southwest grasslands, graphing the arrival of migratory waterfowl in wetlands in the Atlantic flyway, and examining the food webs of bald eagles and freshwater mussels. Teacher Pages document how the lessons relate to the Next Generation Science Standards, Environmental Education Standards of Excellence, and Common Core State Standards. In addition, the NSTA Recommends review team paired nationally recognized trade publications, such as America’s Animal Comebacks: California Condors: Saved by Captive Breeding and Mrs. Carter’s Butterfly Garden, to episodes, which educators can use to further expand learning.

Educators can use Conservation Connect resources to inspire additional student exploration. The videos lend themselves to further inquiry about habitat loss and destruction, endangered species, pesticide use, water quality, ecosystems, and stewardship—all while students learn about their public lands. “The programs help my students make the connection between what they are studying in class and various ecosystems around the United States. This is another tool that I can use to help bring relevance to the lessons I’m teaching,” says Matt McGregor, a high school biology and marine science teacher.

Conservation Connect is a program of the FWS’s National Conservation Training Center’s Division of Education and Outreach, with the Division of Knowledge Resources and Technologies. To learn about links between environmental education and academic standards, visit the North American Association for Environmental Education’s website. FWS continues to film episodes, so check back often for new content.