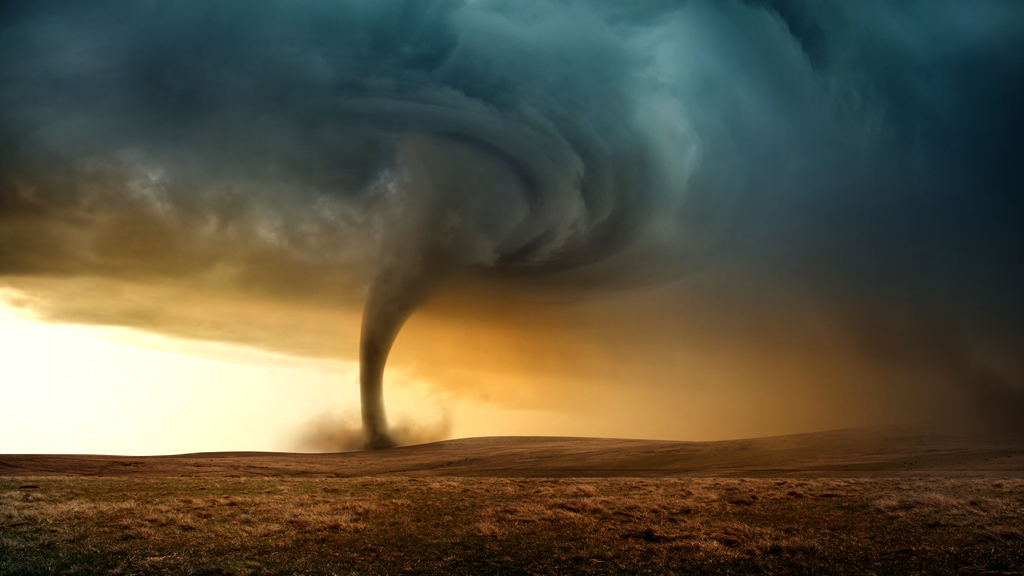 I will never forget one day in spring 1974 when my father returned home from a trip to Xenia, Ohio. Dad was in the insurance business, and I was used to hearing cautionary tales about people who injured themselves while setting off home fireworks, riding motorcycles without helmets, or cleaning out their gutters while standing on rickety ladders. But this was different. Dad heard about a lot of destruction in his line of work, but what he saw in Xenia left him practically speechless. The entire downtown was destroyed, and 33 people had been killed. It was by far the worst disaster he’d ever personally witnessed, or ever would again.

The tornado that struck Xenia on April 3, 1974, was part of what came to be called the 1974 Super Outbreak. At least 148 tornadoes were confirmed across 13 U.S. states and one Canadian province. Thirty of those tornadoes were level EF4 (winds of 267 to 322 kilometers per hour [kph]) or EF5 (winds of more than 322 kph). The total death toll was 319. For 37 years, the 1974 Super Outbreak held the record of most tornadoes in a single 24-hour period, until the 2011 Super Outbreak, which involved an astonishing 360 confirmed tornadoes, 15 of which were EF4 or EF5 in strength. Since 2011, two more super outbreaks have occurred, one each in 2020 and 2021, each containing more than 100 tornadoes within a 24-hour period.

Hmmm. Three super outbreaks in 11 years, after a 37-year gap? Does that mean climate change is making tornadoes worse? That sounds like a question for science!

And it is! But it turns out that it is not a straightforward question to answer. And one reason is that you might choose from a lot of different parameters to assess whether one tornado, or one tornado season, is worse than another. Do you measure the number of tornadoes, in which case the Super Outbreaks are the worst events? Or do you measure the number of deaths? Or the amount of economic damage? Or wind speed, atmospheric pressure, or length of time on the ground? Depending on which of these measures you choose, you might get different answers to your question of whether tornado activity is growing worse over time in a way that points to climate change as a contributing factor.

You could do a similar exercise with hurricanes, tornadoes’ larger equatorial cousins. Is climate change making hurricanes worse? Well, that depends on whether you define worse in terms of the number of hurricanes, their size or their intensity, their destructiveness of lives or property, the amount of rainfall they bring, the distance they travel over land, the amount of time they spend over any given place—well, you get the picture. As if those weren’t enough possible choices, sometimes new parameters present themselves. For example, several recent hurricanes have intensified with unexpected quickness; can that characteristic be linked to climate change?

The interaction of climate change with extreme weather is complicated and probabilistic (by which I mean that the best you can do is give a probability range for the impact of climate change, not a “yes” or “no”), and that makes the topic particularly amenable to bad faith arguments and misconceptions. Those who aim to downplay climate change, or discourage policies that would reduce fossil fuel use, will often emphasize that many uncertainties remain about how climate change affects different kinds of extreme events. And, yes, there are uncertainties. But that doesn’t mean we don’t know anything at all. This Heritage Foundation interview with one of its own economists is an excellent example of traveling in a more or less straight line from uncertainties about the impacts of climate change on hurricanes to the conclusion that reducing carbon emissions would do more harm than good. (Teachers, if you discuss this interview with your students, be prepared to help them examine the rhetorical devices the economist uses to reach his conclusions. The National Center for Science Education (NCSE) uses the FLICC [Fake Experts, Logical Fallacies, Impossible Expectations, Conspiracy Theories, Cherry Picking] model developed by John Cook to inoculate students against potentially deceptive argumentation.)

But even those who lack a professional interest in downplaying the role of climate change in worsening extreme weather events can have misconceptions. One survivor of Hurricane Florence, the second major hurricane to inundate North Carolina with 500-year floods within two years of one another, explained, “We live on the coast. It’s cyclical. We may get two or three in a year, then go four or five years with nothing.” Another said, “Really the Earth goes through cycles. So it’s just we’re on that particular cycle where we’re grabbing more storms.” That’s not how 500-year floods are supposed to work: If you get significantly more than one every 500 years, something has changed.

So if the relationship between extreme weather and climate change is so complicated—and as a result, so confusing—why should we nevertheless be willing to tackle the question in the science classroom? I can think of two reasons.

First, extreme weather really gets students’ attention, especially when it affects them, their families, and their communities, and the first question they might ask is whether climate change is responsible. (Of course, you should be pleased if they ask it!) And they certainly deserve the best answer we can supply.

Second, the more we know about how climate change may affect extreme weather, the better prepared we can be. If we can predict whether, for example, hurricanes are likely to move more quickly or slowly, carry more or less rain, have faster or slower wind speeds, or begin earlier and continue later in the year, we will be able to make wiser land-use, building code, and emergency planning decisions. And the same goes for wildfires, tornadoes, droughts, and other catastrophes. These are the kinds of decisions that today’s students will have to make regularly in tomorrow’s warmer world.

Fortunately, if there’s one thing scientists love, it’s a challenge, so developing a way to untangle the connections between extreme weather events and climate change is right up scientists’ alley. A relatively new area of climate science research called extreme event attribution seeks to develop transparent and reproducible methods to determine the role of climate change in extreme events. In a very simple nutshell, what scientists do is compare different models of the climate over time—some that include the increases in greenhouse gases since the 1850s and some that do not. Because of natural variation in climate, all of these models would be expected to predict, for example, heavier rainfall or heat waves or exceptionally big hurricanes in some, but not all, years. If the models that exclude increased greenhouse gas emissions show less frequent or less intense extreme weather events, scientists can conclude that these emissions had a role in increasing their probability.

Because of the demands of scientific rigor, attribution analyses of a given extreme weather event often are not published for many months afterward. But they eventually are published, and the evidence is now clear that climate change is contributing to increased hurricane intensity; more large wildfires; more frequent, severe, and pervasive droughts; and more frequent and intense heat waves.

While these general trends are clear, people tend to want to know whether any particular extreme event was caused by climate change. And waiting for peer-reviewed research to be published risks (horrors!) missing the news cycle. Wouldn’t it be better if scientists could provide reliable feedback about the role of climate change in an extreme weather event while people are still talking about it? Responding to the perceived need for more rapid feedback, an international collaboration of attribution experts formed the World Weather Attribution initiative (WWAI). The WWAI website is well worth bookmarking: Not only does it provide timely and thorough information, but it is also a model of scientific transparency. As any good math teacher often requests, it shows its work.

What do I mean by that? Well, what kinds of questions might you ask about how such a project does its work? Here are a few that spring to mind: How do they decide which events to evaluate? How exactly do they determine whether climate change contributed to a particular event, and if so, by how much? Do they consider the role of other causes? If they use models to make these attributions (and of course, they do), which ones do they choose and why? WWAI answers all of these questions and more, briefly on its overview page and exhaustively in a series of peer-reviewed publications.

You won’t find every extreme weather event on the WWAI website. Although the science of extreme event attribution is advancing rapidly, the process of evaluating an event is still labor-intensive, and there simply aren’t enough data to reach any definitive conclusions about the role of climate change in every individual event. But looking at the events that have been evaluated is instructive—and sobering. Climate change was determined to have made early season heat waves in India and Pakistan 30 times more likely, and to have added four billion dollars to the damage caused by a typhoon in Japan. In other cases, the role of climate change was harder to discern. In a drought in East Africa, for example, climate change probably contributed to higher temperatures, but couldn’t be linked to changes in rainfall patterns. And in still other cases, like severe flooding in Vietnam in October 2020, climate change was found to have only a limited role in the heavy rainfall events that triggered the floods. The fact that the WWAI doesn’t implicate climate change in every event is, to my mind, an indicator of scientific integrity.

What’s the takeaway message? It’s that with a little preparation by the teacher,  a science classroom can be a hospitable place for students to address questions about whether, in what sense, and to what extent the evidence shows that climate change causes extreme weather events. Indeed, NCSE has a set of activities* designed to help your students explore this topic and correct any misconceptions they might have about the relationship between extreme events and climate change.

In 1974, the super outbreak of tornadoes that destroyed Xenia was perceived to be a horrendous but essentially random event. Even now, the relationship between climate change and tornadoes remains one of the most challenging of the many varieties of extreme weather events to tease apart. But the increasing severity and frequency of extreme events from fire to flood to drought to heat waves is becoming more predictable. And while that’s hard news to absorb, it at least means that instead of feeling helpless, students can begin to think about what they can do in their own communities to prepare for and reduce the risks posed by local extreme events.

*The set of lessons featured in the classroom activities mentioned in this blog post were designed and created by NCSE. NSTA staff were not involved in their creation or evaluation.