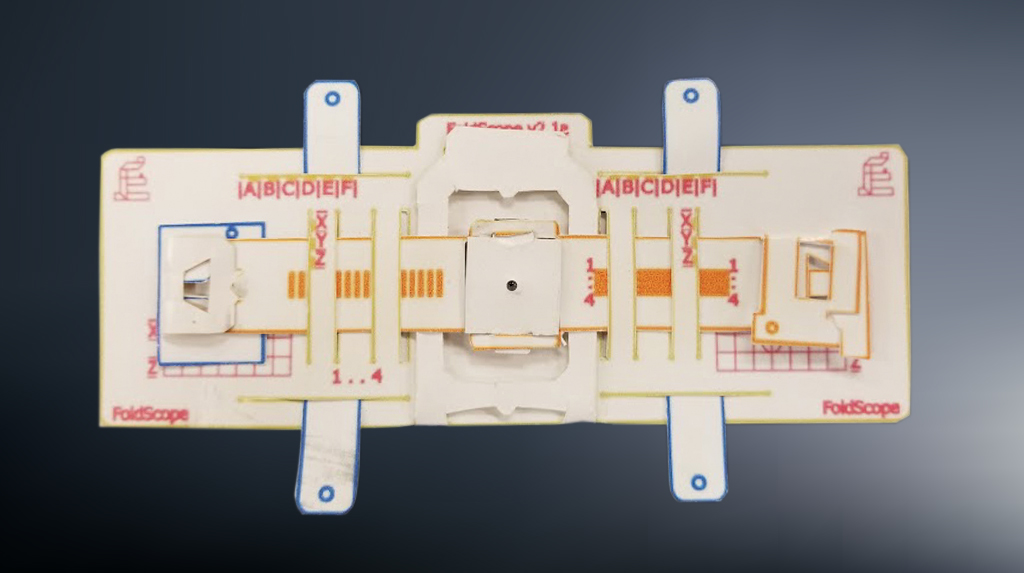 The Foldscope is an origami microscope developed at Stanford University (Figure 1) and can be constructed for less than $1. The device is assembled by printing the freely available template onto cardstock and following the instructions in the video created by Gannon students. Precut classroom kits are available for a reasonable fee to simplify the assembly process.

The Foldscope activities consisted of three sessions, each lasting between 45 to 60 minutes. The first session, led by a biomedical engineer, introduced the importance of microscopy in STEM disciplines and demonstrated how to build the Foldscope. GO College staff and tutors, along with Gannon faculty, worked with two-person groups as the video was played in sections so participants could follow the assembly steps. 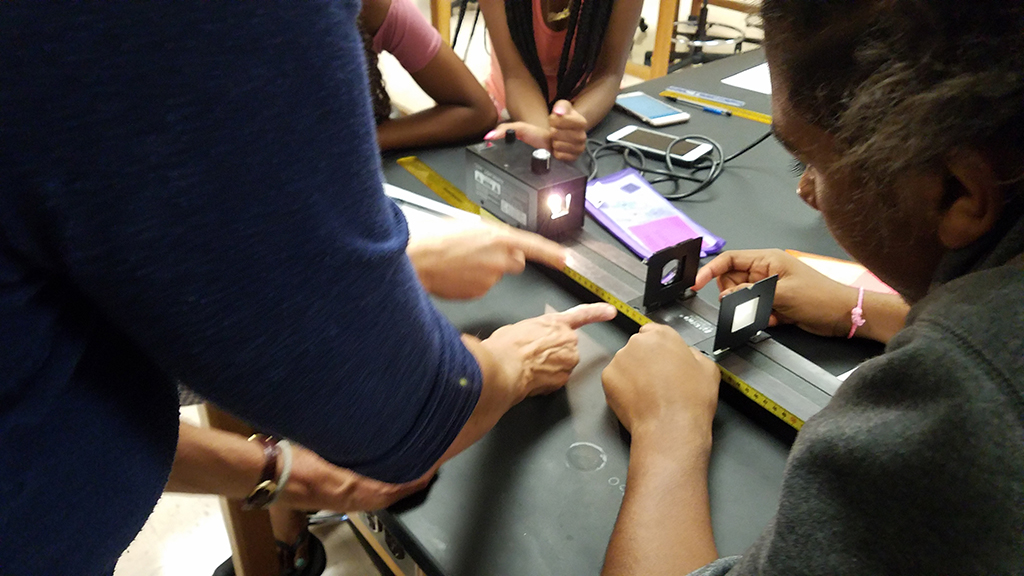 During the second session, a physicist presented the fundamentals of geometric optics, building from simple refraction to a two-lens optical system, to help students understand the basic operating principles of a microscope (Figure 2). For simplicity, the discussion was limited to thin lenses instead of the Foldscope’s spherical lens. A physical approach using ray diagrams and optics kits was developed instead of introducing the thin lens equation.

During the third session, a biologist guided students on how to use the Foldscope. A brief interactive lecture on the factors that affect image quality was first given. After the lecture, students were given various prepared slides such as lilium anthers (pollen), ticks and mites, and bone to view. They also learned to prepare and stain slides using cells scraped from the inside of their cheeks and phytoplankton collected from Lake Erie. Finally, students were instructed on how to use their cell phones to take pictures with the Foldscope (Figure 3).

Photos taken with the Foldscope can be shared with Microcosmos, the online Foldscope community. On this community website, individuals can share their photos once they register. The website also has tutorial videos for how to assemble and use the Foldscope, including how to prepare slides.

Prior to beginning the program, we surveyed students about their interests and attitudes toward STEM. In our presurvey, 65% of students felt they were good at math and science. Interestingly however, only 41% and 48% of students felt they could do advanced math and science work, respectively, suggesting that at this age student self-efficacy is already decreased. Most students were interested in careers in medicine and had the least interest in math, environmental science, Earth science, and physics careers. Students were then surveyed after the program to evaluate our impact. In our postsurvey, 97% of students responded that our program increased their interest in how science and technology work together, 90% said it increased their interest in the microscopic world, and 87% said it increased their interest in how engineers build things. Many students also felt they appreciated more how math is applied in technology (67%). When asked what they liked best about the program, students’ comments included, “learning to make something so complicated at home with just paper.”

Forty percent and 60% of students, respectively, agreed with the postsurvey statements “I feel more confident that I can learn and do things related to science” and “I feel more confident that I can understand how something works.” Moreover, our program had a positive effect on broadening students’ interest in a STEM career, as 50% of students agreed with the postsurvey statement “I’m more open to a career in science, technology, engineering, and math.” These data demonstrate that one-day outreach programs such as these can have a positive effect on not only student interest but also their sense of confidence and ability in STEM.