In its position statement on the teaching of evolution, the National Science Teaching Association calls for evolution to be emphasized in state science standards “in a manner commensurate with its importance as a unifying concept in science and its overall explanatory power.” Just as three states—Pennsylvania, South Carolina, and Texas—are engaged in the process of revising their state science standards, the results of a recent survey from the National Center for Science Education and Penn State, described in a new article published in the peer-reviewed journal Evolution: Education and Outreach, confirm the importance of including a scientifically accurate and pedagogically appropriate treatment of evolution in state science standards.

The survey, conducted in 2019, was designed to replicate a similar national survey conducted in 2007. In both surveys, the teachers were asked to answer a handful of questions about what themes they emphasized in their classes. On the basis of their answers, they were assigned to one of four categories—call them Eve, Avery, Mimi, and Craig. Eve emphasizes the broad scientific consensus on evolution while not giving any credence to creationism. Avery avoids endorsing evolution or creationism, while Mimi sends a mixed message by endorsing evolution but also endorsing creationism as a valid scientific alternative to evolution. And Craig endorses creationism while not endorsing, perhaps even disputing, evolution.

The improvement was dramatic. In 2007, Eves were a slight majority, at 51 percent. In 2019, they were a commanding majority, at 67 percent. And the proportion of Averies, Mimis, and Craigs decreased correspondingly: from 18 to 15 percent for Averies, from 23 to 12 percent for Mimis, and from 8.6 to 5.6 percent for Craigs. Part of the reason for the improvement was the widespread adoption of the Next Generation Science Standards, which include evolution as a disciplinary core idea of the life sciences. The evidence suggests that the adoption of the NGSS impelled both novice and veteran teachers to upgrade their content knowledge of evolution in order to be able to fulfill the increased expectations of the new standards. 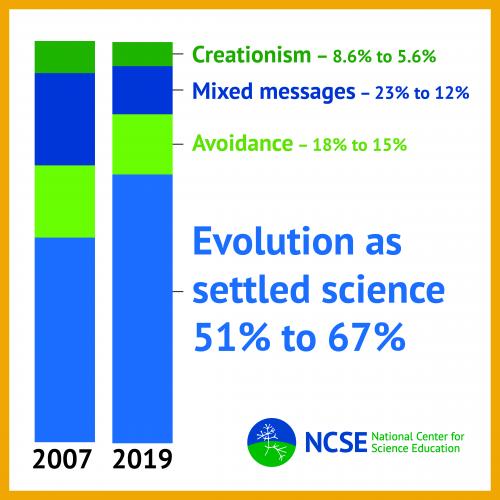 Testimony to the importance of including evolution in the state science standards was provided by a teacher from Pennsylvania, who commented (in answering a free-form question toward the end of the survey’s questionnaire), “Basically, what I teach in my classroom is directly influenced by the [Pennsylvania] Biology Keystone State Standards. I take the essential statements that [the Pennsylvania Department of Education] puts out and use them to direct my teaching. Sadly, if it[’s] not in one of those statements, I don’t teach it.” In contrast, a colleague in Texas lamented that although “I would love the permission and ability to teach an introductory high school biology class with the unifying theme of evolutiona[r]y biology ... I live in a big state that is considering including creationism” in its standards.

With all due respect to the Texas teacher, it’s unlikely that any proposal to include creationism explicitly in state science standards would be seriously entertained, even in the Lone Star State: such a proposal would be recognized straightaway as not only inappropriate but also unconstitutional. Similarly, it’s unlikely that any proposal to exclude evolution from state science standards would be seriously entertained, although in 2014, a state senator who fought tooth and nail against improvements to evolution education in South Carolina managed to block a single high school biology standard addressing natural selection. (As a result, the standards currently in place there awkwardly proceed directly from H.B.4 to H.B.6.)

Instead, the real threat to the treatment of evolution in state science standards is posed by proposals for the standards to provide teachers with the opportunity to instill or reinforce scientifically unwarranted doubts about evolution in the minds of their students. In 2009, for example, the Texas state board of education took it upon itself to insert cryptocreationist passages—calling for students to analyze “all sides of scientific evidence” and to evaluate claims about “sudden appearance, status” in the fossil record, “the complexity of the cell,” and “the DNA molecule for self-replicating life”—in the Texas Essential Knowledge and Skills, a decision not rectified until 2017.

A lot is at stake. More than half a million students take a biology course in the public schools of Pennsylvania, South Carolina, and Texas every year, to say nothing of the millions of students across the country whose textbooks might be affected by the content of the Texas standards. Every single one of them deserves the chance to understand that there is a broad and deep scientific consensus on evolution as the core concept underlying all of biology. Their chances are better if Eves rather than Mimis, Averies, or Craigs are in charge of their classrooms. And as the results of the NCSE/Penn State survey show, improvements in the treatment of evolution in state science standards tend to produce improvements in classrooms. 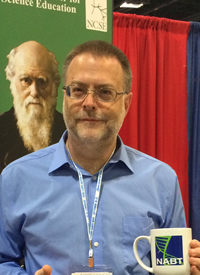 Glenn Branch is deputy director of the National Center for Science Education, a nonprofit organization that defends the teaching of evolution and climate science. He recently contributed "Anti-intellectualism and Anti-evolutionism: Lessons from Hofstadter" to the April 2020 issue of Kappan.

Service Animals in the Science/STEM Laboratory