Exploring sound and music as part of science learning 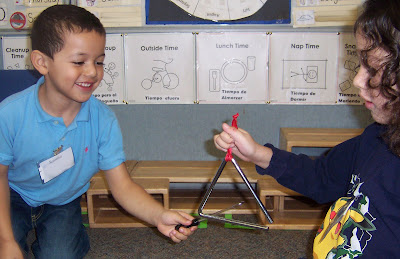 Exploring how sound is made is one way music is used in early childhood classrooms. I like to use a triangle to focus children’s attention on the tiny movement that generates the sound. They touch the still triangle and then remove their hand. I strike the triangle to make the sound and they touch it again (and shiver or giggle as the vibration tickles their fingers).

Next we pass the triangle and striker around the circle and one child holds the triangle while the other uses the striker. This way no one person can monopolize the equipment and we all get to feel the vibrations again. Sometimes in passing the triangle a child will hold the side of the instrument rather than the string and the resulting “thunk” (rather than a musical note) opens a discussion of how to change sounds.
Early childhood advocate and musician Miss Jackie lists many other reasons for using music in her November 11, 2010, blog posting, Music belongs in early childhood classrooms:

Taking Stock of Implementation Across the States