A visit to Zhouzhuang 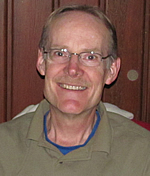 Today the focus was on history, culture, and some shopping. The delegation went to Zhouzhuang, described in the guide book as an ancient town known for its Venetian-like waterways.
Leaving Shanghai took about 50 minutes before the landscape had regular trees with some open space. We traveled 20 more minutes before the landscape became rural. The town before Zhouzhuang seemed poor. There were many visible signs of manual laborers carrying out what would be considered mechanized tasks in the U.S. We saw people using hand held balances for weighing objects, harvesting without a tractor, drying rice and bagging it, and assisting with road repaving. On the one hand China is very capable, yet it is still very much a developing country. The situation is confusing to see because the contrasts are large.
Zhouzhuang is over 900 years old with houses built during the Ming and Qing Dynasties. There are about 100 houses with courtyards, 60 of which have arch gateways made from carved bricks. This area is very agricultural and produces a great deal of rice for a good portion of China.
The village had great arching bridges, many stores with hand made crafts and commercial tourist souvenirs, and gondolas that take people through the waterways. The combination of old and new gave me the sense of being lost in time. We were told that the waterways were almost destroyed in the effort to develop the area but subsequently saved as a historic area so that future generations could see the way people used to live. A good thing, since so much has changed that in my opinion China stands to lose much of its architectural, not to mention cultural treasures, in the spirit of development.


no images were found