Q: Is It Really Caused by the Bernoulli Effect? 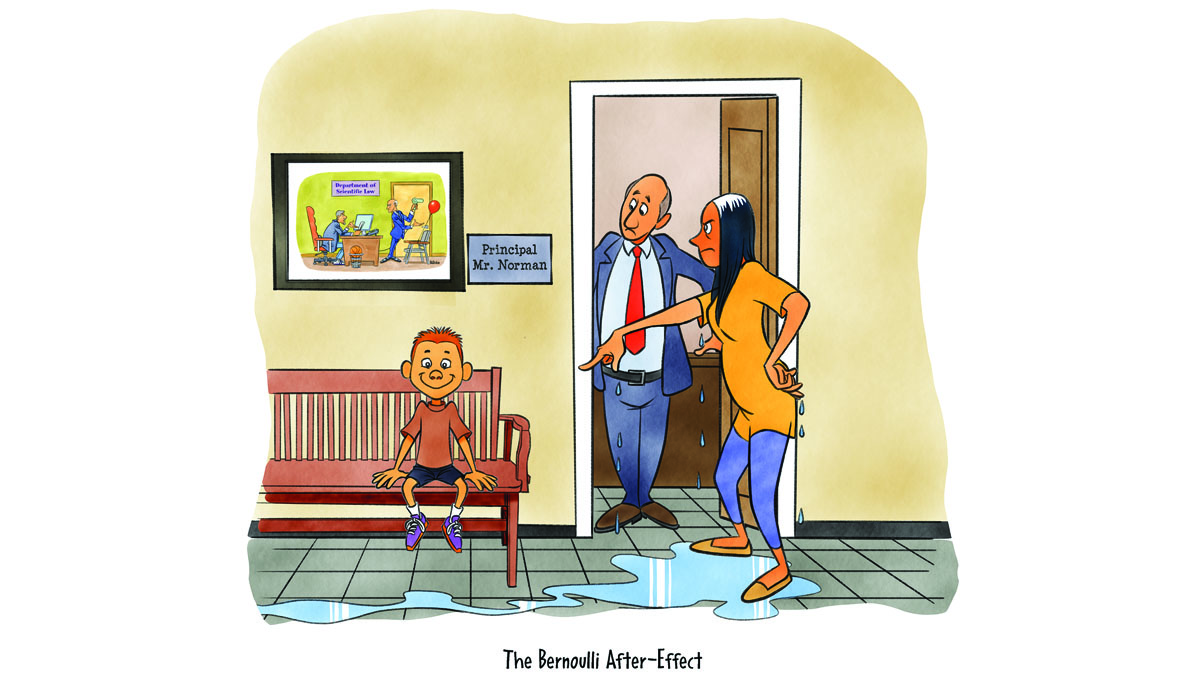 A: Probably not. I’ll give you the bottom line first: Almost all classroom activities that purport to demonstrate the Bernoulli effect do not actually involve the Bernoulli effect. Let’s explore this idea. You may have heard the term Bernoulli effect referring to faster-moving fluids having a lower pressure. (In science, a “fluid” can be either a liquid or a gas.) Most classroom activities designed to demonstrate this involve moving air. It is commonly taught, especially in middle school, that faster-moving air has lower pressure than the surrounding, stationary air. So you might want to show this article to any middle school teachers that you know.

I’ll start by explaining a little about the Bernoulli effect—what it is and what it isn’t. Then I’ll give you some example activities that you might think of as discrepant events—perhaps contradicting something you were pretty sure about.

Before we get to the Bernoulli effect itself, one basic principle to know is that a fluid—such as air—will always move from a higher-pressure area to a lower-pressure area. This is what happens when the wind blows. The air is being pushed from a region with high pressure to a region with lower pressure. So if you want to detect a difference in air pressure, just check for moving air. For example, when you run a vacuum cleaner, you know the air is moving because you see dirt getting dragged in by the moving air. And the reason the air is moving is that it’s being pushed from a region of higher air pressure outside to a lower-pressure region inside. And the reason there’s lower pressure inside the vacuum cleaner is because the machine creates a partial vacuum there by blowing out air. That’s why it’s called a vacuum cleaner!

Now to the Bernoulli effect! To make it easier, we’ll take it in four easy steps:

One Way to Demonstrate the Bernoulli Effect

Turn on an outdoor faucet and observe how fast the water comes out of a garden hose. Now gradually cover the end of the hose with your thumb. What happens to the water stream? The more you cover the end of the hose and constrict the flow, the faster and farther the water shoots out! And you can feel the increased pressure on your thumb as you block off the opening. The constriction you created is like the neck in the pipe in Figure 1. You have demonstrated the Bernoulli effect! (Figure 2). If you have a sink in your classroom, you might be able to hook up a tube or hose to the faucet and, turning on the water just a little, let students experiment with putting a finger over the end of the tube, increasing the speed of the water coming out of the hose and—hopefully!—into the sink. A little misdirected water spray will add to the excitement (but might result in someone getting wet, as in the cartoon on the previous page).

Here’s the news: None of these phenomena is the result of the Bernoulli effect. The usual “Bernoulli effect” explanation for all those phenomena is that the moving air has lower pressure. However, the moving air does not have lower pressure. I’ll discuss the misconceptions in more detail later on. But first, let’s look at some investigations that you and your students can do that show that moving air does not, in fact, have lower pressure. This is different from your usual activities where you’re trying to illustrate some phenomenon. Here we’re sort of doing the opposite—showing that a particular idea is not correct. Sometimes scientists will do an experiment that demonstrates the absence of a phenomenon. This is similar to how physicians will sometimes run a test to rule out a particular cause. So here are some investigations that allow students to discover that faster moving air does not have lower pressure and, thereby, to “rule out” the Bernoulli effect as the explanation for these phenomena.

Blowing Air Next to Paper

This works for horizontal paper too: The high-speed air coming out of your mouth is at normal atmospheric pressure. If you blow across the top of a flat piece of paper, it will not rise, no matter how hard you blow. Just lay the flat paper on a table and have students blow over the top of the paper. It doesn’t rise as it would if the moving air had lower pressure (Figure 3b, p. 77). It will rise a bit if air is blown under the paper.

Air is invisible, so we don’t directly see it moving. But, like the dirt getting swept into the vacuum cleaner, sometimes there are particles in the air that make its motion visible. Steam is an example of this. Whenever you see steam shooting out of an opening (Figure 6), the stream does not get narrower as it moves along. That’s a key observation because, if the stream had lower pressure than the surrounding air, then the greater pressure on the outside would squeeze the stream and make it narrower as it goes along. But that’s not what we observe, so we can rule out the idea that the pressure is lower in moving fluids (or at least in fluids like these, which are not confined in pipes, but are moving out in the open).

Test for a Widening Air Stream Yourself

Move the vacuum cleaner hose to the exhaust port so it’s blowing out air. One student can hold the hose, while another student places her hands close to the nozzle (i.e., about eight inches above the nozzle, if it’s pointing upward as in Figure 7) and moves her hands together or apart until she can just barely feel the air flow (Figure 7a). Then ask her to move her hands about eight inches away from the nozzle and again separate her hands until she can just barely feel the air flow (Figure 7b). Are her hands now farther apart than the first time? Yes! The air stream has spread out—just the opposite of what would happen if the air stream had lower pressure and got squeezed by surrounding, higher-pressure air. So a stream of air does not have lower pressure out in the open.

So, if you think about all those demonstrations that claim to show that moving air has lower pressure, like blowing between two suspended balloons and seeing them come together, that’s not due to the air having lower pressure as a result of the Bernoulli effect. So what does cause the balloons to come together? What did cause the bowl of the spoon to get pulled toward the water? What does cause the ball to remain suspended in a stream of air blown out of a hairdryer or vacuum cleaner? I’ll have to leave you in suspense, as that will be the subject of another Science 101 column in the near future.