Career of the Month: Aerospace Engineer

January 2013, Based on Interviews With Professionals Using Science in the Workplace 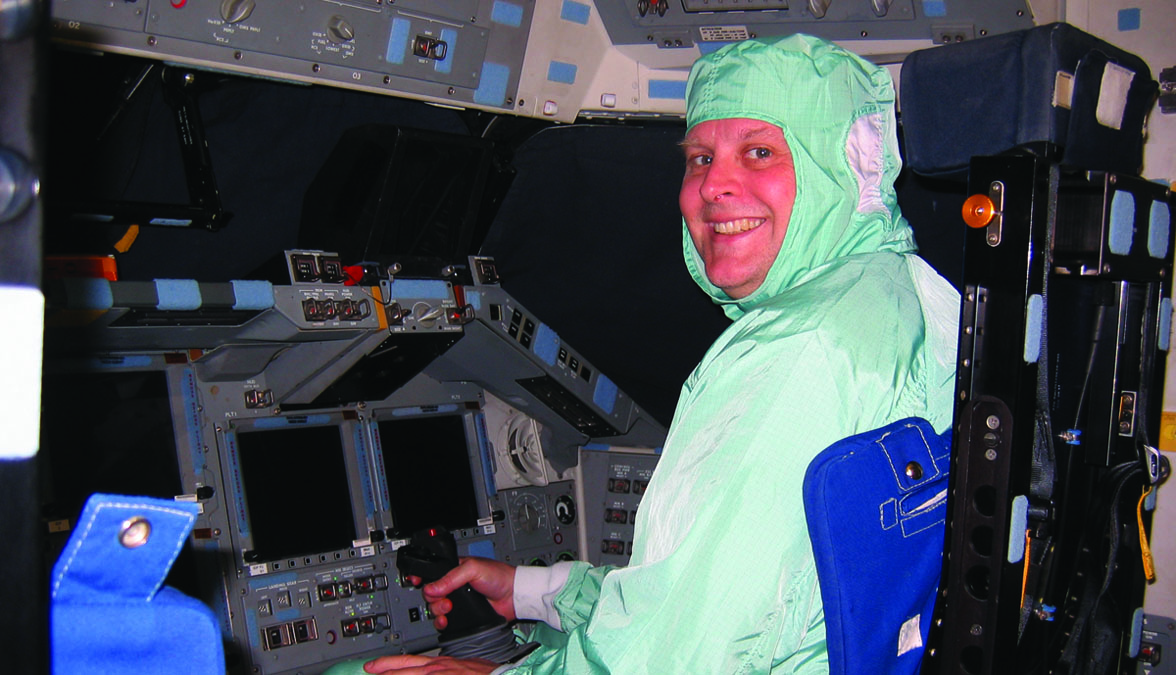 I evaluate how NASA technology can help businesses. Some of the things we’ve developed can be transformational when applied to other types of products. My role is to either help a company resolve a technical issue, give them options, or put them in touch with the appropriate colleagues, and then monitor the progress. For example, we established a partnership that allows a company to use a material alloy that was developed for rocket nozzles. Because of its physical characteristics, it’s probably well suited for welding electrodes, too, and should last three or four times longer than the material now used for them. A welding shop is testing it.

At age 10, I took apart and put back together our family stereo. In high school, I did well in chemistry, physics, and math. I realized I wanted to do something with science; I just didn’t know what.

In college I started out in chemical engineering, but during my freshman year, I had a lousy chemistry teacher, which led me to switch to civil engineering. This required me to study a wide range of subjects, including chemistry, solid mechanics, and structural dynamics.

To earn money, I worked in the university’s civil engineering labs. When I graduated, NASA offered me a graduate fellowship. While earning my master’s degree in solid mechanics, I was also conducting research at NASA’s Glenn Research Center. When I finished my degree, I was offered a job at NASA.

In a short time, I became one of NASA’s most respected high-temperature materials and structures experts. For about 18 years I worked on the design, development, and operations of vehicles such as the space shuttle and space station, including their propulsion and power-generation systems. I had to determine what might cause a failure and how to prevent it; or, in cases where a failure had already happened, what caused it and how to fix it. I had to understand how materials degrade, and I helped develop new materials and new ways of studying materials. I also had to learn about propulsion systems and advanced structures, and aeronautics.

I then became a high-speed propulsion expert. I spent six years leading a team of NASA and Air Force engineers in developing a high-speed turbine engine (for a hypersonic vehicle) that could reach Mach 4. I also worked on the X-43, a record-breaking, airbreathing vehicle that flew at Mach 9.6. After that, I worked on another experimental flight program called Ares I-X, which resulted in a successful flight at the end of 2009. I was then assigned to other projects and eventually became involved with the external partnerships office, where I now work.

I loved being part of the last three successful experimental vehicle (X-vehicle) programs that NASA conducted. It’s nerve-wracking but also exciting. For Ares I-X, I conducted a modal survey test (which determines how a structure will dynamically respond to external forces) on the 100-meter-tall rocket. After working several years on a flight-test program with a team of hundreds, you get to flight day when you hit the button and cross your fingers and know that if you did your job right, it should fly. You get really emotional, I’ve seen grown men cry with happiness when the vehicle performed as expected.

After the flight, you’re on cloud nine for a couple weeks while you pull together the final report. Then there’s a letdown, when you realize that this close-knit team, which has been like your family for the past several years, will leave for other projects.

No one knows everything, and you shouldn’t be afraid to ask questions. There was one instance when I didn’t think something through properly, and a piece of equipment broke, costing thousands of dollars to fix. But I never made that mistake again. Even though I have a PhD, I have colleagues without college educations who are smarter than me. Look for advice from unexpected sources. One of my greatest inventions was done with the help of my mechanic.

I’ve always looked for older engineers to serve as mentors. When I started working at NASA, I spent a lot of time listening to older engineers and their lessons. I realized that they can teach you things that are not in textbooks. Students should look for internships or summer jobs where they’ll be exposed to such people. Finally, gain real-world experience by looking for internships or summer jobs that expose you to many different types of opportunities.

A Personal Journey to Classroom Success