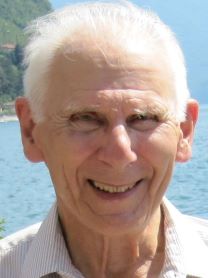 Uri Haber-Schaim, a leader in science education for more than 50 years, died September 16, 2020, in his home in Jerusalem, Israel, at the age of 94. In 1970, Haber-Schaim received the American Association of Physics Teachers Oersted Medal, awarded for “outstanding, widespread, and lasting impact on the teaching of physics.”

And as noted on https://www.bems.org/node/430, “One of the most original, creative and effective [physics courses], specifically aimed at teaching physics, was developed beginning in about 1958 and throughout the 1960s by Uri Haber-Schaim of the Massachusetts Institute of Technology, with scores of other physicist authors…The physics course Haber-Schaim and colleagues…developed for secondary school students…is known as PSSC, the Physics School Study Course.”

In 2007, in honor of his work on PSSC Physics, Haber-Schaim received the first Excellence in Physics Education Award from the American Physical Society: “For the revitalization of subject matter through the involvement of teachers and researchers at all levels, the elevation of the instructional role of the laboratory, the development and utilization of innovative instructional media, and the emphasis on discipline-centered inquiry and the nature of physics, PSSC Physics has had a major and ongoing influence on physics education at the national level.”

Convinced of the advantages of studying the physical sciences in junior high school, Haber-Schaim’s group developed and prepared the laboratory-oriented year-long course for eighth and ninth grades, Introductory Physical Science (IPS). The course dealt with the basic properties of matter and led to the development of the atomic model of matter. IPS became so widely used that much of the introductory material it covered was eliminated from PSSC Physics by the third edition.

In addition to his role in the creation, evaluation, and revision of curriculum materials and equipment, Haber-Schaim sought to expand the ranks of qualified science teachers. He designed teacher-training programs and conducted workshops and institutes all over the United States and in many other countries, from Chile to Japan.

Haber-Schaim is survived by his wife of 73 years, Shlomith, and two daughters, a son, and three grandchildren.

How Renewable Energy Can Improve Communications in Developing Countries