Practice What You Teach

As a science teacher, I encourage my students by telling them, “Step outside of your comfort zone, and that is where amazing things will happen.” I found that to be true for myself as well. Recently, I stepped way outside of my classroom comfort zone, and magic happened.

In the classroom, I often provide my students with optional enrichment activities to further develop their love for science. In the past, my students have participated in such activities as Science Olympiad, the DuPont Challenge, ExploraVision, and Future Engineers challenges, even sending their names to Mars! By offering them these opportunities, I am lucky to have witnessed just how capable and incredible middle school students can be.

I believe that because of my involvement in these educational opportunities for students, my name was given to a casting director seeking teachers who excelled in building, engineering, design, and architecture for a new, fun competition-style series to be featured on the new streaming network, Disney+. After an extensive process of interviewing and background checks, the producers thought I would make a great coach on the series, titled Shop Class. It featured 18 teams of three competitors, two kids (ages 11–15), and their coach. In each episode, three of the teams would compete with one another in an engineering design challenge to be judged by two industry professionals and a Disney Imagineer, who researches and develops ideas for the Walt Disney Company. The winning build from each challenge would advance to face one another in the semifinals.

The competition’s premise seemed familiar, and I was confident in my understanding of the science and engineering practices that are routinely implemented in a science classroom. However, on Day 1 of my introduction to the other teams on the set, I felt a bit out of my league. In the first round, both of my competitors were highly skilled wood crafters. While I knew I could coach these kids, I did question why the producers would choose me, a science teacher and Science Olympiad coach. My forte included using problem-solving skills to design and build devices. But I convinced myself that while I may lack skills in crafting compared to my competitors, my ability to design to function would be my asset.

The task for the qualifying round was to design and build a miniature golf hole using only the supplies provided. As a science teacher, I felt comfortable with the material constraints, as I had often assigned projects such as Newton’s scooters, bridges, catapults, egg drop devices, and Rube Goldberg models that required household items that can be repurposed.

The first time I met or spoke with my teammates, 11-year-old Marco and 14-year-old Daron, was on the set of Shop Class with cameras rolling. It had been my experience in the classroom that team dynamics could make or break a project. I knew that the initial meeting with my team was important, so once given the challenge, we quickly began brainstorming. Most important, we chatted and got acquainted. We discovered one another’s strengths and weaknesses while bonding and building.

Ultimately, not only did we design and build the winning golf hole, but it was also science-themed. It was the 50th anniversary of the Moon landing, and our course was aptly named Moon Shot. We advanced to the semifinals, and I have no doubt that my experience in routinely coaching kids in the classroom to solve problems and design solutions as a team made the transition from classroom to competition go smoothly.

In the semifinals, six teams competed for three spots to advance to the championships. The challenge was a science teacher and a Science Olympiad coach’s dream: Design and build a rocket with an egg payload that would safely deliver the eggs down to Earth. I felt we had an advantage for this task because we really worked well as a team, and it was noted by the judges.

The first thing we did for this challenge was again to define the problem and brainstorm a solution. We believed three eggs was the magic number to help us stay under our weight requirements for the rocket design. The original design included a compartment at the top of the rocket that would carry the eggs up to the optimal height, at which time a parachute would deploy and land them safely.

Once again, our team devised a great theme. The rocket was named Ham and Eggs after the first primate in space, named Ham, and “eggs” because it had an egg payload. After creating a prototype and during the testing process, it became evident that our design would work; however, judging was based on two categories: design creativity and build functionality. We decided the design and build of the rocket itself was good, but since other teams had a similar design, we chose to redesign our lander with both creativity and functionality in mind.

Again for this challenge, we could only use the materials provided to us. We returned to brainstorming an alternative solution for landing our eggs safely. After perusing the provided materials once more, we noticed the gloves we received to protect our hands from the glue adhesive. We developed a unique plan to repurpose the gloves and use them to create three separate “landers.” Each lander would attach to a ring on the nose of the rocket. The individual landers would consist of an egg in the middle glove, and each finger of the egg glove would be tied to another inflated glove. The glove balloon system would work like an airbag, allowing the eggs to land safely much like when Pathfinder landed on Mars.

It was during the testing of this lander prototype that a NASA engineer actually came to the set to talk to us about our rockets and landing system. Our team could not have been more excited as we consulted with a NASA professional about the rocket and lander. It was such a fantastic real-world learning experience for both the kids and me, and great to hear advice and praise for our unique design.

On launch day, we were certain we had the most creative design, but could it function? Of the six teams who launched rockets, three teams landed successfully with two or more eggs. Ham and Eggs proved worthy, so we advanced to the championship round, in which one team would earn the title Shop Class Champs.

In the championship round, I believed we were the team to beat regarding teamwork. My team was not only competing in a rigorous competition, but also engaged in learning and problem solving, and having fun the whole way. But this time the challenge was the biggest yet, and compared to the other coaches, my skill set was not in building structures as much as in creating devices. The challenge was to design and build an adventure pod that all three team members could enjoy simultaneously within a three-day time constraint. This build did require scientific and mathematical understanding of areas such as measurement and the engineering design process, but I felt then that the other coaches who were CTE (Career and Technical Education) teachers had a bit of an advantage.

My team began as we did all other tasks; we collaborated and brainstormed, recorded our ideas on paper, and planned. The boys and I all have something in common: We have an adventurous spirit and pride in our country. We designed a camouflaged backyard fort with secret compartments and escape routes, fishing poles, games, and treasure hunts. Tom Sawyer would have been proud of our backyard adventure, and we must have impressed the judges as well, as we won the whole darn thing!

Looking back, I have no doubt that being a science teacher (who routinely practices NGSS in the classroom) helped lead our team to victory. In science, we regularly teach our students to solve real-world problems using Science and Engineering Practices. This time, I was on the same team as the kids, and I followed the same principles I had been teaching in my classroom. I was right there along with Daron and Marco as we collaborated, struggled, made mistakes, problem solved, and tried new ideas. I am extremely fortunate to have had this opportunity to work hand-in-hand with such amazing kids and practice what I teach. 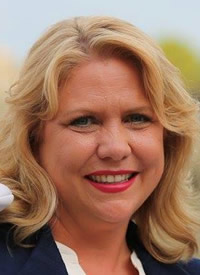 Kim Kocaya is a middle school science teacher and Science Olympiad coach at Bella Vista Middle School in Murrieta, California. She is an NSTA member, DuPont Challenge winning teacher and the Season 1 Shop Class Champ on Disney+. Follow her on Twitter @MrsKteaches.

Note: This article is part of our new NSTA member spotlight series. Interested in being a guest blogger and sharing your story with the NSTA community? If you are an NSTA member and have done something extraordinary either inside or outside the classroom, then we want to hear from you. Send an e-mail detailing your story. If you are selected you will be contacted about writing a guest blog, which will be featured on our website.