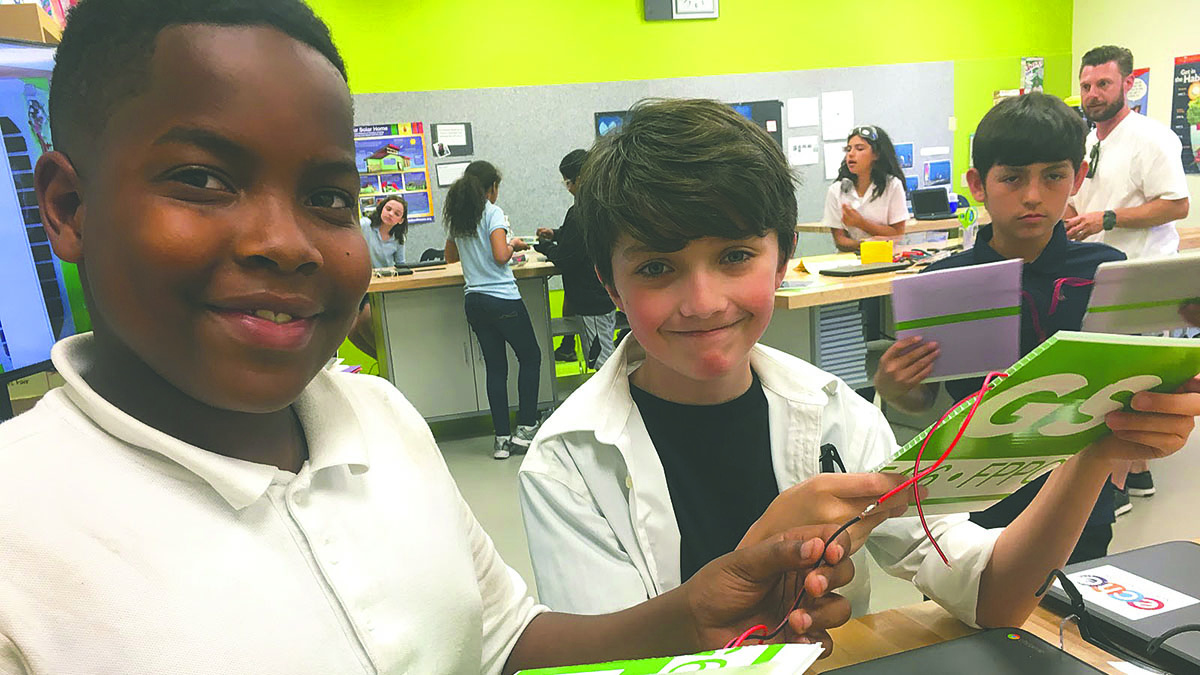 In a dim classroom last year, eighth graders struggled to take notes by the light of a single projector and a few flashlights. Kenisha Hewing, eighth grade science instructor and science department chair at Kennedy Middle School in Charlotte, North Carolina, wanted her students to relate to the challenges faced by students in developing regions that lack reliable access to electricity. She says the poorly lit classroom helped “students realize not everywhere is like the United States” and provided the foundation for a project-based learning unit on solar energy that culminated in her students assembling stand-alone solar arrays referred to as “solar suitcases,” two of which have been sent to Africa as part of the We Share Solar program (www.wesharesolar.org).

“This is an experience that I wish every student could have, something I wish every teacher could experience,” says Hewing. “Students were able to apply the concepts that are learned in the classroom to a global impact project and see a real-world benefit in another country within one school year.” In addition, her students’ state and district assessment scores were highest on the energy sections.

Gigi Goldman, co-founder and strategic advisor of We Share Solar, says their goal is to “raise the next generation of global change makers through learning about, building, and sharing solar energy systems called We Share Solar Suitcases.” To do that, the program—funded through grants by corporate partners including Wells Fargo, PG&E, Excel Energy, and Sun Power—begins with two-day teacher workshops targeting middle and high school. They cover “the basics of solar energy…[and teachers] build a solar suitcase.” According to Goldman, the suitcases—which can light two to three classrooms and charge cell phones, e-readers, and laptops—are deployed in countries including Kenya, Uganda, and the Philippines where reliable electricity is scarce, particularly in rural areas.

The curriculum also focuses on social studies, including the geography of the region where the suitcases will be sent and the challenges facing students in these regions. Students usually work in teams of four to assemble the suitcases, learning about circuitry and current as they go.

“We do it all in one school year,” she says. “Students are done building in November, and everything is installed over the winter months. They receive [pictures and stories] back in May and are inspired by the fact that they have built real-world technology that is improving someone else’s life chances.”

Jennifer Garcia, seventh- and eighth grade science teacher at Westmore Oaks Elementary School in West Sacramento, California, remembers feeling intimidated when she started the We Share Solar training in 2015. “When I first got there, I looked at what was happening and thought, ‘There’s no way I can do this. I’m not mechanical,’” she recalls. “I was just amazed I was able to complete it.

“The first year, my students built six suitcases; we sent two to the Philippines [the] next year,” she says. She initially taught the We Share Solar curriculum as a unit within a larger course, but she is now teaching it as an elective class for sixth, seventh, and eighth graders. “Students in my electives need a different approach [to learning]…[they need] all handson. Kids who might have gotten in trouble in other classes [find] in this class, it’s a completely different style of learning, and it completely impacts the behavior and attention [of] students who might have challenges,” Garcia asserts.

“We will receive pictures…before the end of the school year. I have one picture from a prior year of the [Kenyan] students holding a group picture of my students; looking at it makes me emotional,” Garcia says. “It’s more real [for students]. We can research the schools; it feels like it is more full circle. There are real students whose lives are going to be impacted.”

As an early participant in We Share Solar, Garcia has seen the program evolve. “When I started doing it, the suitcases were much larger.…The instruction manual is amazing. The manuals have pictures of students from my first year!” she exclaims.

“The first year was the hardest. We tried to do it in two days. It was mentally exhausting…fitting it into the schedule was the most challenging part,” Garcia says. “I love being part of the program. For me, it’s the only time I’ve been able to make a worldwide impact, the only opportunity in my life to help people in such a dramatic way. It’s neat; [my students are] learning engineering practices…and resilience.…I hope they think about it all the time. Some kids sign up for my class hoping for part of this project. It’s the largest turnout of my electives.”

The program shows students that their “effort [and] dedication can change lives today. That inspiration can draw girls and other underrepresented demographics” into the renewable energy field, according to Goldman, who asserts that less than 24% of employees in renewable energy are women. She hopes to eventually expand the program so the students who will be using the solar suitcases will be building them as well.

“The solar suitcase is plug and play. Recipient students in places like Kenya learn about how solar works by actually using it every day, and we have an accompanying curriculum that helps them understand how it works.…For these students who have grown up using kerosene and candlelight, learning about and using solar energy is particularly exciting as it will play a significant role in their future energy access. If these students can ultimately build their own electricity in the We Share Solar program, it will be magic,...breathtaking to witness,” Goldman says. “I believe that much like how China leaped straight to cell service instead of laying phone lines, many of these rural settings in sub-Saharan Africa will go straight to distributed renewable energy sources like solar longer term.”

Kim Schouten, a sixth-grade teacher at Washington Elementary School in Sacramento, California, used knowledge she gained at a Solar Schoolhouse (http://solarschoolhouse.org) summer institute to lead her students through a two-year service learning project. The school’s drumming instructor shared his experience growing up in Nigeria in a region with scarce electricity with Schouten’s students, inspiring them to build and send solar kits to his native home.

Working with Solar Schoolhouse, Schouten was able to get enough funding for each student to design and build one kit. Schouten, who looped with her students from fifth grade, said half of the kits were built in the first year, with the remainder completed in the second year.

“It was interesting for me to see the evolution in design and skill set of students from the year before,” Schouten asserts. “When I take a step back and look at what students were doing—what they were really learning—they seemed like simple, easy concepts, but really were more complex. My students took it above and beyond any expectations I would have put before them. They were making connections more like high school students, making independent research connections…their content knowledge went through the roof. They were very excited, very engaged. They had to demonstrate understanding of content” before they could build their solar kits, she explains.

“We were covering science, math, language arts, engineering, and technology in the project. Math: They had to calculate packaging, shipping; they were measuring wiring, researching different types of energy, the carbon cycle. They were writing different pieces: brochures, step-by-step instructions. For engineering, they were drawing out…designs. Technology was designing and sketching 3-D graphic designs,” Schouten continues.

“This project is something that helps them, empowers them. They have answers, not just fears. And it’s part of the [Next Generation Science Standards (NGSS)] by making models,” she notes.

At Solar Schoolhouse, “our primary audience is K–12 educators, though we are starting to do more with non-classroom educators,” says Tor Allen, executive director of The Rahus Institute, which runs the Solar Schoolhouse program. “Mostly funding has come through electric utility public benefit funds here in California.…We’ve developed lessons, activities, curriculum, and solar cell kits/ projects that can be used anywhere... We continue to work toward lessons that can be utilized ‘out of the box’ by teachers, not requiring a workshop as introduction.”

Allen says about 280 teachers have participated in the summer institute since 2003, and more than 2,000 have taken part in one-day local workshops. “Many schools are looking for ‘engineering’ projects to include in their NGSS science curriculum. Small solar projects, with multiple design options, are a great hands-on way to pursue this. There still is some hesitancy to go beyond the classroom and reach into the local community (or a remote community) to make that connection, and strengthen the project experience.  If classes do this, a sense of empowerment follows that is invaluable,” he claims.