Pathways to the science and engineering practices 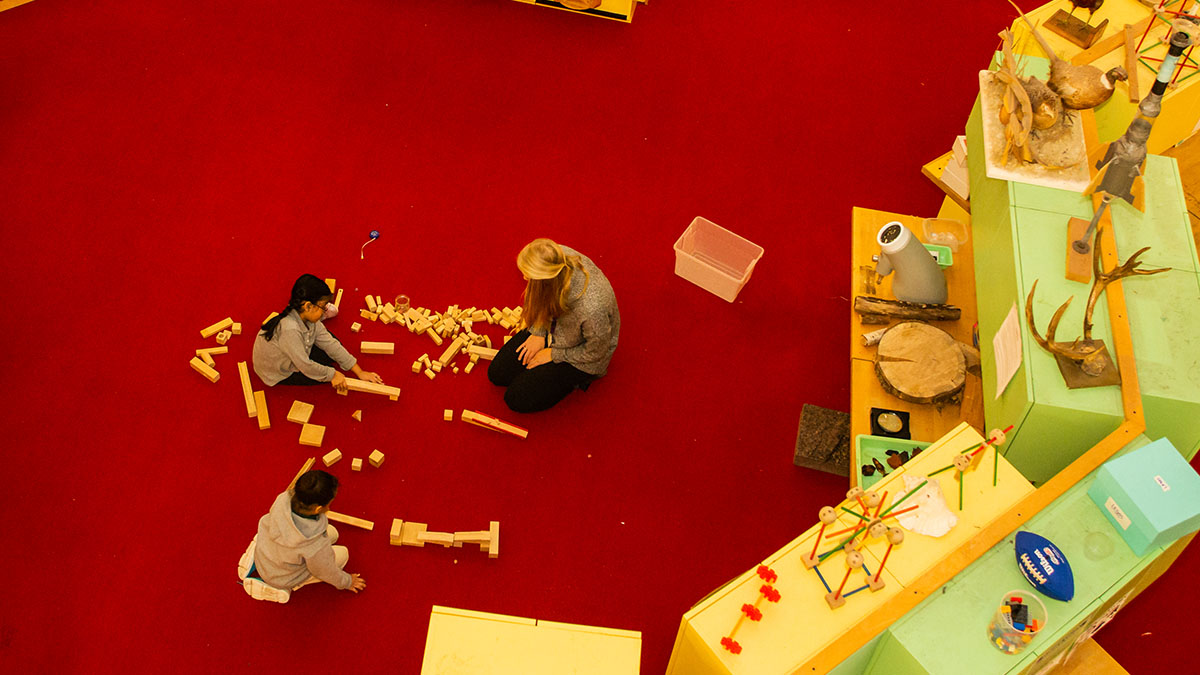 Dynamic, engaging centers help learning come alive with a sense of wonder. This stimulates imagination and curiosity in a way that builds science and engineering practices as students actively engage through the process of inquiry. Learning centers “give children the opportunity for wonder, mystery, and discovery…that speaks to young children’s inherent curiosity and innate yearning for exploration” (Heard and McDonough 2009, p. 8). To develop proficiency in the practices of science, students need to be actively engaged in the doing of science.

Crossroads Elementary School in Saint Paul, Minnesota, was designed and built physically and pedagogically with an “Inquiry Zone” located in the heart of the school. This collection of 80 learning centers provides a pathway for all students to pursue their own scientific interests. Students make weekly visits to the Inquiry Zone to interact with these learning centers. Facilitated in a collaborative effort between the classroom teacher and a STEM Fellow, students conduct their own inquiries into science and engineering. Centers are constructed with a primary focus on developing science and engineering practices. It is the acquisition of these practices that enable students to independently pursue their own interests. The STEM Fellow is a Hamline preservice teacher candidate selected for their ability to work in this unique space. The fellowship occurs in the semester immediately prior to student teaching. In this article, we describe the background and rationale of our development and use of a school-based Inquiry Zone and offer ideas and encouragement for developing similar Inquiry Zones in your elementary classroom.

Crossroad’s Inquiry Zone is a 30’ × 80’ space at the center of the school divided into small, inviting, and intimate spaces created by an array of fabric-covered walls enclosing 80 workstations. These spaces are intentionally designed to draw attention, slow activity, and encourage students to focus on the materials of their chosen center. Each center allows full engagement for students of any age and skill level. Instructions are intentionally simple and sparse, serving to facilitate an open-ended inquiry experience rather than a prescribed set of directions to follow. Sufficient materials are on hand for each student to elaborate on their investigation, yet limited to prevent students getting lost in an endless morass of possibilities. The environment is designed to support kids’ creativity in the use of objects, ideas, and processes through experimentation, construction, and play. A sense of history of previous ideas and ongoing investigations are present, inviting students to enter into dynamic living investigations of science. Students are able to add on to developing ideas, challenge ideas presented, or begin anew.

An ongoing challenge in the Inquiry Zone has been the need to be alert to ideas for new centers. The centers that work well have the ability to capture and hold interest; allow independent engagement with materials; and are built solid enough to hold up to the demands of continuing student use. We peruse museums, science education catalogs, science stores, and NSTA science activity books. We generally land on an idea smaller than what you would see at a museum but bigger than published activities. The best stations are ones that are handmade using commonly available materials. Each center has a poster inviting the student to work. It has a captivating title, an investigative focus question, directions to enter the investigation, and associated standards.

Prior to coming to the Inquiry Zone, the classroom teacher meets with her students to coordinate which center students will work with. Students arrive at the Inquiry Zone and are met by the Inquiry Zone STEM Fellow. They gather on the carpet while the Fellow reminds them of the expectations and sets the tone for the explorations ahead. Posted on the wall are the following agreements:

In the Inquiry Zone, we agree to:

The Fellow then passes out index cards with student names. Students move to their center and slide their card into an envelope posted at the center. This serves to anchor the students for the duration of their Inquiry Zone time. At each center, materials are contained in a box or organized on the table. Previous ideas and investigations from other students can remain in the center or be posted on the walls. Students build, modify, or expand on those ideas. Centers include guiding questions, standards, and vocabulary for both students and facilitators. The classroom and Inquiry Zone teachers circulate throughout the space to facilitate student experiences through asking questions, prompting deeper investigation, and probing for meaning. At closing time, a bell is rung as a signal it is time to clean up. Students return to the carpet as a whole group. They are expected to gather their thoughts in a quiet reflection time or share their findings with a partner. We may ask, “What went well in your investigation? What was challenging? What might you do next?” Students may return to the same center to continue an investigation they have begun or move on to another.

Here we share an account of one center that consistently draws strong interest as students actively engage in the practices of science and engineering.

Grade Range: K–2
Standard: DCI: PS2-A Forces and Motion: The patterns of an object’s motion in various situations can be observed and measured; when that past motion exhibits a regular pattern, future motion can be predicted from it.

Location: Stored in a large plastic tub but often carried to the floor in the center of the inquiry zone (be mindful of trip/fall hazards!).

The Marble Run center is at once familiar and inviting. The materials at the center provide sufficient explanation and brief instructions.

Marble Run: Build a track to keep the marble moving for the longest period of time

The investigative action ahead is intuitive. At its best, inquiry-based learning looks like this: A student finds something fascinating, manipulates it, and wants to know more. Students design their own tests and trials to gather new information, which leads to more wonderings.

Students waited for their names to be called and then zipped over to the tub on the counter. During one session, two students chose to work together. They carried the tub over to the open carpet space and excitedly shared their plans and wonderings: “I bet we can get it to roll all the way to the wall!” “We’ll have to make the ramp taller.” “What if we use the bigger marble?” The girls spread the pieces out on the floor and immediately started arranging the blocks and ramps to their liking. It was not long before a squeal of glee echoed around the Inquiry Zone as the first marble began its descent…down the first ramp, under the elevated bridge, then down again, through the tunnel, and out, racing across the floor until it finally came to a stop just before the far wall. “Whoa!” the girls marveled in unison. Their voices died down as they scrambled to retrieve the marble. Their direct hands-on experience of the physical forces of motion came along for the ride. I watched the girls as I circulated around the Inquiry Zone, checking in with other students, probing with a question here and connecting to scientific language there. I turned away from the girls to focus my attention on four young scientists watching the turtles swim around their habitats when I felt a tap on my arm. The marble rollers had abandoned their post and looked expectantly at me. “Can we have a measure thing, please?” asked one girl. The other nodded enthusiastically. They explained to me that they wanted to know how far their marbles went, but they wanted to keep using their favorite marble over and over again, so they could not leave it where it landed for comparison. All on their own, they discovered the need scientists have to “measure things.” I quickly fetched a meterstick and tape measure and showed them how to use each. Then, they were back to their investigations, full of curiosity, excitement, and their newly learned skill.

The open-ended nature of the Inquiry Zone lends itself to the formative assessment of student progression toward proficiency in the science and engineering practices. The criteria within the rubric (see NSTA Connection) provides insight into how and what students are thinking. Our formative assessment focus guides our interaction with each student to help them develop a targeted proficiency in science and engineering practices. Both the classroom teacher and STEM Fellow continuously circulate—observing, assessing, probing, and prompting with questions. The assessment rubric provides a guide as we seek to grow student ability to ask an investigable question, design an investigation, and construct an explanation of their results. This information provides insight for future center visits and adds to the classroom teachers’ assessment program of their students’ work in science and engineering. The aggregate data help us assess how well each center is performing along with an overall assessment of how well the Inquiry Zone itself is doing.

An Inquiry Zone can be as large as the central space we enjoy or as small as a table nestled into a corner of a classroom. Look for ways to bring the idea into your setting. Your school might have an empty classroom to set up as a fully functioning Inquiry Zone. You might transform a portion of the cafeteria for two weeks in January. Or you might plan for a dedicated Inquiry Zone space in your classroom. Collaborating with other teachers allows you to create more centers and rotate them among your classrooms. Over time, these unique spaces will make for rich learning for your students. This promotion of inquiry may help us reach the goal of establishing learning environments that “exploits the natural curiosity of children so that they maintain their motivation for learning not only during their school years, but throughout life” (Yager 2009, p. ix).

Heard G., and McDonough J.. 2009. A place for wonder: Reading and writing nonfiction in the primary grades. Portland, ME: Stenhouse Publishers.

The purpose of this assessment probe is to elicit students’ ideas about mountain formation. The probe is designed to determine whether students reco...

The purpose of this assessment probe is to elicit students’ ideas about biological adaptation. The probe is designed to find out if students think a...