Q: What’s the difference between evaporation and boiling? 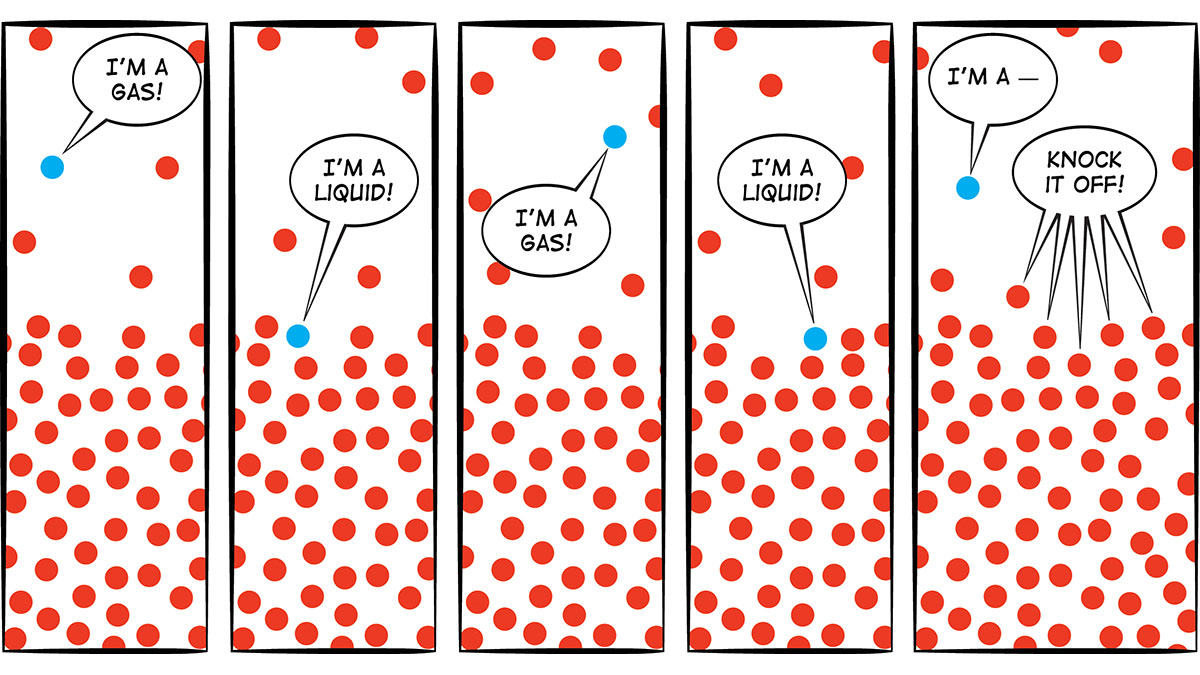 A: To complement last month’s article about condensation, we will discuss evaporation (the opposite of condensation) and the closely related phenomenon of boiling. Both evaporation and boiling involve changing a liquid to a gas, but there are a number of differences between them.

Speed: Evaporation is a slower process and boiling is faster. Try this: In the weeks leading up to a lesson on the water cycle (including evaporation and condensation), set a tall glass of water on a shelf, and have students measure the height of the water every few days and keep a table showing the changing level (Figure 1). If students don’t already know what’s going to happen, don’t tell them; let them discover it. They can also graph the height of the water over time. Then when you’re ready to talk about evaporation, ask, “What happened to the water that was in the glass? Where did it go?” (This investigation could also be done with students reading the amount of water remaining in a graduated cylinder, but you might prefer to have students practice making measurements with the ruler.) In contrast, you can boil water on a hot plate and watch the water level lower in a matter of minutes, rather than the days and weeks it takes for water to evaporate.

Bubbles: Evaporation does not involve the formation of bubbles. When liquid evaporates, individual molecules leave the liquid and become part of the air. In Figure 2, the dots represent molecules. The ones that leave the liquid and become part of the gas (air) are evaporating. The ones that go from gas to liquid are condensing. When the water in your glass was evaporating, molecules must have been moving from the water to the air more often than molecules were moving from the air to the water. So there was a net transfer of water molecules from the liquid in the glass to the air. As you can see from Figure 2, this process does not involve any bubbles. In contrast, when you boil water, the liquid is changing to a gas so rapidly that bubbles of water vapor form. Here’s a think-pair-share question for students: When you boil water and see bubbles, is there anything in the bubbles? If so, what are the bubbles made of? Some students might think those are air bubbles. But now you understand that they’re not air bubbles; they’re bubbles of water vapor—water that has changed from a liquid to a gas. Is there an easy way to demonstrate that the bubbles contain water molecules? Yes! Bring a pot of water to a rolling boil. Put a lid on it for about 20 seconds, and then remove the lid and look at the inside of it. It’s covered with drops of water from those bubbles that condensed on the cooler lid (Figure 3).

Location of the change to a gas: You’ve probably noticed that when you heat water to bring it to boiling, bubbles first form on the bottom of the pot. (Students wearing safety goggles can observe this close up.) That’s because, at first, the bottom of the pot is the only place where it’s hot enough to heat the water to the boiling point and change it to a gas. But once you have a rolling boil, the entire pot of water is at the boiling point (100°C), and bubbles form throughout the bulk of the water. Evaporation, on the other hand, occurs only at the surface of the water. (Recall Figure 2, showing the evaporating molecules leaving the surface of the water.)

Source of energy: Boiling usually requires an external source of energy, such as the burner under the pot of water in which you’re boiling your eggs. Evaporation, however, uses the energy already in the liquid. If you have a puddle of water, it has some heat energy, which usually just came from the environment. The heat in that water results in some molecules moving fast enough to escape into the air, that is, evaporate. No additional source of energy is required for evaporation, and the water does not need to reach the boiling point to evaporate. As we’ve seen, water will evaporate at room temperature. What you just read implies that evaporation, but not boiling, is a natural process. Your puddle of water or the water on your hair that you just washed will evaporate without you doing anything special. Just wait, and it dries. But boiling does not usually happen naturally. We have to deliberately heat the liquid to get it to boil.

Temperature change of the liquid: While water is boiling, its temperature remains constant at 100°C. A rolling boil doesn’t make the water any hotter than a medium boil. Your eggs will cook just as fast either way. On the other hand, evaporation of water will cool the water—and any surface that the water is evaporating off of. That’s why if you wait to dry off after you step out of the shower, you feel cold. The evaporating water molecules carry away heat from your skin. This is also why you perspire on a hot, summer day. The additional moisture on your skin results in more evaporation, which cools your skin. So don’t wipe that sweat off your brow; let it evaporate, and you’ll feel cooler!

Ask students, “What can we do to make water evaporate faster?” Here are some things that affect how fast a liquid will evaporate:

Heat. Clothes drying on a clothesline will dry faster on a summer day than in winter.

Wind. If you step out of an outdoor swimming pool when the wind is blowing, you feel colder because the wind causes the water to evaporate faster from your skin, carrying away heat energy from your skin faster, leaving your skin colder (Figure 4). This effect is also the cause of the “wind chill factor” that we hear about in weather reports on cold, winter days. You weren’t in a swimming pool, but your skin always has some moisture on it. The wind causes that moisture to evaporate faster, carrying away more heat from your skin. That’s why it’s important to stay covered up on cold, windy days.

Surface area. Increasing surface area will provide more surface from which water can evaporate. So a wet towel will dry faster if it’s spread out rather than left folded or bunched up.

To summarize, evaporation is slower, occurs only from the surface of the liquid, does not produce bubbles, and leads to cooling. Boiling is faster, can occur throughout the liquid, produces lots of bubbles, and does not result in cooling.

Between last month’s article and this one, you’re ready to discuss the water cycle. In its simplest form, the water cycle is how water changes from being water vapor (a gas) to liquid water (condensation) and then back to a gas (evaporation). Holy cow, it just hit me how many real-life applications we found for this one simple topic. There’s so much to discover in our day-to-day activities. That’s why I always say, “Never stop learning!”