Q: What are some astronomical concepts that we can teach using a globe or model of the Earth? 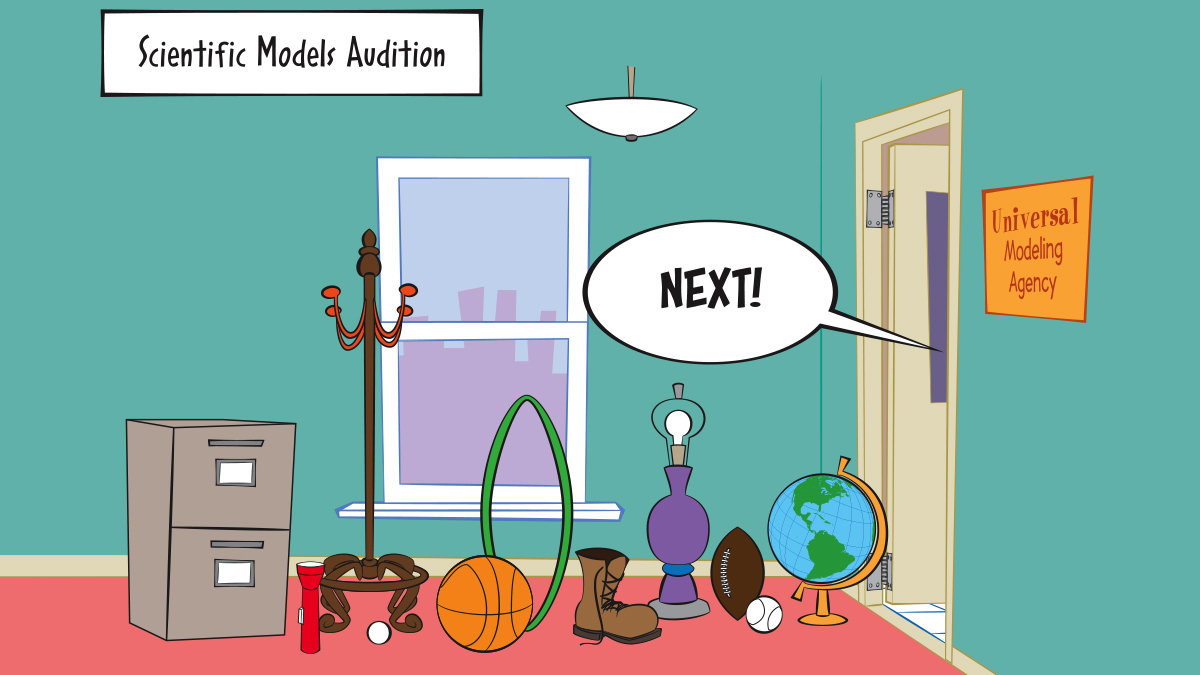 Since the theme of this issue is modeling, let’s see if we can use a model to clarify a few things. First, I’ll point out that most scientific models fall into three categories. One category is physical models (e.g., a 1/50 scale model car). A second category is mathematical or computer models (e.g., the National Weather Service computing tomorrow’s likely weather). The third category includes conceptual models (e.g., a food web diagram that shows which species are predators or prey to other species). Let’s use a physical model of the Earth. This could be a standard classroom Earth globe, or any round object (e.g., a Styrofoam ball or even a round balloon). If you have an Earth globe, it’s probably mounted at an angle, like the one shown in Figure 1a. A tilted model Styrofoam Earth can also be used (Figure 1b). The tilt angle shows that the Earth’s axis of rotation is not perpendicular to the plane of the Earth’s orbit (Figure 2), but is tilted by an angle of 23.4°. The exact number isn’t important, but that tilt is extremely important, as it gives rise to many observable phenomena, including the Sun rising higher in the sky in summer than in winter; our (northern) hemisphere receiving more radiation from the Sun and therefore getting hotter in the summer than in the winter; and the Sun appearing directly overhead only if you’re in the tropics (i.e., between latitudes 23.4° S and 23.4° N).

Six months later, when the Earth is on the other side of its orbit, and the South Pole is tipped toward the Sun, more sunlight reaches the Southern Hemisphere. At that time, more of the Sun’s rays are directed toward the Southern Hemisphere. Because the Earth has traveled halfway around its orbit when going from summer to winter, the sunlight now shines from the opposite side (recall Figure 2).

To start demonstrating this in your classroom, use a bright light source, like a slide projector or an LCD projector, to represent the Sun. Shine the light on the globe (or whatever round object you’re using) and let students see how more light shines on one hemisphere compared to the other, depending on which way the Earth is tilted. Each pair of students can be given a Styrofoam ball with a pencil through the center and— keeping the Earth’s axis tilted—demonstrate the cause for the seasons, which has nothing to do with distance from the Sun.

Let’s see how the number of hours of daylight varies depending on the time of year. With a small piece of masking tape, mark a location on the globe somewhere in the northern United States. (The closer to the poles, the greater the change in number of daylight hours from summer to winter.) Then have a student turn the globe and see for how much of one rotation that spot stays in sunlight. Try it again with a spot near the North Pole. Figure 4 shows the situation at the start of the northern summer—the summer solstice—when the North Pole is tipped toward the Sun the maximum amount. The number of hours of daylight in one day increases as you get closer to the Arctic. Within the Arctic Circle, there are 24 hours of daylight on this date; the Sun never sets! At the North Pole, the Sun is up in the sky for six months straight!

Even with 24 hours of sunshine each day, it still doesn’t get hot at the North Pole. Let’s see why. If you have a flashlight with a narrow, focused beam, have a student shine the light on the globe (or other roundish object) from the side—level with the equator. The light is concentrated in a tight circle (see Figure 5). Then ask the student to raise the flashlight so that the beam is striking the Earth closer to the North Pole. Now the light is spread out over a larger area. Therefore, there is less heating in any one area, and it doesn’t get as warm. Because the small amount of sunlight reaching the poles is spread out so much, it never gets hot there, even though there are six straight months of nonstop sunlight.

Now let’s see why if you’re in any U.S. state except Hawaii you never see the Sun directly overhead. First, what does it mean if you’re looking or pointing straight up? That direction is opposite to the center of the Earth (see Figure 6).

With the light shining on the globe, a student can hold a pencil with the eraser on the piece of tape (representing the location of the observer), with the pencil pointed straight up for that observer, as in Figure 7a. Notice that “up” for that observer is not toward your classroom ceiling; it is perpendicular to the surface of the globe, as in the figure. Ask: Is the pencil pointed toward the “Sun,” i.e., light source? (No.) So, is the Sun straight overhead for that observer? (No.) And that will be true no matter which way you rotate the globe on its axis.

Another way to tell when the pencil is pointing toward the Sun is to look at the pencil’s shadow. Anything vertical, like a person standing or a pole pointing upward will not cast a shadow if the Sun is directly overhead. But if the Sun is not overhead, you will see a shadow, and the lower the Sun in the sky, the longer the shadow. (You might have noticed that when the Sun gets close to setting, shadows get very long.) See the long shadow in Figure 7a? The Sun is not very high in the sky for that observer—nowhere close to being straight up.

Let’s move our observer farther south (Figure 7b). The upwardpointing pencil is still not pointing at the “Sun,” which is confirmed by the fact that you still see a shadow. However, the shadow is shorter this time, indicating that the Sun appears higher in the sky for this observer—but not at the zenith (the point directly overhead).

Moving farther south into the tropics, the pencil finally points at the Sun (Figure 7c), which means that the Sun appears directly overhead—at the zenith—for this observer. This is confirmed by the pencil casting no shadow.