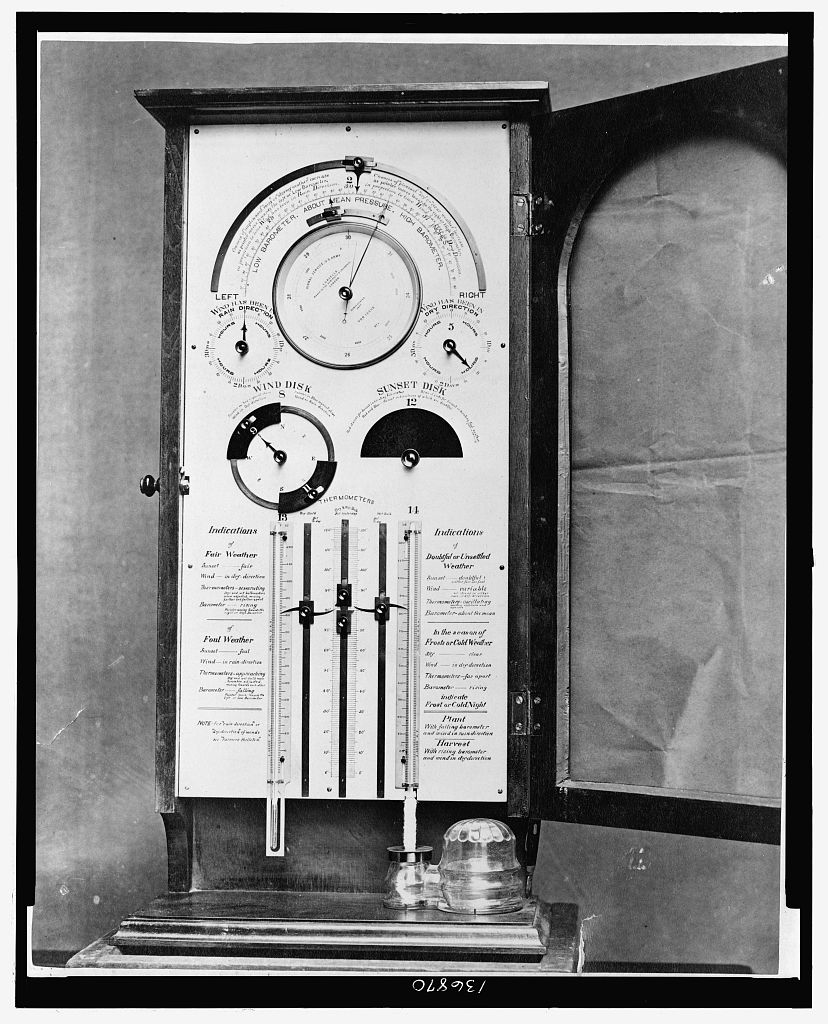 Humans across the globe have been predicting the weather for centuries, using a variety of ways to measure temperature, humidity, and other meteorological phenomena. The mid-17th century saw the invention of the barometer, used to measure air pressure, and Daniel Fahrenheit developed the first reliable scaled thermometer in the early 18th century.  Versions of both these devices, along with other instruments, can be seen in a photograph of a U.S. Army Signal Corps weather station, taken sometime between 1861 and 1880 (featured here).

The large circular dial at the top is an example of an aneroid barometer.  The first barometers used water, and later mercury, in a long, curved glass tube sealed at one end, to measure air pressure. (Small versions of these are sometimes called “storm glasses” or “weather glasses.”) The aneroid barometer uses a flexible metal cell that expands and contracts with changes in air pressure; an attached dial exaggerates the small changes in the cell, so the differences can be seen more easily. The term “compensated” in the middle of this dial indicates that the instrument had been adjusted to compensate for changes in the mechanism due to temperature.

The two tubes at the bottom of the device in the photograph are dry- and wet-bulb thermometers, used to measure temperature and humidity. The fluid in the bulb of the thermometer, probably mercury, expands and contracts with changes in the surrounding temperature, and rises in the glass tube to indicate the temperature on the Fahrenheit scale. The cloth wick on the bottom of the right-hand thermometer keeps that bulb moist with water from the attached glass reservoir, so the two temperatures can be compared to determine the humidity.

Inviting students to look closely at a high resolution version of the photograph may prompt curiosity about how the instruments worked, when they were created, and by whom.  While the manual for the item is not included,  the additional dials and instructions on the device provide some information about how to use it to predict the weather. Information about the device’s creation in the picture indicates that the barometer was made for the Signal Corps by L. Casella, a supplier of scientific instruments in London, and the thermometers by J. Green of New York.

The Signal Corps is a branch of the U.S. Army that was established in 1860, first led by General Albert James Myer, and responsible for laying and maintaining telegraph cable during the Civil War. A decade later, the Signal Corps took over the duty of monitoring the national weather, a service previously performed by the Smithsonian Institution. Myer’s weather service would eventually become the U.S. Weather Bureau.

The photograph featured here, [U.S. Signal Corp. barometer, made by L. Casella, London, England], is an albumen print in the Library of Congress Prints and Photographs division. It is part of Lot 11659, a set of photos and sketches related to the work of Albert James Myer, and is included in a collection of his papers. High-resolution versions of the image are available on its online record page at https://www.loc.gov/item/2006686276/.