right to the source

An Innovative Use of Technology . . . and Partnerships 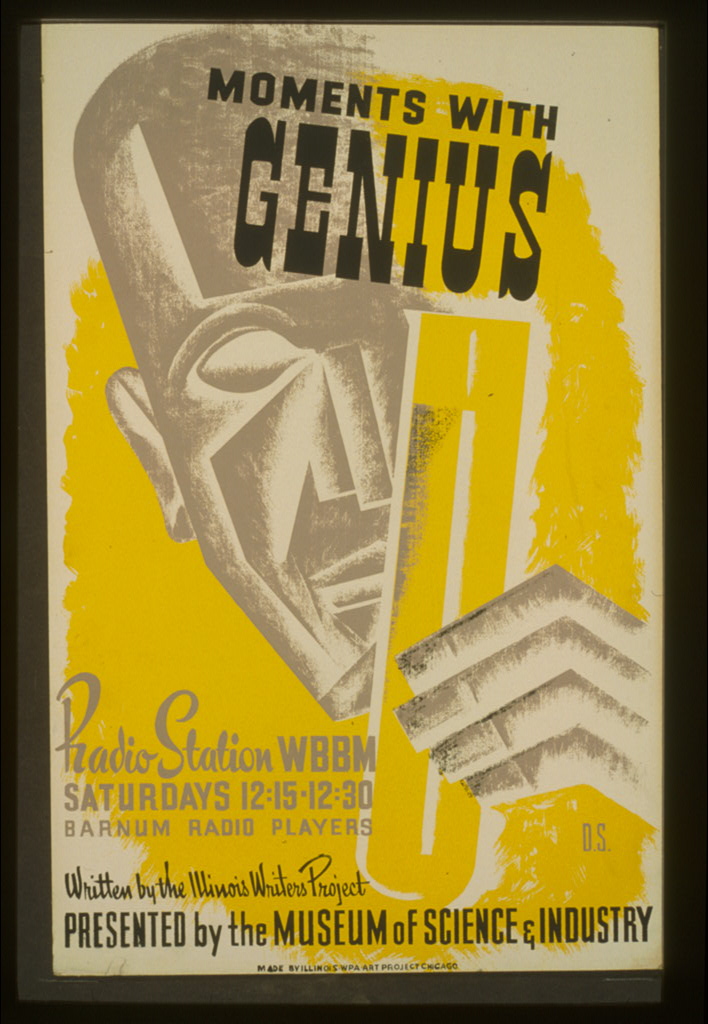 Moments with Genius, written by the Illinois Writers Project: presented by the Museum of Science & Industry;  https://www.loc.gov/item/98513494/

In the 1930s, radio was the dominant electronic broadcast medium in the United States. Home radio ownership steadily increased over the decade—from 12 million at the start, to 28 million at the close, and many new and innovative shows were developed to meet the public’s growing appetite for programming: news, mystery, drama, comedy and more! Some of this programing had educational applications and was made possible by organizational partnerships that were just as innovative as the technology.

The poster shown here was used to advertise a radio presentation called “Moments with Genius,” which aired on Chicago radio station WBBM each Saturday from 12:00 to 12:15 p.m. The stylized face of a man holding a test tube suggests that scientists and inventors may have been one aspect of the program’s content, and newspapers from the time further indicate that the program included oral dramatizations of significant scientific developments.

Examining the source closely also illustrates how diverse programs and partnerships came together to make this educational program a reality. Two partners, the Museum of Science and Industry and Radio Station WBBM, still exist in Chicago today. Meanwhile, program content was written by the Illinois Writing project, a New Deal–era federal government program that provided employment for out-of-work writers during the Great Depression. The poster itself was produced by the Works Progress Administration (WPA) Art Project, a similar federal government program for artists. Finally, a group known as the Barnum Players provided on-air talent.

As students examine the source, encourage them to reflect on how this technology-enabled partnership may have fostered a range of social, economic, and educational benefits during a time of great need, when radio was relatively new. Encourage them further to consider the extent to which this was an innovative use of technology.

The poster, “Moments with Genius, written by the Illinois Writers Project: presented by the Museum of Science & Industry,” is available free online from the Library of Congress at:  https://www.loc.gov/item/98513494/. It is a part of the Library’s Works Progress Administration (WPA) Posters Collection (https://www.loc.gov/collections/works-progress-administration-posters/), which contains 907 posters produced between 1936 and 1943. These WPA-produced posters publicized exhibits, community activities, theatrical productions, and health and educational programs in 17 states and the District of Columbia, with the strongest representation from California, Illinois, New York, Ohio, and Pennsylvania. The posters’ production also provided valuable employment to out-of-work artists as a part of Franklin Delano Roosevelt’s 1935 New Deal program. The referenced newspaper article may be found in Chronicling America (https://chroniclingamerica.loc.gov/), a historic newspaper archive sponsored by the Library of Congress and National Endowment for the Humanities, here:  https://chroniclingamerica.loc.gov/lccn/sn82015409/1940-09-01/ed-1/seq-15/.

Michael Apfeldorf (mapf@loc.gov) is an educational resources specialist at the Library of Congress.

Freebies and Opportunities for Science and STEM Teachers, December 13, 2022