I’ve found that a great way to visualize acceleration is imagining a speedometer attached to a boulder dropped from the edge of a high cliff, which I featured in the March 2019 Focus on Physics article (Figure 1). Only the force of gravity acts on the boulder and its speedometer; without air drag, it is in free fall. Dropped from rest, the initial reading is zero. One second later the reading is 9.8 m/s, which we’ll round off to 10 m/s (multiples of 10 are easier to handle). In two seconds the speedometer reads 20 m/s. In three seconds, 30 m/s, and so on. Ask your students what the change in speed is during each 1-second interval of fall. This represents another small aha! moment, for it’s easy to see a 10-m/s increase for each second of fall.

Expressed in delta notation, for every ∆t of one second the gain in speed ∆v is 10 m/s. So what’s the value of ∆v/∆t for the falling boulder? Another Aha! It’s 10 m/s per every 1 second. We can express this as 10 m/s per second, or, 10 m/s/s, which is read as 10 m/s squared, or in math notation, 10 m/s2. Again, to simplify calculations, we round free-fall acceleration that is customarily expressed as 9.8 m/s2 to 10 m/s2. During each second of free fall, the exact same pickup of speed occurs. We say the boulder and speedometer fall with constant acceleration.

You can expect that some students will be uncomfortable with the symbol for second appearing twice in m/s2—first for velocity and again for the time that velocity changes. Hence the second squared. Or, remind them of a rule of arithmetic that says when dividing a fraction by a number (m/s ÷ s), invert the number and change the division sign to a multiplication sign. Then you have m/s × 1/s = m/s2. If you still have some puzzled students, my advice (nurtured by many years of teaching) is to NOT devote more class time to it. In the spirit of “wisdom is knowing what to overlook,” tell your class that in their study of physics, for some students, all will not be fully understood, and that to keep on your scheduling quest to advance to other physics goodies, you’ll not spend time on what could better be spent in a math class. Move on! An aha! is that your course can get up to rainbows and other physics goodies before the course-time bell rings!

A follow-up to speeds of fall is assigning an odometer to the falling speedometer. Then you can treat the distances covered in free fall.

With appropriate units of a, F, and m, we can express this as the exact equation:

The acceleration is always in the direction of the net force.

The gems are found with its applications. For example, the acceleration of the falling speedometer of Figure 1 is a constant, whatever its mass. We know a feather and a rock will accelerate equally in a vacuum—when air drag is negligible, any two different-mass balls will fall with equal accelerations, g. Whatever the mass, gravitational net force mg, divided by m, equals g (Figure 2).

The equation a = F/m tells us why an automobile with a full tank of gas will accelerate less then when the tank is nearly empty. For the same applied force, greater mass means less acceleration. This physics is enormously important for rockets. Their initial mass before launch is mostly the mass of its fuel. Initial acceleration is sluggish, but with time, fuel turns to exhaust and the mass of the rocket decreases with a correspondingly increasing acceleration that puts it into orbit. A big aha! Now we know why rocket launches that seem so slow gain enormous speeds when high and out of sight. 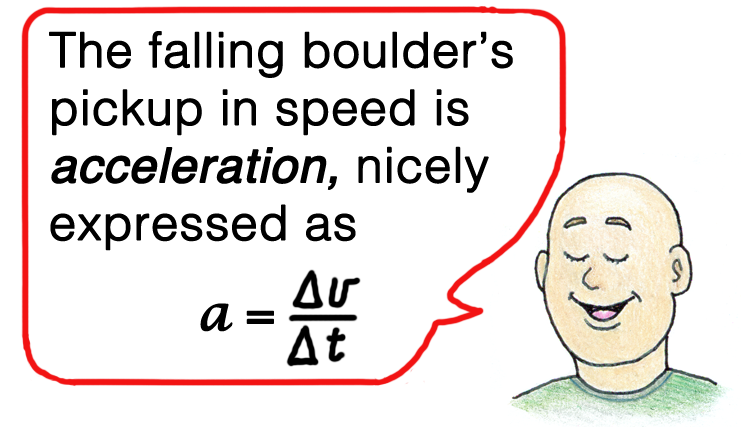 Acceleration “at the top”

If zero, then what?

In my decades of teaching, I find this question the most incorrectly answered the first time it is presented. I think most teachers and professors would agree. I’ll always remember my first exposure to this question on an exam in my undergraduate years when Professor Block wrote a large red X over my wrong answer—to my disbelief. Professor Block asked “if both acceleration and velocity are zero, then what?”—an unforgettable gem and a bright aha! moment. Follow your explanation with this punch line: Speed and velocity are not acceleration, which is the time rate at which speed or velocity undergo change. No change, no acceleration!

We began with the acceleration of the falling speedometer. Galileo told us what acceleration is, Newton told us how we get it. We learned that if the only force acting on a falling object is gravity, then whatever its mass, its acceleration is g. And we’ve learned to distinguish between the closely-related ideas of velocity and acceleration.

These topics are central ones. Most dedicated teachers will emphasize them. Some others, perhaps not. I think of my physics friend and colleague Dave Wall, also an amateur magician, who delights in pulling pennies out of children’s ears. When bystanders ask why he doesn’t tire of doing so, Dave replies that he doesn’t tire of it because each time it’s with a new kid. Similarly, we may be asked if we tire of teaching the fundamentals of physics over and over, term after term. Wouldn’t it be more interesting to teach the latest findings in physics with our classes? Or show off our latest method of solving algebraic problems? I’m with Dave Wall: Each semester we’re committed to teach physics fundamentals, and the beauty of it is that we do it each term with a new class. If we don’t teach the physics, then who will?