Simply put, a force is a push or a pull. More carefully stated, a force is part of an interaction between one thing and another thing. A simple push on a wall cannot occur unless the wall simultaneously pushes back. Forces occur in pairs. With every exertion of a force, there is a reaction to that force, equal in magnitude and opposite in direction. You can’t push against nothing.

The force of friction is one that resists movement of the surface of one object over the surface of another, or through a fluid if it’s a liquid or gas. The forces involved in collisions are nicely identified and examined by way of accompanying changes in momentum and energy. Gravitational force keeps us on Earth’s surface and our artificial satellites in orbit.

The combinations of all kinds of forces follow vector rules; when in the same direction they add, and when in opposite directions they subtract, resulting in a single net force. When a net force acts on an object, acceleration of the object occurs. These are rules of elementary physics and are incorporated into 10 questions that follow. Try them out with your students. Detailed answers follow. 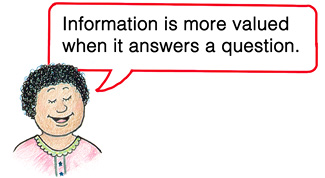 1. A friend tells you that a stick of dynamite possesses a great amount of force. Why do you agree, or disagree? 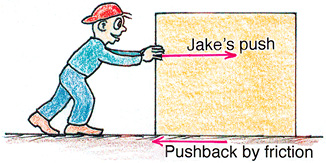 3. Drop a rock and it falls to the ground due to the force of gravity. In accord with Newton’s third law, identify the reaction force.

5. A feather and a book are held side by side, and then dropped a short distance to the floor. Which encounters the greater force of air resistance? Defend your answer.

6. A fast-flying bumblebee collides head-on with an oncoming speeding truck. Which of the two, the bee or the truck, experiences more force when colliding? Defend your answer.

7. The photo shows initially straight-lined bricks on a roadway that have become wavy due to automobile traffic. How do these bricks help to answer the question, “What specific force pushes an automobile along a roadway?” 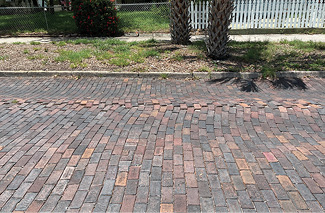 8. Which is more forceful in the sport of boxing: a punch that hits a heavyweight boxer, or the same punch hitting a lightweight boxer? Defend your answer.

9. With the same force, why is a cannonball’s speed greater when fired from a long-barrel cannon than from a short-barrel cannon? Defend your answer.

10. The Sun pulls Earth into a nearly circular orbit by gravitational force F = G(m1m2)/r2, where G is the gravitational constant, m1 and m2 are the masses of the Sun and Earth, and r is the distance between their centers. If the Sun hypothetically collapsed to become a black hole, would it pull on Earth with more force, less force, or the same force? Defend your answer. 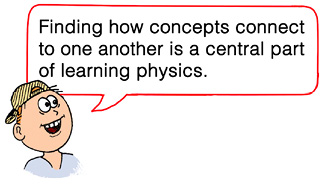 Asking simple questions like the ones above is often more revealing than asking complex questions in order to assess a person’s knowledge of physics. Even physics Nobel Prize–winners have been known to sometimes stumble on “simple questions.” See if your students can correctly answer these 10 questions. Compare their answers with the suggested answers and explanations that follow. Each question involves considerable thought, so it would make sense to spread them over more than one class session. The task of identifying forces and their applications is more than a “test”—it’s a very worthwhile learning experience.

1. Although a stick of dynamite might possess energy, momentum if moving, angular momentum if rotating, color and even smell, it does NOT possess force! Force is an action, a push or pull, and not something that can be possessed. Nothing possesses force. Your friend may be confusing force and energy, and perhaps meant to say that the stick of dynamite possesses energy, which is the ability to produce a force. Learning physics requires distinguishing between closely related ideas, in this case between possessing and producing. Very different.

3. This question is poorly phrased deliberately. Even a knowledgeable person may flub it, for a poorly worded question begets a poor answer. Consider the same question rephrased: “A dropped rock is gravitationally pulled downward by Earth. What is the reaction to this force?” Aha! According to Newton’s third law: When body A pulls on body B, body B simultaneous pulls equally and oppositely on body A. Earth acts on rock (action); rock acts on Earth (reaction). So the reaction force is Earth gravitationally pulled upward by the rock! We don’t notice this upward pull due to the huge inertia of planet Earth. Yet the dropped rock produces an infinitely tiny upward acceleration of Earth. Although we can’t detect it, it’s there in principle! The initial wording of this question may constitute a trick question. Not good!

4. When air drag isn’t a factor, the only force that acts on the ball, or any projectile, is gravitation—mg—which acts at all points along its trajectory. At the midpoint the force is mg and at the zenith it remains mg. Until some other force acts on the ball, it is under the influence of mg only. 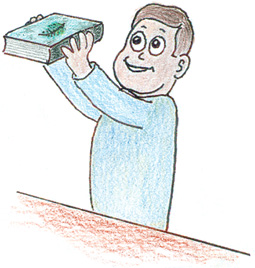 7. Apply Newton’s third law of motion to the crooked bricks in the road surface. As shown in the following sketch, the rotating tire of the car produces a backward force of friction on the road (action). The road simultaneously produces a forward friction force on the tire (reaction), which propels the car forward. The originally straight-lined bricks at the crosswalk have been pushed backward to the left when cars accelerate forward to the right. Bricks are pushed backward by the tires (action); and tires are pushed forward by the bricks (reaction). So indeed, the road pushes the car! 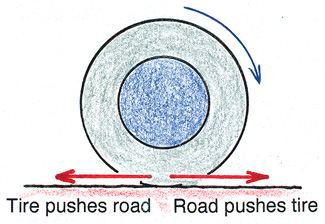 8. The punch on the heavier opponent will be more forceful, which is nicely explained by two relationships that addresses collisions: in this case the boxer’s fist colliding with an opponent. The first is the impulse-momentum relationship, F∆t = ∆(mv), and the second is the work-energy principle, ∆KE = Fd. Note that both mv and KE of the punch are greatly reduced whether colliding with a heavyweight or a lightweight boxer. Think mass and inertia. The greater mass of a heavyweight boxer means he’ll be moved less by a punch than a lighter opponent. That’s less contact time ∆t of the punch and less distance d moved by the punch, which tells us that both shortened time and distance means greater force F. So we see that a punch is more forceful when striking a more massive opponent. It’s nice to analyze a situation by more than one route.
For a simpler explanation, apply logic to Newton’s third law: a force can’t be exerted on something without that something exerting an equal and opposite force on the producer of that force. A punch on a feather, for example, is less forceful than the same punch on a more massive punching bag. That’s because the feather can’t hit back any harder than it is hit. A bit of logic then tells us that a punch is more forceful when hitting a heavy opponent than a lighter opponent. Newton had it right: How hard you hit depends on how hard what you hit hits back.

9. Knowledge of the relationships work–energy (∆KE = Fd) or impulse–momentum (F∆t = ∆mv) can provide a key to answering this question. The longer barrel of the cannon means a longer distance that the force acts on the cannonball while inside the barrel. A longer distance for the same average force means greater work done, greater energy, and a faster cannonball. Or we can consider the time the cannonball spends in the barrel. A longer barrel means a longer time for the force to act on the cannonball, and thence a greater speed. Either relationship underlies an explanation.

10. No change in force would occur between the Sun and Earth if the Sun shrank to become a black hole. The equation for gravitation says it all. No terms change, for the mass of the Sun before and after collapse would remain the same, Earth’s mass wouldn’t change, and the distance between the centers of the Sun and Earth would remain unchanged. So whatever changes are brought about by such an event, gravitational force between these two bodies would not be one of them. 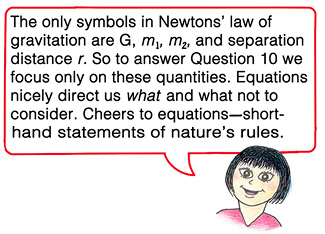 We don’t have to be reminded of Socrates to value questioning. Information is more valued when it answers a question. A teacher can pose the above questions at appropriate times and involve class participation in expressing answers. Your skill as a teacher will depend on your ability to guide students in creating clear explanations. A great feature of the teaching profession is that we get better at this as time goes by. Each school term, or each new class, gives us time to polish our explanations. Like wine and cheese, we improve with age. That’s very nice!

For more on forces, see Screencasts 3–7, and 37, 38 on www.HewittDrewIt.com. There are also are two screencasts for teachers, 148 student-oriented tutorial lessons covering a broad swath of physics, and links to related materials. See also www.ConceptualAcademy.com.