I once taught my ecology unit with a very canonical, traditional structure. But I am passionate about antiracism, and wanted to center my teaching on this practice. Now my units are based on justice-centered phenomena, ones that encourage my students to ask complicated questions about the role of science in their community.

One major application of solving “real-world” problems is examining a social/racial phenomena in ecology called environmental racism. We collectively begin the year by investigating local textile factories and their possible waste contamination and the areas where they are located. Using Google Maps, set to satellite mode, my students very quickly notice factory location to major water systems and nearby neighborhoods, which tend to have predominantly Black and Latinx populations. They also use Google maps (satellite mode) to hypothesize the various pathways improperly used or stored contaminants could take from the factories to nearby areas where people and other organisms can be affected. Google satellite mode affords students the ability to use topography to identify water runoff routes.

Students use their background knowledge from class discussions about water cycles and historical maps researched online to locate water tables in the areas. In some cases, students found that some textile companies had already been penalized for recent or past environmental contamination in that area. They initiate conversations around who has a voice, who has agency, and who can and cannot use their voices for change.

Next we study the impact of contaminants (such as chromium, arsenic, and various fertilizer components) likely to be associated with textile factories on a small hydroponic system of edible plants (like bok choy, lettuce, spinach, and radishes) and daphnia (small planktonic crustaceans). Students access databases such as Google Scholar to read peer-reviewed papers from scientific journals that explain what specific chemicals can do to biological organisms. Students use this knowledge to predict what will happen to their hydroponic systems, and use the scientific papers to develop their own calculated microscale amounts of contaminants to add to their testing hydroponic systems.

In this unit, the phenomena lead students to have complicated conversations about racism, science, and ethics. For example, one group noticed pregnant daphnia among their plants. Later, those students found that the contaminants had caused four of the daphnia to abort their offspring. They had a visceral response, asking, “If the contaminants did that to the daphnia, what are they doing to us?” Due to the nature of multiple identities at play, it is easy for the science to create opportunities for deeper discussions about intersectionality in science because as human beings, we represent many identities.

My classes then sent our lab results along with an explanatory letter to the textile factories and local politicians. The letters students wrote to politicians asked them to use their agency as a public-elected official to support the protection of communities from contamination caused by the factories. When students wrote to the factories, they asked if the owners were aware of the potential threat of contaminants to the local communities and what they are doing to ensure that contaminants don’t leave the factory site.

Often we get a response that students read with an insightful eye. Students received a letter from an ex-governor of Illinois who completely ignored students’ findings and made his response all about himself and shared perfunctory platitudes. Other government officials, such as one local senator, wrote to each student to say she had advocated for environmental racist practices under the local mandate for civil rights justice. Students also were elated to receive an official letter from an ex-mayor of Illinois who wrote to each group about the power of what they were doing and asked them to continue using science to stand against environmental injustices.

Having students use scientific knowledge to advocate for their community and to be critical readers and thinkers is a goal that science teachers aspire to—that and to instill a desire to become lifelong science learners. Currently, my classes have broadened our scope to look at national and global environmental injustices impacting other communities. Students are finding that environmental injustices always target people with less voice and agency all over the world; they see how humane treatment and care should be essential for all people in all circumstances.

I developed this unit and others on justice-centered phenomena (like DNA evidence and mass incarceration) because I want to be an antiracist in my teaching. This work is deeply personal to me. It is impactful and empowering for my students. Teachers tend to ask me, “So where do you start?” While this is a great question, the social/racial projects I teach are personal to me and my students. It’s much like DNA in that way: We have some similarities in that we (educators) have a responsibility to do this work for our communities and students, but where to start really differs from person to person.

Basing science learning on justice-centered phenomena will lead to difficult and complex conversations. If you try to avoid conversations or don’t facilitate them well, you can ultimately do more harm than good for your students and their community. To facilitate those classroom conversations well, you need a deep, personal understanding of justice.

So how do you develop that understanding? I suggest doing a little bit at a time. This work is a marathon, not a sprint. Keep reading materials (see resources below) to help you reflect on your own practices. Keep thinking about your own blind spots regarding racial justice, social justice, and intersectionality. You’ll find ways to naturally apply what you’re reading to your curriculum. 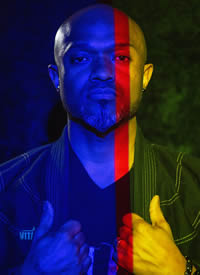 Jason Foster is a National Board Certified Instructor in the biological sciences. He teaches at Evanston Township High School in Evanston, Illinois, and is engaged in University of Illinois at Chicago's MSE Ph.D. program in Curriculum and Instruction, Racial Equity. Foster has taught biology for 15 years.

Foster is happily married and has five kids. The oldest lives in Morocco; the two other older kids live in California; and the two youngest are at home. He has also been engaged in MMA (Mixed Martial Arts) for the past 25 years.

Note: This article is featured in the May 2020 issue of Next Gen Navigator, a monthly e-newsletter from NSTA delivering information, insights, resources, and professional learning opportunities for science educators by science educators on the Next Generation Science Standards and three-dimensional instruction.  Click here to sign up to receive the Navigator every month.