You may have heard about some of the many creative ways people have been entertaining themselves while they are isolating and social distancing. Among my pandemic pod, we have been baking and cooking, reading, doing jigsaw puzzles, building gym equipment, doing home improvement, gardening, experimenting with makeup, gaming, and in my boyfriend’s case, raising fowl. Some of our pod’s hobbies are relatively simple ones that anyone can do with a little time and space. Some require a bit of property on which to work. However, raising fowl is in a different class: It requires preparation and a certain amount of expense. This post, on ducks, is the first in a series of three describing my boyfriend (henceforth known as C)’s fowl pandemic habit.

This is not C’s first experience with raising birds. He lives on more than two acres in rural Harford County, Maryland. About 10 years ago, he built a henhouse and had 12 chickens, but they were unfortunately done in by a raccoon. For several years, he has wanted to increase the number of animals on his property beyond his rotund gray cat. Thus, the year of the fowl.

Like many people, C has been working at home for the last several months. This has allowed him to pay close attention to the babies when they arrive. The 12 tiny Cayuga ducks arrived in early June in a single box from Ideal Poultry in Texas, after two days in transit. He had to collect them from the post office in person. It may surprise you to know that day-old chicks and ducklings are routinely mailed in the United States.

The ducklings were settled into a large bin with a layer of sand and mulch in the bottom. C had watched YouTube videos about raising ducklings, and had learned that because of their affinity for water, they need a special setup for the watering dish, or there would be a disastrous mess. So he bought a couple of paint trays and grates in preparation.

C also bought a chick brooder heating plate for the ducklings to warm themselves under, and a heat lamp. Duck body temperature is 107.5°F, so they need an artificial heat source for the first few weeks. Last, he bought duckling starter feed and some brewer’s yeast, for niacin. The ducklings were very small and fuzzy when they arrived.

The ducklings stayed in the bin, in C’s house, for several weeks. One duckling died, which is not uncommon, but saddened us nonetheless. When the other 11 outgrew the bin, he moved them to the new chicken coop he built this spring in preparation for the bird influx. (Yes, C is a Baltimore Orioles fan.) Ducklings and other birds can carry Salmonella on their feathers, so it’s important to wash your hands both before and after handling them (easy enough to do in a pandemic…).

This was their temporary home, as C hadn’t finished renovating the old chicken coop in a part of the yard that was fenced. The ducklings moved to their permanent home a couple of weeks ago, and have been thriving.

Close up of one of the female ducks (Photo credit: Becky Stewart)

Cayuga ducks are not pure black. They have iridescent blue-green feathers, and occasional patches of white or brown. They really love water, and in fact, they need to be immersed in it regularly to stay healthy.

Most of the ducks (Photo credit: Becky Stewart)

It’s not easy to distinguish male ducks from female ducks until breeding season. However, they do begin to make different sounds as they grow. Female ducks quack, and male ducks grunt or squeak and are generally quieter than the females. C was able to determine that he has five males and six females, and he banded them with different colors to make them easier to tell apart.

The female ducks will begin producing eggs when they are about five months old. This will be the primary purpose of the six females. Two of the males will be kept to protect them and any subsequent ducklings. Naturally, this means that three of the males will become dinner at some point, unless they find a home on another nearby farm. (If you live in Delmarva or lower Pennsylvania and want to give a drake a good home, let me know.)

What’s your pandemic hobby? Is it science-related, or pure escapism? 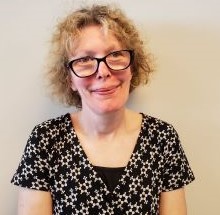 Becky Stewart is a geologist by training and a writer by avocation. She has worked for scientific and educational publishers and is currently a scientific copywriter for a laboratory informatics consulting firm. She enjoys spending time in nature, including in her own garden, which has more and less wild phases depending on the season. Additional hobbies include cooking, woodworking, and minor home improvements.