Q: What Is “Static Electricity,” and How Can I See Its Effects? 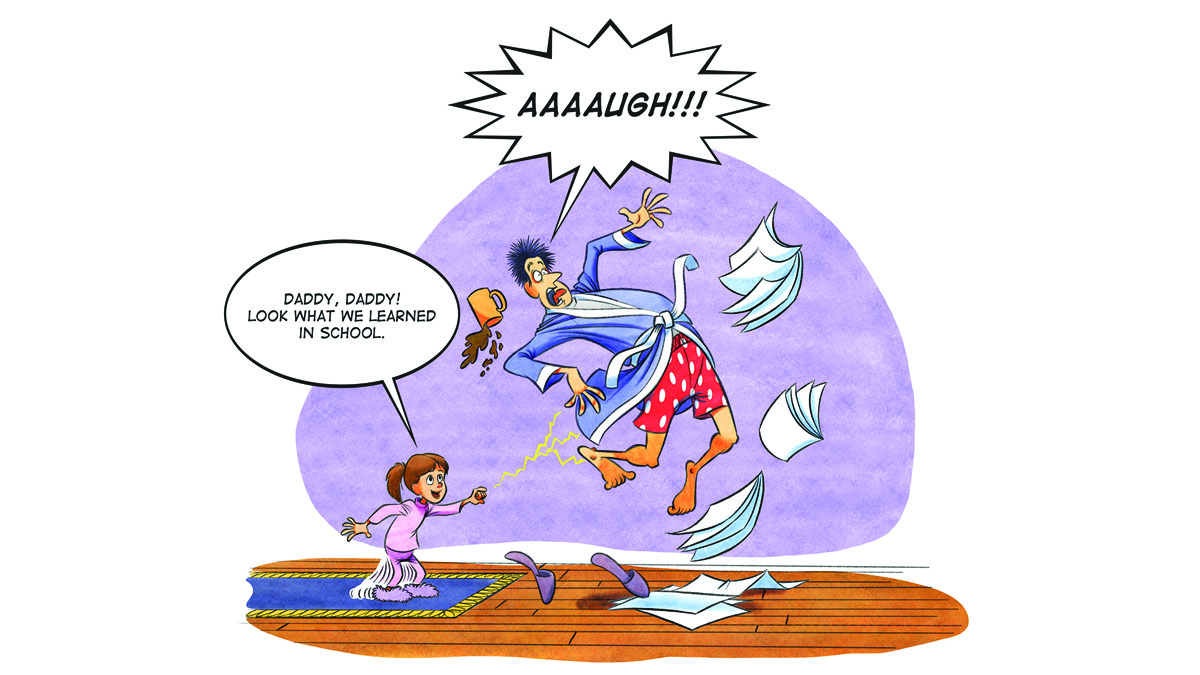 A: There are many simple ways for students to explore static electricity using simple materials. I’ll describe several fascinating activities using balloons and other items and then provide a brief tutorial about static electricity. You can do each of these investigations as a demonstration or, if your students are up to it, give each group their own materials so that they can do the investigation themselves.

One important tip regarding static electricity activities: Do them only on days when the humidity is low, say, less than 50% relative humidity. On rainy days, or days with high humidity, these activities won’t work as well and might not work at all.

Let’s give two balloons an electric charge and see how they behave. Start with two inflated balloons with strings attached to them.

As explained in the tutorial below, rubbing the balloons against hair or wool causes the balloons to become electrically charged. They have the same charge, and like charges repel, so the balloons move apart. After a while, the charged particles leak off, i.e., the excess electrons invisibly flee into the air. Then the balloons are no longer charged, and they move closer together.

Balloon and Soda Can

You can make an electrically charged “science wand” by getting a two-foot length of one-inch-wide PVC pipe. Rub the pipe against your hair for at least 20 seconds to charge it up. See what happens when you put the wand near:

You or the students will have to recharge the wand every minute or so. You can also try placing a piece of thin tinsel on the charged wand, shake it off, and, moving the wand under the tinsel, keep the tinsel levitated. There is also a gadget you can purchase that does this at the push of a button, called the Fun Fly Stick, which comes with several tinselly shapes that you can levitate due to like charges repelling one another (Figure 4, p. 66). The Fun Fly Stick is available from arborsci.com and other vendors.

When electricity flows through a wire, what’s actually moving are charged particles called electrons. There are other charged particles in atoms called protons. Electrons and protons have opposite charges, and scientists distinguish the two by labeling an electron’s charge as negative charge and a proton’s charge as positive charge. This is similar to how there are two opposite poles of a magnet. And just as opposite poles of a magnet attract each other, and like poles repel each other, opposite electric charges will attract each other, and like charges will repel each other (Figure 5). Because these attraction and repulsion properties work the same for electric charges as they do for magnetic poles (i.e., opposites attract), you might want to consider reviewing the properties of magnets before investigating static electricity.

If a charged object touches another object, especially a good conductor like metal, the charges can suddenly scoot out of the object, leaving it with no charge. Your students have probably experienced walking on a carpet (especially if they’re carelessly dragging their feet) and then getting a shock when touching a doorknob. If they walked on a wool carpet with rubber-soled shoes, electrons were transferred from the carpet to their shoes (and bodies), so they built up a negative charge (Figure 6). When touching the doorknob, the charges suddenly jumped to the metal, creating the feeling of getting shocked. Now you know why you have such an electrifying personality!

Fun fact: That little spark you get when you touch the doorknob is essentially a miniature lightning bolt. When rain clouds move through the air, they build up positive and negative electric charges (Figure 7). So clouds have static electricity too! And when enough charge builds up, electric charges jump between the cloud and the ground. That’s the spark we call lightning! Wasn’t that enlightening?