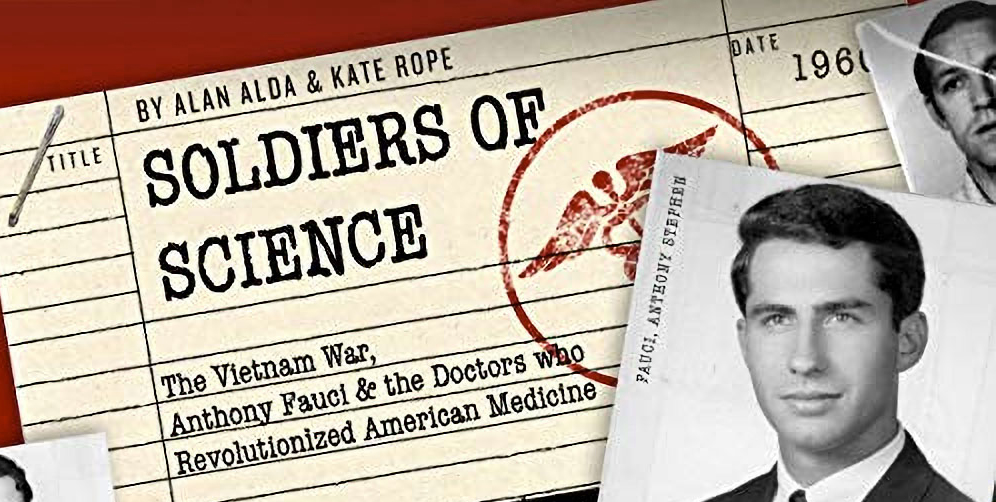 Hello science teachers and modern media users! This month’s review features Soldiers of Science, one of my all-time favorite podcasts! This might be because the narrator is the incredible Alan Alda of M.A.S.H. (I loved those reruns as a kid), The West Wing, and more recently, 30 Rock, fame. His acting abilities are on full display in this series, with the research assistance of experienced history podcaster Kate Rope. I knew I was on to something with this one when I was casually listening to it on a long road trip only to have an 11 and 15-year-old call out from the back seat with questions and begging me to play the next episode. You’ll also hear a very familiar voice, Dr. Anthony Fauci, and will be introduced to several Nobel Laureate scientists telling the story of their lives as young adults just starting in a harsh world and not knowing what they wanted to do (which is always helpful for our students to hear).

I want to say right up front that this podcast is available through Audible, the paid Amazon service. However, there are options for free trial memberships to Audible; it is worth trying to figure out ways to access Soldiers of Science because it is that good! Audible does have student memberships, and currently has a free site with children’s and young adult books and stories, so I hope they might consider adding Soldiers of Science there. (I did contact Audible about access for educational use, but they did not respond by publication time; if they update me in the future, I will let you know.) If you cannot find a way to access the entire, four-episode series through Audible, Alan Alda and Dr. Fauci team up to share the story in a single pod format on the Clear+Vivid podcast, which is available for free through Apple Podcasts (Episode: Anthony Fauci—The Soldiers of Science who saved our lives.) While this shorter version does not go into the detail of the main series, it is an excellent overview of the program and covers many of the medical and scientific breakthroughs you may want to discuss with your students.

The premise of the podcast is the untold story of the “Soldiers of Science.” History buffs may remember that all men ages 18–24 were required to enter the draft for the Vietnam War during the late 1960s. If your birthdate was drawn, off you went as an enlisted man to the South Pacific. I’ve heard the story from my dad numerous times, who, as a young college student, decided not to wait to have his birthdate called but enlisted early to enter the Air Force as an officer.

For medical students, there was no such choice; the Doctor Draft meant they all had to serve (Khot, Park, and Longstreth 2011). But these doctors were able to choose which branch they wanted to serve in; their options were: Army, Navy, Air Force, or the Public Health Service. The most coveted and competitive of these positions was the branch of the Public Health Service known as the Associate’s Program at the National Institutes of Health in Bethesda, Maryland. Because of the nature of the Doctor Draft, the desire of many of these young men not to go to Vietnam, and the competitiveness of the appointment, this process brought together the top medical students from around the country. In this unique environment, many of our most significant medical breakthroughs of the 20th century were born.

Why have so many of us never heard the story a program that led to so many medical breakthroughs? So many that, over the last 50 years, nearly 20 percent of all Nobel Prizes in medicine or physiology were awarded to alumni of this program? Dr. Fauci is the most famous of these “Yellow Berets” (a somewhat derogatory, tongue-in-cheek term many adopted for themselves), yet his relationship to this program is seldom talked about. I will let Alan Alda ultimately answer that question for you, but the truth is it’s a mix of the political process and just how modern history gets reported.

The fantastic thing is that this podcast was conceived and mostly recorded in 2019, before the current world-altering event of Covid-19, yet it is even more relevant today than perhaps it would have been without Covid-19. Alda and Rope went back to the drawing board and re-recorded some of the episodes to address this, and the result is a short, four-episode series of 30–40 minute podcasts that are interesting, revealing, and timely.

The story begins with the tale of two young children from a rural Texas town. Since Alan Alda tells it much better than I can, I won’t give away too much, but the basic story is that the children are given what amounts to a death sentence. The children have what we know today as familial hypercholesterolemia, which results in cholesterol levels in the 1000s and heart attacks typically by the age of five. The first doctor they see in their small town is not interested at all in the children, but really just their rare disease. Their persistent mother keeps trying until she finds a doctor who agrees to contact an old medical school friend, who, of course, is working as a Yellow Beret at the NIH in the 1960s.

This young doctor, Joe Goldstein, takes a great interest in both the children and their rare disease and, with his partner, Michael Brown, form one of the most essential and longest medical partnerships of the 20th century. The story of the children traveling from Texas to Maryland, their first time on a plane, navigating the DC bus system in the cold, playing on their family farm, and waiting to see what happens to them is both interesting and keeps you listening. In addition to the story of these kids, you will hear the story of other Yellow Berets and how the patients they treated at the NIH during this time inspired them to go on to discover the treatments and cures for hundreds of diseases.

Why use this podcast in your classroom? Well, not only is it interesting, but it addresses so much of the nature of science, chemistry, physiology, and biology concepts, equity, and even a little American History (so you can hit that cross-curricular stuff your admins are always looking for!). If you can only assign one of the four 30-minute podcasts, I recommend the second one as it really tells the story of the nature of science research and how this single unique program did so much not only for the patients they treated, but really all of us.

In the second podcast, one of my favorite parts is Dr. Michael Brown casually explaining the discovery of cell receptors—it’s hard to imagine a world in which scientists didn’t know about these critical molecules. His explanation not only of the discovery, but of how they work, and how they figured it out, is right up there with the best high school biology teachers I’ve encountered. His discussion could easily fit into a chemistry or biology lesson with ease.

The story of the plucky young intern (episode 3) who discovers the documentation of the Associates Program at the NIH is also very relatable for students, especially for those who don’t always connect with science in our classrooms as much as we would like. This should help them see the intersection of science with other topics. There is also a great discussion of women, minorities, economically disadvantaged, and others who were shut out of these science research opportunities, and how the white men who did get to participate saw their opportunity as an unfair advantage. In a time in which many of us are looking for entries into these conversations, and their impact on science, this is a great way to begin through a historical lens that blends politics, science, world events, and wise words from those that lived them.

While the Audible version of this podcast does not contain paid ads, the shorter Apple podcast I mention does. As always, proceed with caution. There are no official translations or transcriptions available for either podcast that I could find, but there are excellent transcription and translation apps available for education. If you speak with the special education or language learning professionals in your district or school, they will likely be able to guide you to assist any students who may need it.

Do you have questions/comments/something you love with your students you would like to see reviewed? Contact me at holly.amerman@gmail.com