Exploring Cell Biology Through a Silent Teaching Film From 1929 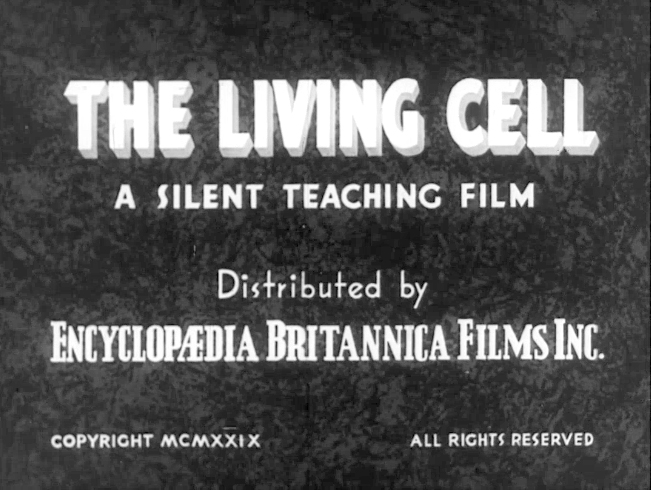 Exploring science and history with the Library of Congress

“The Living Cell: A Silent Teaching Film” is one example of this pedagogical trend. Created in 1929, this short film was produced by Eastman Teaching Films Inc., a division of the Eastman Kodak Company (founded by George Eastman, the famous inventor, patent holder, businessman, and philanthropist), in collaboration with the Department of Biology and Public Health at MIT.

This film may give your students opportunities to explore topics in the history of science and education, as well as the development of technology and media. It incorporates live-action and animated visuals, and includes segments related to cell division and internal structures, with focuses on “single-celled organisms” (e.g., an amoeba and a paramecium), “multi-celled organisms” (e.g., a hydra and a flatworm, and, apparently, mammalian tissue), and plant cell division.

Invite your students to watch the 10-minute film and discuss the topics it addresses, including the parts of the cell and cell division, as well as larger scientific concepts like the development of laboratory instruments and techniques for experimentation. Students may also consider the statement “Animals grow by cell division,” which appears late in the film, and explore how that theory was established and by whom.

“The Living Cell” is only one of the films that Eastman Teaching Films Inc. produced; indeed, the company was not the first to create such content. In fact, for years before the launch of this subsidiary, there was much public discussion related to the use and potential benefits of learning through film. A search through the Chronicling America historical newspaper database (using keywords “teaching films”), for example, yields headlines from the early 1910s that reveal some of the scope—and popularity—of films for teaching purposes. Some examples included: “Teach Children with Films” (Tacoma Times, May 6, 1912); “The Educational Moving Pictures” (Honolulu Star-Bulletin, December 23, 1912); and “Films Teach Arithmetic” (Daily Banner, January 20, 1920).

In particular, renowned inventor Thomas Edison (who was associated with George Eastman), also had a deep interest in the use of films in the classroom—and a number of early 20th-century newspapers reported this. In April 1920, for example, the Shepherdstown Register quoted Edison arguing that teaching films were more efficient learning tools. He had even suggested that they would claim the place of books in classrooms.

Reflecting today—a century later— it is interesting to consider the impact of instructional media in various forms, as well as its own evolution.

“The Living Cell: A Silent Teaching Film” (https://www.loc.gov/item/fia54000311) is available through the National Screening Room (NSR). The NSR represents a growing initiative by the Library of Congress National Audio-Visual Conservation Center to provide access to more of the Library’s audiovisual materials (including motion pictures).  You and your students can explore the collection of the NSR, which includes films related to science, technology, public health, business and industry, history, the arts, and more. Many films are also available for download. Explore at: https://www.loc.gov/collections/national-screening-room/about-this-collection/.

Also consider exploring the Chronicling America database, an extensive historical archive of over 15 million pages (as of May 2019) of American newspapers, spanning the years 1789–1963. You can search by year, state, publication, and even keyword. Your students may consider searching using terms such as “cell biology,” “mitosis,” “teaching films,” or the names of prominent figures in science. Explore at: https://chroniclingamerica.loc.gov/.

Kaleena Black (kblack@loc.gov) is an educational resources specialist at the Library of Congress.

In fall 2019, a food science instructor partnered with the design center at a large Midwestern university to create a student activity tool kit for in...

Freebies and Opportunities From the Field for Science and STEM Teachers, July 5, 2022

Book Beat Live! Time to Get Ready for the Solar Eclipse Double-Header, August 17, 2022