Supporting Students With Disabilities in STEM

Jason, is this big enough?” My seventh-grade teacher asked me about the text on the whiteboard, in front of the entire class. Much to my horror, she...

Students With Disabilities and the Next Generation Science Standards

The Next Generation Science Standards require that students engage in science and engineering practices to develop deeper understanding of the discipl...

“Science for All” is a key goal of science education. Thanks to legislation such as the Individuals with Disabilities Act and the No Child Left Behind Act, students with disabilities have access to the general education curriculum more than ever before. Science teachers now have the opportunity to unlock the scientist in every student by identifying and fostering each child’s strengths while also attending to their challenges.

This website provides strategies and resources for making science accessible for all students, including those with disabilities. By clicking on one of the links below, you can find general information, teaching strategies, and resources on working with students with disabilities in the science classroom. Good luck, and thank you for your commitment to “Science for All!”

This site was conceived of and originally developed by Dr. Edward C. Keller, Jr., and thanks to his bequest, we are able to continue refining the materials as our understanding about how to teach science to students with disabilities evolves.

Dr. Keller passionately served the needs of student with disabilities throughout his career. In the late 1960s, he noticed too few too few students with disabilities were going to college, so he began to develop different strategies to teach and encourage these students in science.

The issue was personal to Dr. Keller, because he suffered from paralysis due to a bout with polio in October 1950. Later, in college, he was told by many instructors that he could not take their class because of his mobility issues which would prohibit him from completing the fieldwork necessary in the lab component of their class. In one class he actually got some of his classmates to carry him out into the field for their lab work. His son, Edward Keller, III, states, "He believed that everyone was capable of achieving anything they put their mind to. If you want something bad enough you can get it."

With support from the the National Science Foundation (NSF), he was able to arrange summer programs in marine science for students with disabilities, ensuring that the participants were able to fully engage in high quality, accessible scientific experiences. He coordinated two other NSF grants aimed at offering equal access to science and mathematics education in the public school system.

In 1990, he coauthored an NSF report titled Science and Engineering Education for Students with Disabilities, and he provided valuable feedback to the National Academy of Sciences when it was developing the National Science Educational Standards. 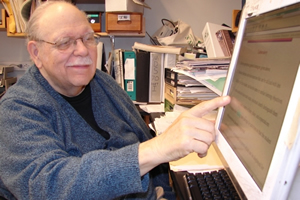 Dr. Keller was awarded the Neil S. Bucklew Social Justice Award (West Virginia University) and the 2004 Eberly College Outstanding Public Service Award. He was also inducted into the National Hall of Fame for Persons with Disabilities in Columbus, Ohio, and was an American Association for the Advancement of Science (AAAS) Fellow. In 1998, NSTA presented Keller with the Distinguished Service Award.

Dr. Keller died on March 18, 2010, in Morgantown, West Virginia, where he had been a WVU professor, who taught thousands of students and graduate students over a 40-year period, and served on many graduate committees. During that time he published over 110 research articles, abstracts, and reports, and was awarded 52 governmental grants.

Dr. Keller's tireless energy and commitment to the goal of "Science for All" impacted and inspired countless educators and students worldwide. He was a role model, mentor, and beloved friend to many science educators, and gratefully, his contributions to the field of inclusive science continue on through this website.

Postscript: Another anecdote shared by his son, Edward Keller, III:

When my father completed his rehab at Warm Springs, Georgia, he was told that he would never be able to walk without leg braces and crutches. During his college years he grew stronger and learned how to lock his left knee and support his body's weight on it. It wasn't long before he was walking with the aid of a cane for balance. During his post-doc at UNC, he would allow himself to be examined by interns at the medical center and asked for an evaluation of his condition. They would all agree that there was no hope for him ever walking again, and they went on to talk about muscle and nerve damage caused by the polio virus. At the end of the examination, the interns left the examination room and their professor and my father's friend stayed behind while my father put his pants and shoes on and walked out of the room together talking to each other. Dad said he always enjoyed the look on the interns' faces.