How Can Wildfires Lead to Mudslides? 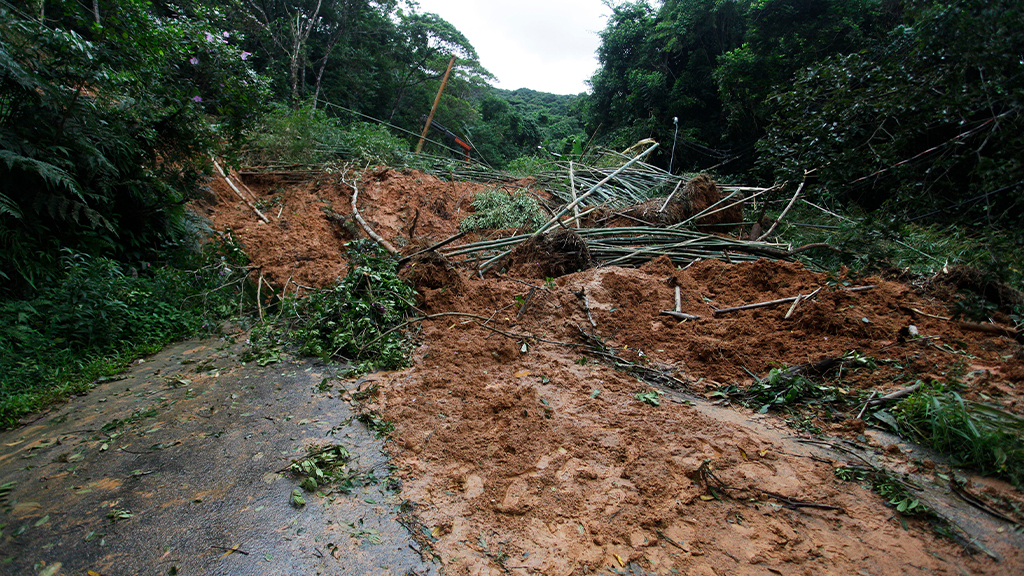 Middle school students, as scientists, investigate natural hazards to answer this driving question: How can wildfires lead to mudslides? Our Beautiful Planet: After the Flames introduces students to two phenomena: the 2017 Montecito wildfire and the 2018 Montecito mudslide. Students develop an initial model to explain what happens during a rainstorm on a mountain slope before and after a wildfire. Next, students plan and perform an investigation to test their ideas. Using evidence from the investigation and additional information from the film, students revise their model to explain how the Montecito wildfire led to a mudslide. Students use their model and information from the film to propose methods of warning communities about future mudslides.

Note that the exact amount of materials needed will vary depending on the investigation planned by students. The amounts listed below assume students do two tests with two different types of soil: regular potting soil and potting soil with a thin layer of wax within.

Tell students you want to share with them two natural hazard phenomena that had a large impact on a town in California a few years ago: a wildfire and a mudslide. Give students a few minutes to share any experiences or prior knowledge they have about wildfires or mudslides. Once a few students have shared, ask everyone to create a two-column notice-and-wonder chart in their science notebooks or on a blank sheet of paper to use to record their observations and questions as they watch the clip.

Give students a moment after you stop the film to finish their noticings and wonderings and then ask the class to share what they noticed. Record all student ideas publicly on a piece of chart paper or a board.

Once all of the noticings have been shared and posted, ask students to share some of the wonderings they recorded as they watched the film (or any new wonderings they may have after sharing noticings with the class).

Some questions students may have:

Ask students to share what they know about fire on a smaller scale (paper or plant material burning, campfires, etc.). Facilitate the discussion so that students surface the idea that ash and other substances are left behind when plants burn.

Delve a bit deeper here. You might say, “Do you think the wildfire could change the soil in Montecito in some way?” If the question about whether or not the soil has changed is not on the list of student questions yet, you should be able to add it after this discussion.

Another avenue to get more ideas and questions on the board is to ask students if they have heard about other wildfires or mudslides. This prompt could bring out more questions about whether or not these natural hazards are always connected. It may also give students a reason to look at other environmental conditions and get some questions related to those topics on the board (or ideas into their initial models).

Give students 5 minutes to create an individual model to explain what caused the mudslides. You might choose to provide students with a template (see example below) to support them in developing their model.

As students create their individual models, circulate around the room to look for those who may be struggling. If students are stuck, consider helping them make connections to the observations they recorded and the models they are creating. For example, comments such as “It looks like there are some things you noticed in the film, but I’m not seeing them on your model. How might you include some of those ideas?” with more or less specificity can help a student get started while still using their own ideas.

After the five minutes have passed, ask students to move into groups of 3 or 4 to share their models. Give each student 30 seconds to explain their model to the group. When all students have shared, ask them to record the similarities and differences among the models.

Highlight areas of disagreement among students’ models. You might say to students, “We don’t seem to agree how the changes to the mountain slope after the wildfire could cause a mudslide to occur. How might we investigate?"

Ideas students may come up with could be these:

Agree with students that they could make a model hillside to test their ideas. Introduce the materials you have to create the model.

Tell students that you have regular potting soil and a soil mixture that mimics the type of soil that scientists have found after intense wildfires (soil with a wax layer right below the surface). Allow students to handle samples of the two different soils and record their observations. Students should note that the post-wildfire soil mixture feels waxy. Inform students that the bits of wax represent the residue found in soils after a wildfire.

Facilitate a discussion to determine the investigation students would like to perform first. Say, for example, "We are investigating how changes to the mountain slope after the wildfire could cause a mudslide to occur. What seems like the most simple test to get us started? It looks like we have some questions about how the soil is different after the fire and some other questions about how the change in the soil affects the risk of a mudslide. Let’s test that first. How should we do that?"

Facilitate a discussion to get students to develop a protocol for testing the soils. The following discussion prompts can help students develop the protocol and decide what data is important to collect from these tests. Record the protocol publicly on a piece of chart paper or a board.

Give students time to create a table in their notebook to record the data. You may choose to co-construct this table on a board with the class to help students who may need more support organizing this. Start testing the soils in an area where all students are able to see the demonstration.

You may have student volunteers come to the demo area to make measurements and call out the numbers for everyone to record in their own tables.

After the tests have been conducted and students have recorded the data, ask students to make connections to the Montecito mudslide.

S= Discuss the results with a partner and how this model might be similar or different from what happened in the Montecito mudslide.

T=  If students are having difficulty making connections, consider the following prompts.

Ask students, "What new questions does this raise?" Students should wonder how a wildfire makes the soil feel waxy. Explain that you have a film that discusses some work that scientists are doing to study soils after wildfires. Play the film Our Beautiful Planet: After the Flames from start to finish.

Provide students time to revise their initial model based on evidence from the investigation and information presented in the film. Then ask students to share with a partner what they added and/or changed and what evidence they used to support these revisions to their model.

Facilitate a whole-class Consensus Discussion. Help students consider alternate explanations and develop a common explanation. You might use some or all of these questions to help facilitate the discussion:

Provide time for students to make changes to their models based on the ideas shared in the whole-class discussion.

The Mudslide Model activity was developed from a TeachEngineering lesson titled Mini-Landslide. This lesson includes more rounds of testing and could be used if time and interest allow.

Tell students that they will now use what they learned to think about future mudslides with a partner.

Facilitate an Initial Ideas Discussion. Potential Questions are these:

Amir AghaKouchak is a Professor of Civil and Environmental Engineering and Earth System Science at the University of California, Irvine. His research focuses on natural hazards and climate extremes and crosses the boundaries among hydrology, climatology, and remote sensing. One of his main research areas is studying and understanding the interactions among different types of climatic and non-climatic hazards, including compound and cascading events. He has received several honors and awards, including the American Geophysical Union’s (AGU) James B. Macelwane Medal and Fellow of AGU, and the American Society of Civil Engineers (ASCE) Huber Research Prize. AghaKouchak is currently serving as the Editor-in-Chief of Earth’s Future, a transdisciplinary scientific journal examining the state of the planet and the science of the Anthropocene. AghaKouchakr has published 200 peer-reviewed research articles in scientific journals. He has served as the principal investigator of many interdisciplinary research grants funded by the NASA, the National Science Foundation (NSF), and the National Oceanic and Atmospheric Administration (NOAA).

This lesson is based on information provided in the film Our Beautiful Planet: After the Flames. Our Beautiful Planet is a fascinating new series highlighting the work that climate scientists around the country are doing to solve some of the world’s most pressing issues. These dedicated scientists are seeking to better understand and plan for the realities of our changing climate. Using cutting-edge technology and innovative problem solving, their answers are sometimes found in rather surprising and unexpected places. The series transports the viewer to some of the most important field work being done today, taking the science out of the classroom and into the world. These compelling stories will not only teach viewers crucial scientific principles, but will also inspire them to use science to examine the issues their own communities face in this changing world and climate. Through these films, the producers hope scientists and citizens alike can come together to safeguard our environment and to protect our beautiful planet. Productions by Kikim Media. Support provided by Kennebunkport Climate Initiative.

NSTA has created a How Can Wildfires Lead to Mudslides? collection of resources to support teachers and families using this task. If you're an NSTA member, you can add this collection to your library.