Why Do Some Microwaves Cook Faster? 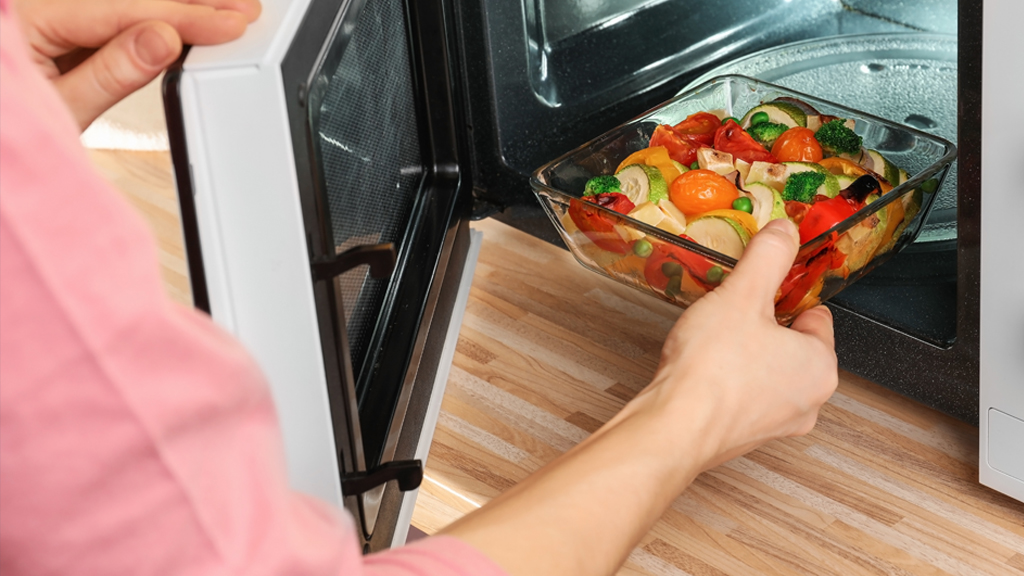 Popping popcorn or heating up other foods in a microwave oven is a common experience for most middle school students, and they may have noticed that some microwave ovens take longer than others to pop those last few kernels of popcorn. In today's task, Why Do Some Microwaves Cook Faster?, students use evidence from multiple sources (hands-on exploration, data table, and online resources) to construct an explanation of how wave properties account for different cooking times in different microwave ovens.

Next, ask students how they think microwave ovens cook food. Give students time to think independently and record ideas. Then ask students to share their ideas in a small group. As you move from group to group, you can use the following questions to probe students’ background knowledge.

Students may have many different ideas, but some students are likely to share the idea that microwave ovens somehow use waves or radiation to cook food. Students might use terms like power or energy to support their ideas. Tell students every microwave oven has a sticker on it that lists important information specific to that particular model. Share the image below, or use the specifications sticker from your microwave oven.

Tell students you have some data that might help them start to make sense of the information on this sticker. Ask students to create a t-chart and then write “Notice” on one heading and “Wonder” on the second. Tell them to record observations in the notice column and questions in the wonder column. Share the data table below. Students are likely to notice that the frequency is the same for all four ovens but that the rated output varies. They are also likely to notice the pattern that cooking time decreases as the rated output increases. Students may have questions about the value and units for frequency and output.

After students have a chance to review the data, ask them to share their observations with a partner. Next, ask students to share observations and questions publicly. Record them on a display board (projection screen, white board, dry erase board, chalkboard, etc.).

Say to students, "Many of us have questions about how the 'rated output' can be different for different ovens when the frequency stays the same. Does it make sense to answer this question first?" Students may not know the term frequency and at this point in the lesson, this is OK.

Say to students, "Let's see if we can use this rope to model waves to help us explain why the microwaves have different cook times for popcorn when the number representing frequency is the same."

Note: As an alternative to the hands-on exploration, students can use the PhET Simulation Wave on a String to explore wave properties.

Give each pair of students a length of rope (about 6 ft. in length and ¼” in diameter) and tell them they will be using the rope to model waves and look for patterns between different types of waves.

Say to students, "Use your observations of the different rope waves you modeled and the patterns you noticed to make a claim about what is DIFFERENT between the microwave ovens (explains why some microwave ovens have faster cooking time than others)." Give students independent thinking time and ask them to record their ideas. Then, ask students to share their ideas in small groups. You might use partner conversational supports to facilitate the small group discussion.

Make sure students have an opportunity to change roles.

Bring the class back together. Consider holding an building ideas discussion using prompts such as:

You might say to students, "What else do we need to find out? What might we do next?"

Obtaining Information and Constructing an Explanation

Students can use some or all of the online resources below to obtain information about waves and their characteristics and behaviors. The Physics for Kids website and UNC-TV interactive lesson go beyond the scope of this Daily Do and build a wide range of knowledge around waves. The three videos are embedded in the interactive lesson, but they could be used on their own to target more directly the science ideas addressed in this Daily Do.

You can use the following questions to probe student understanding of the online resources and to transition back to the microwave oven phenomenon.

After students have engaged with the online resources, revisit the data table and remind students that the class is trying to figure out why some microwave ovens cook foods faster than others. Students might still have questions about the units listed on the data table. Tell students that the basic unit for frequency is Hertz, or cycles per second, and the prefix mega means one million. Therefore, the frequency units used in the table represent millions of waves per second. You might ask a few students to describe what is meant by frequency in their own words and/or for students to draw two sets of waves with the same frequency. How can they tell by looking at the drawing the frequency of the two waves they've drawn are the same?

Ask students to revisit their claim about why the microwave ovens have different cook times for popping popcorn. At this point in the lesson, students should let go of the idea that the distance between the waves causes the different cook times. Students will likely move to the idea that a difference in wave height - or amplitude - can explain the different cook times for popping popcorn. You might ask students to identify scientific information from the readings/videos that supports their evidence from the microwave oven data table and rope wave investigation. Ask students to return to their small groups and share their revised explanations. Consider using the same partner conversational supports as before.

Engage students in a building consensus discussion. You might ask the following questions:

The goal of this discussion is to help students understand that the energy of the waves in different microwave ovens is proportional to the amplitude of those waves. That is, a microwave oven with a higher wattage output is generating waves with higher amplitude.

You can extend students' learning from this task by guiding them to explore other phenomena related to waves and the electromagnetic spectrum.

Sound waves at normal levels allow us to take in information from the world around us. However, very loud sounds can damage structures in our ears and lead to permanent hearing loss. Ocean waves always cause changes to coastlines, but large waves caused by storms can cause significant damage. Tsunamis, which are very large waves caused by earthquakes or volcanoes, can be devastating to coastal areas. Use what you have learned about waves to explain why large ocean waves and loud sound waves can both cause damage.

NSTA has created a Why do some microwaves cook faster? collection of resources to support teachers and families using this task. If you're an NSTA member, you can add this collection to your library by clicking ADD TO MY LIBRARY located near the top of the page (at right in the blue box).