Scope on the Skies

“Keep Looking up!” was a phrase often said by an astronomy teacher friend of mine. I would usually add, with a smile, “But not while walking!” Learning about the night sky (while standing or sitting) and “all” that it contains is a great way for parents to become engaged with their children in activities that require little or no expense other than the time spent together. Even within light-polluted populated areas, there are opportunities for viewing celestial events, albeit perhaps not as bright or as easily seen due to lights and the local horizon conditions. Learning about our night and daytime skies regardless of the local circumstances is part of the environment we live within, so it makes good sense to become more aware of these surroundings (see Figure 1). 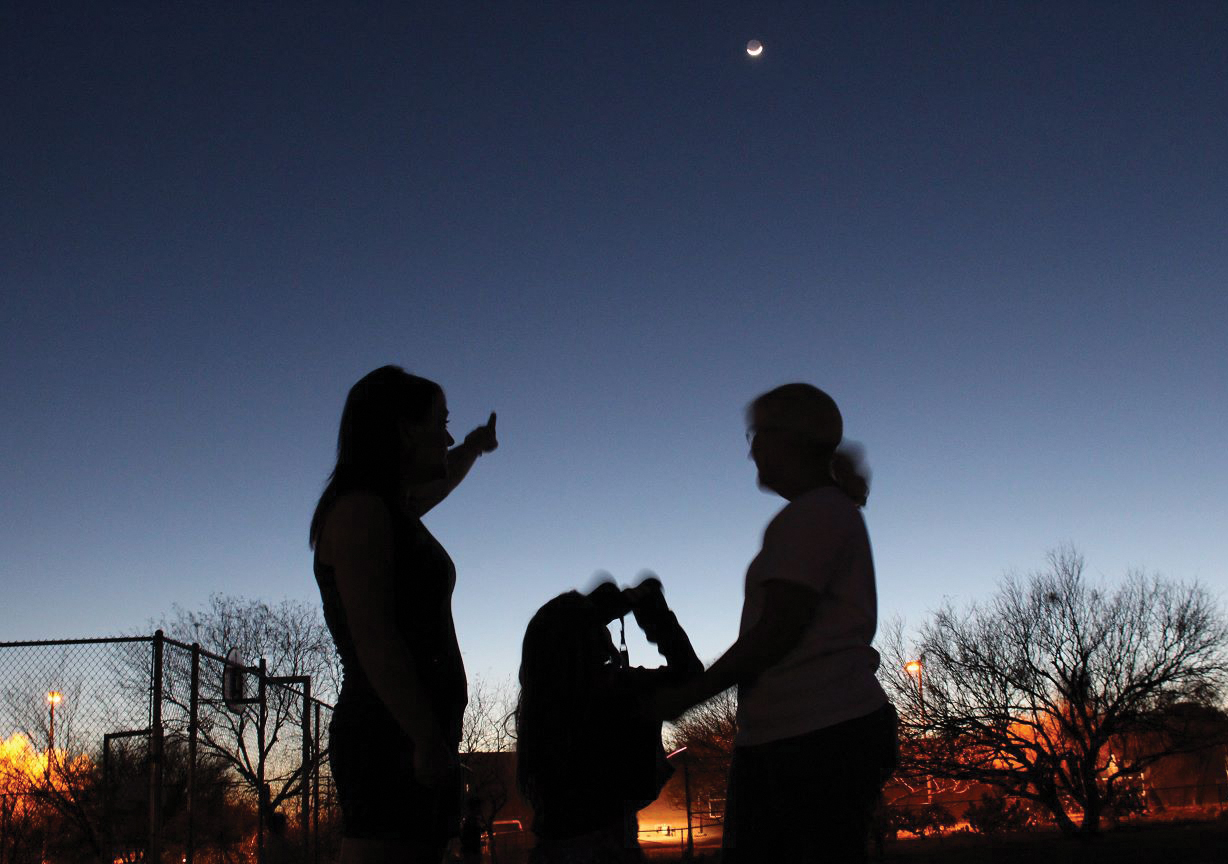 Star maps—your guide to the sky

Basic to most “astro-endeavors” is the use of a star map. This could be either old-school with a printed map or planisphere (a circular star map that may be rotated and set to a specific date and time), or with a smartphone or tablet and an astronomy app. Star maps are typically set for each month and are drawn as a circle with the center of the map as the zenith, straight overhead, while the circle represents the horizon. This type of map only shows the position of constellations and bright stars for that month and indicates different times during the month when the map and sky match. Other monthly star maps may be drawn to include the position of any visible planets or show where visible planets would be if any were in the evening skies. There are also star charts, usually in rectangular form resembling a Mercator map of the Earth, that use the celestial coordinate system of hour circles (think longitude) and degrees of declination (think latitude). Another type of paper star map is the planisphere, a circular star map containing many constellations and bright stars seen throughout the year. This map is mounted in a holder with date and time along its edge so that the circular portion may be rotated and set for a specific date and time (see Resources).

An alternative to paper-based star maps is the wide variety of PC software or apps for handheld devices like a cellphone and tablet. There is a wide range of sophistication and features among the apps with some available for no cost and others for a fee. Regardless of the handheld device, an astronomy app that is GPS enabled usually can display what is in the sky as you hold and aim your tablet or cellphone skyward. This makes it easier to identify stars, constellations, planets, and often other objects like satellites. Given the number of online resources for observing the night skies, there are any number of websites that one can turn to for information (see Resources).

This time of the year in the Northern Hemisphere, sunset is early, meaning you do not have to wait as long—for example,
after dinner—for the sky to darken enough to see the stars and constellations in our winter skies. Highlighting the winter skies is a group of easily identified stars set off by their respective bright stars and distinctive shapes. Looking southward around mid-to-late evening, the brightest nighttime star, Sirius, is easily seen above the horizon. This is the first of several bright stars making up the Winter Circle or Winter Hexagon (see Figure 2). This is an asterism, a recognizable star pattern but not a constellation, and in this example it includes a star from each of the following constellations: Sirius in Canis Major, Rigel in Orion, Aldebaran in Taurus, Capella in Auriga, Pollux in Gemini, and Procyon in Canis Minor. Other examples of an asterism are the three stars forming the Summer Triangle, or the more familiar seven stars making up the Big Dipper within Ursa Major, the Great Bear. 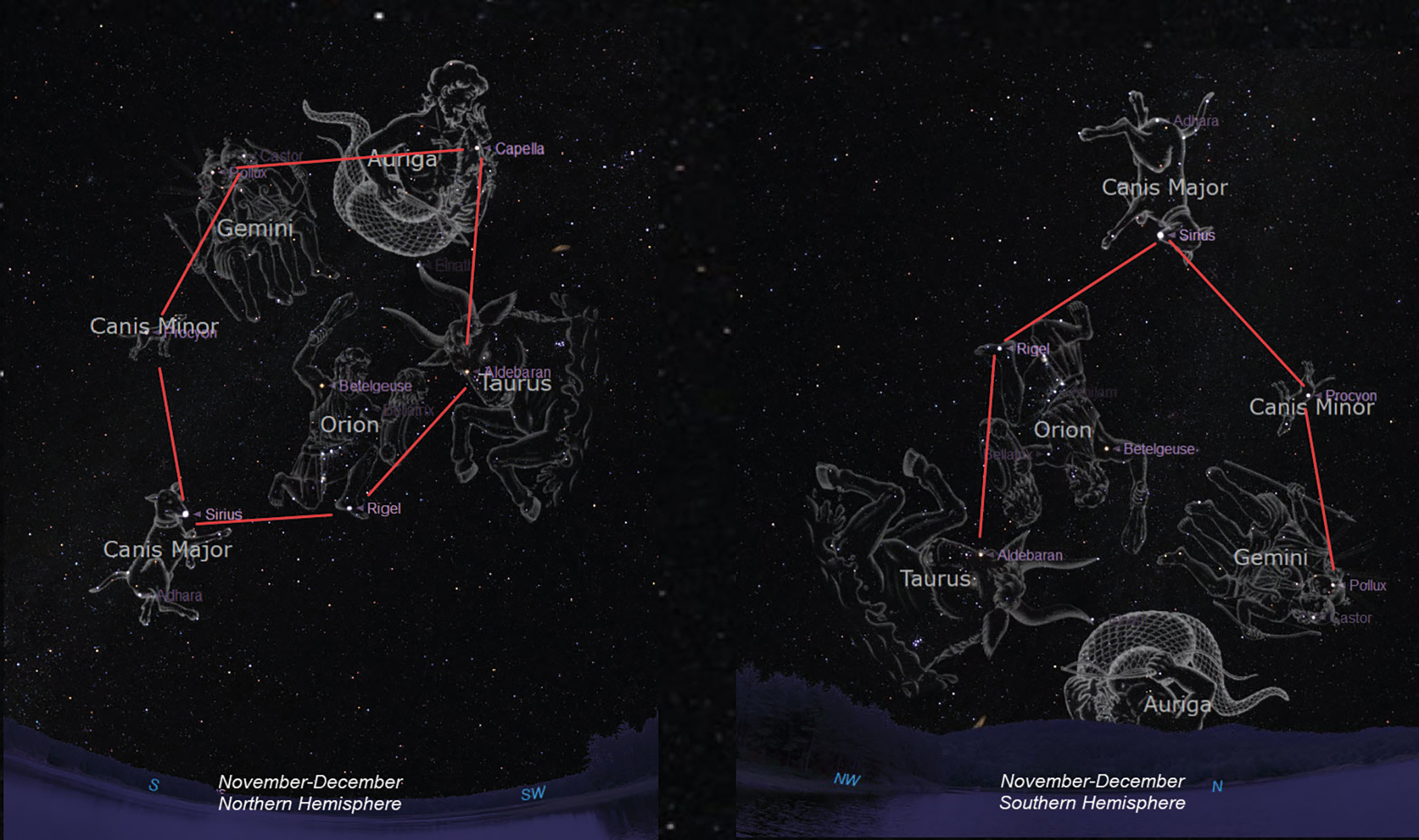 There are times each year when planets are bright and visible, and during the next two months that will be the case for planet viewing. It is interesting to note that the inner planets are on one side of the Sun while the outer planets are on the opposite side of the Sun. Early mornings will find the two inner planets, Mercury, and Venus, over the eastern horizon in the hour or so before sunrise local time. In the evening at sunset the range of outer planets stretches across the horizon from Jupiter and Saturn in the western skies, followed by Dwarf Planet Ceres, Neptune, Mars, and then Uranus bringing up the rear.

This year there is an awfully close conjunction between the planets Jupiter and Saturn that will occur during the evening of December 21st when the two planets are the closest. Watch the two planets over these two months as they approach each other. During a conjunction, the objects appear to be close physically, but the objects are just in the same direction in the sky. Lunar conjunctions with planets and some stars close to the ecliptic are relatively common; however, a conjunction between Jupiter and Saturn, called a Great Conjunction, only happens approximately every 20 years—19.86 years to be exact. The two planets follow a repeating pattern of within which constellation the conjunction happens. This year it is within Sagittarius the Archer, in 2041 it will be within Capricornus the Sea-Goat, and then in 2061–2062 the Great Conjunction will be within Aries the Ram, which is the start of the repeating pattern. 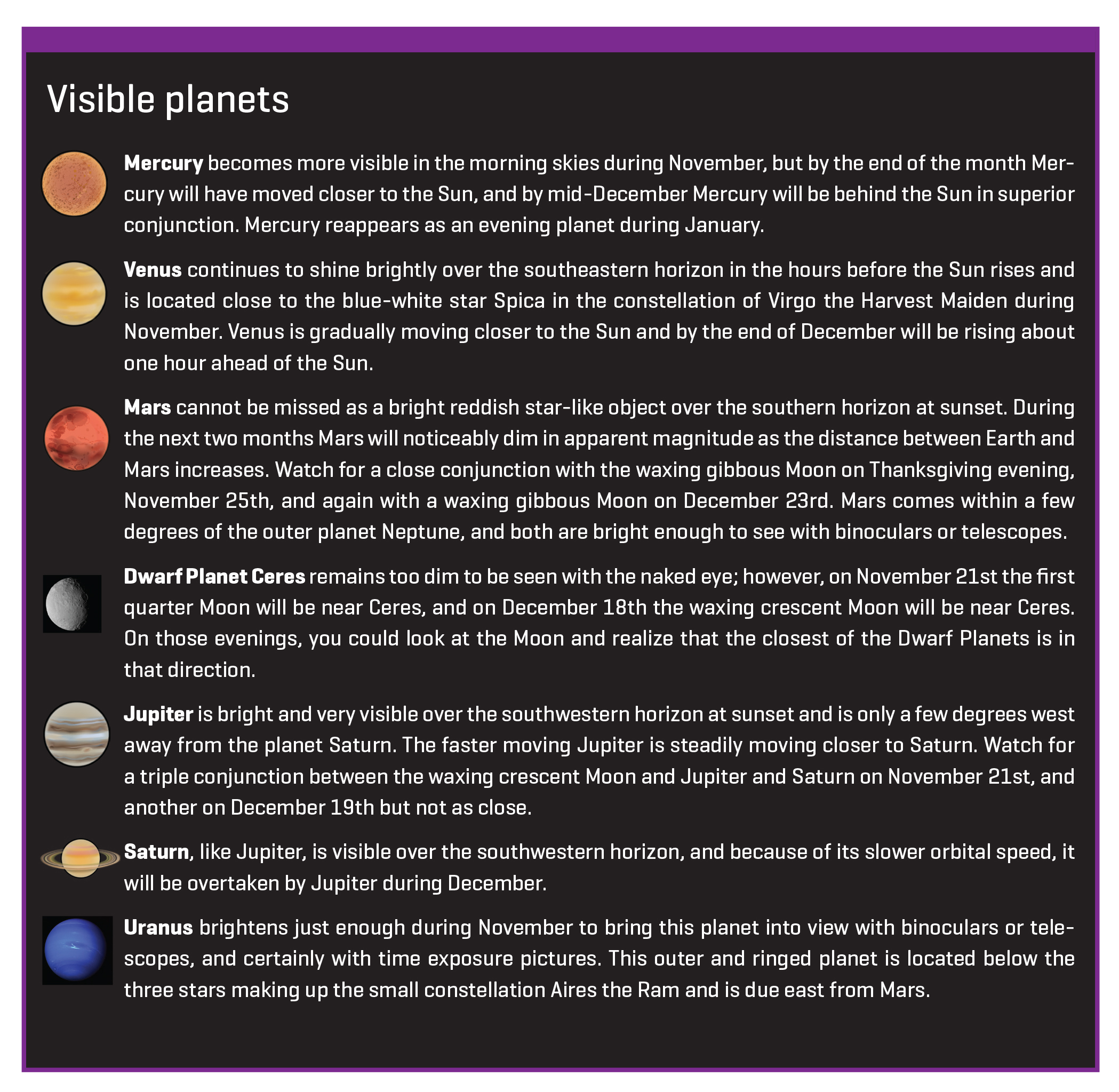 One of the easiest celestial objects to observe and follow regularly is Luna, our Moon. Most of us are familiar with the Moon when it is visible in the evenings but perhaps not so much with the Moon during the daytime hours. Starting with the first observation of the Moon, regardless of the phase, an interesting project could be based on each person involved making their own independent observations of the Moon on a once or twice daily basis or several times during the week. Do not set any specific criteria other than to note when the Moon is visible and even when it is not visible. Perhaps others may see it at a different time than you. In what direction was the Moon? What was the phase appearance (what did it look like)? Write down anything else that would add to the observation notes. After making observations for at least a couple of weeks, get together and compare observations made by each person. As notes are compared, ask what patterns if any were observed? Where was the Moon during morning hours, and what did it look like?

Taking good pictures of the night sky depends in large part on the camera and of course the weather. Most cellphones include a camera, and there are numerous camera apps available to replace or supplement the cellphone camera. Regardless of the camera, either cellphone or DSLR (digital single lens reflex camera), it will need to be on a stable platform like a tripod. Most nighttime pictures involve an exposure time that although measured in seconds, is typically too long for a camera or cellphone to be held in a stable way. Also, most cameras will have an automatic setting mode, as well as a manual or “pro” mode. From personal experience, I believe using the manual mode allows for better control over how the picture comes out. A unique advantage that digital cameras have over film-based cameras is the immediate viewing of the image or adjusting the aperture opening, exposure time, or ISO while live viewing of the object. In the “old days” I would not know how pictures looked until I got to my darkroom and developed the black and white negatives and prints (see Resources).

A digital camera by itself may take remarkable pictures of day and night scenes; however, it cannot, for example, capture the light from a distant galaxy or nebula as well as a camera “looking” through a telescope. At the Observing with NASA (OWN) website (see Resources), you can give directions to a remote telescope equipped with a camera to aim toward local “neighbors” within our solar system and the Milky Way Galaxy, as well as to make a request for a picture of distant objects like galaxies and nebulas. The OWN website has a page where the requestor enters camera settings for the object to be imaged. You will be prompted to make the appropriate settings and politely corrected to make appropriate settings for the image. You may request that pictures are taken with no filter for black and white images, and there is an option for you to request a color image; however, there is more to this than just making a request. To get a color picture, three images must be requested—one each through a red, a green, and a blue filter. Once the three images are available, they are uploaded to the OWN website for image processing and are combined into a color image. At the OWN website there are directions for requesting images and for what to do with them. The website also houses an online image processor and many activity suggestions (see Figure 3).

Figure 3. Processed image of Centaurus A (photo courtesy of author and OWN website). 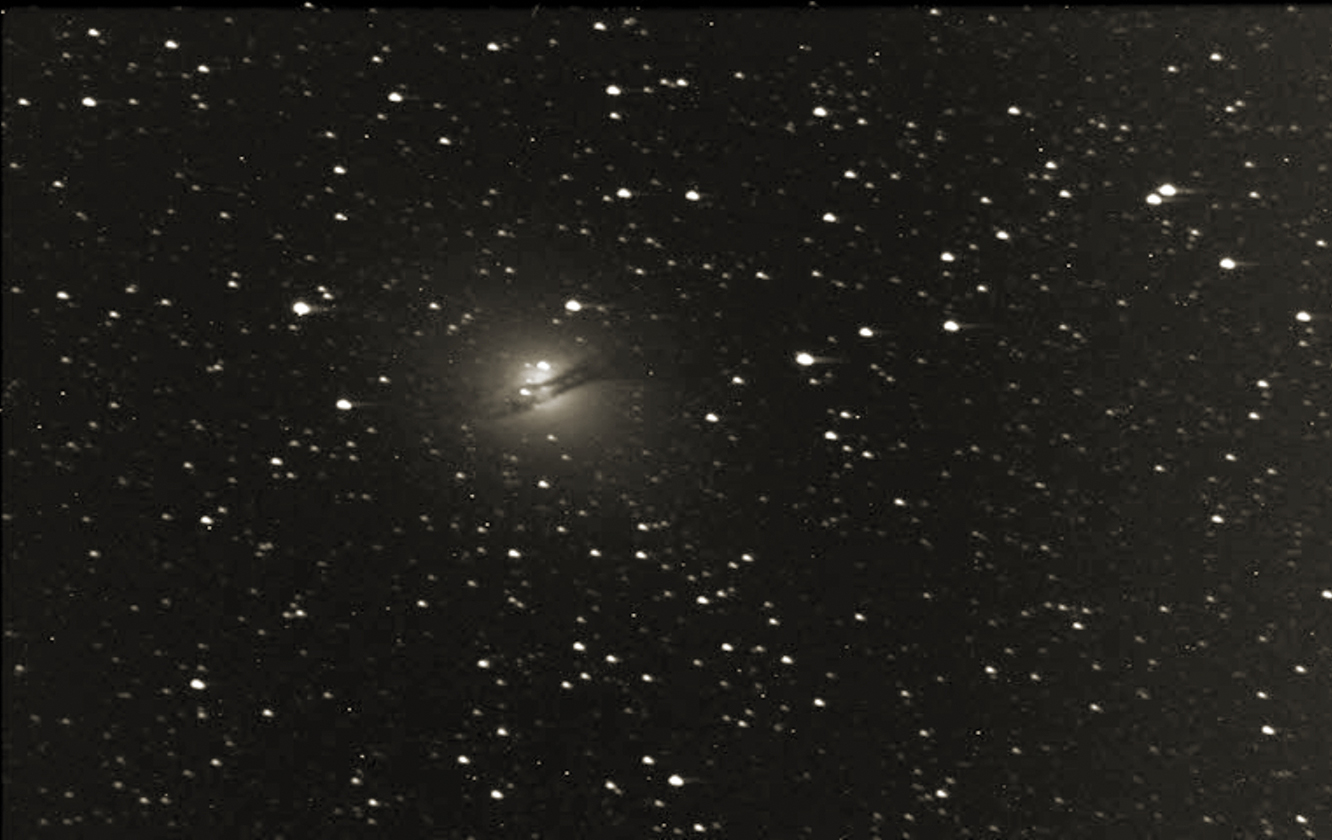 NASA Star Maps: Where are the Planets?—nightsky.jpl.nasa.gov/download-view.cfm?Doc_ID=335

NASA: Where Are the Distant Worlds Star Maps?—nightsky.jpl.nasa.gov/download-view.cfm?Doc_ID=320 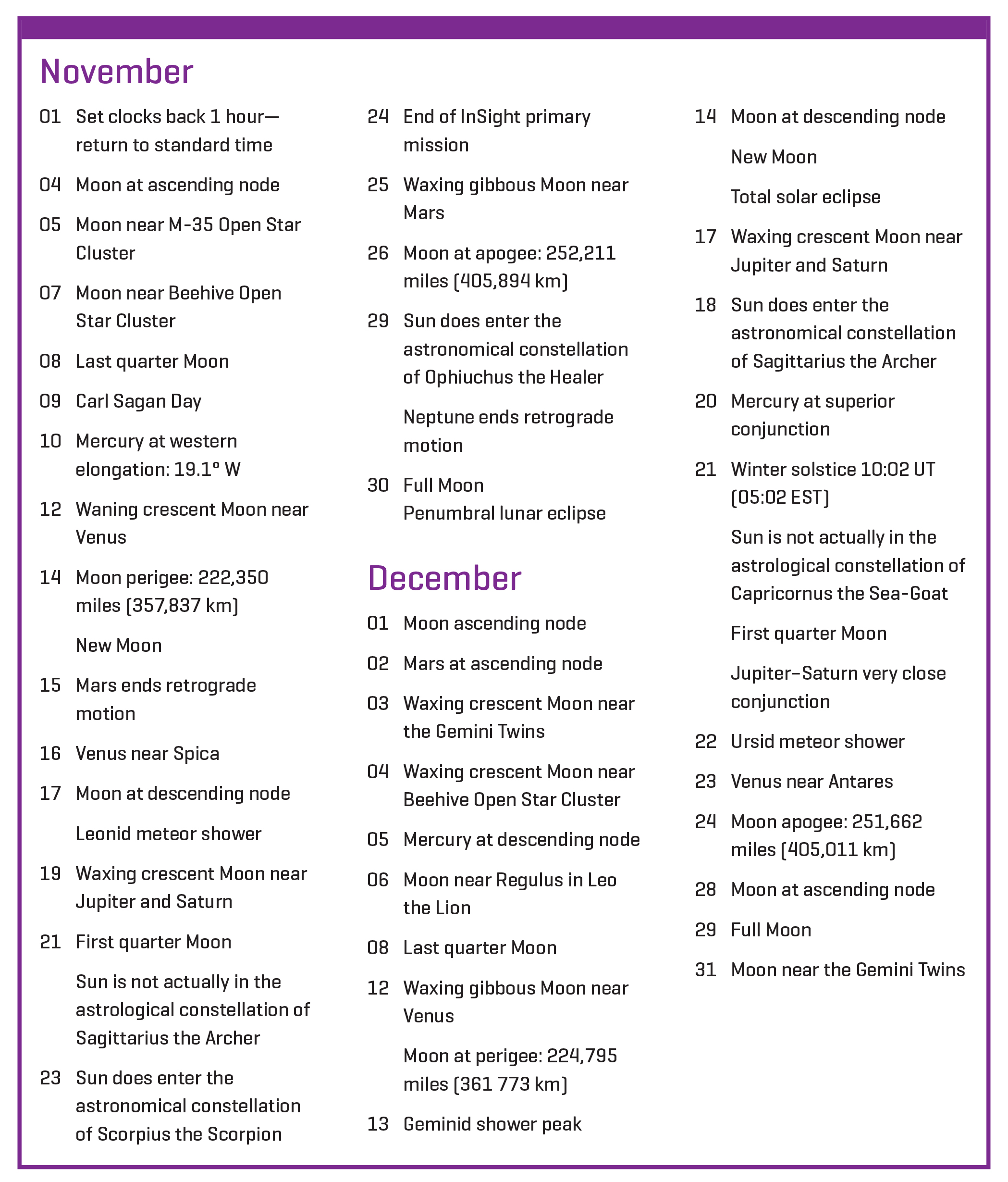