Coevolution between flowers and pollinators 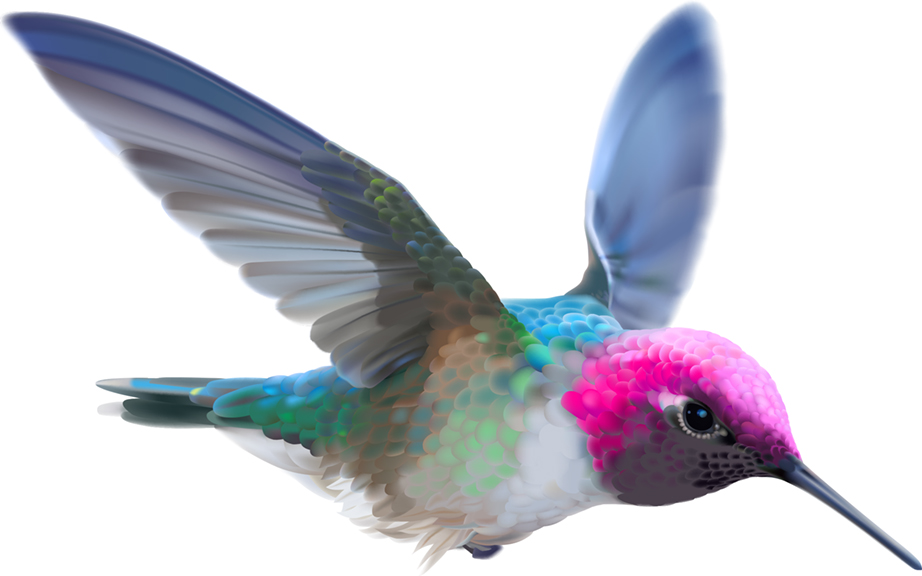 Coevolution refers to the reciprocal effect two or more species can have a on each other’s evolution. For example, long-billed and curve-billed hummingbird species prefer to feed on flowers with a matching corolla shape. Complementary bill and flower shape within these two species, also known as trait matching, results in better feeding efficiency for the hummingbirds and higher rates of pollination for the flowers (Darwin 1868; Maglianesi et al. 2014; Weinstein and Graham 2017).

Given the coevolution of plants and pollinators, one can hypothesize what might pollinate a flower based on floral morphology. Mimulus lewisii, a bee-pollinated flower, not only has a wide corolla and small amounts of nectar but also a landing platform with two yellow ridges that act as nectar guides, making it ideal for bees to find, collect pollen, and sip nectar. In contrast, Mimulus cardinalis has red flowers, a tube shaped corolla, and a large amount of nectar, making this species more suited to hummingbird species. In addition, the anthers and stigmas (the sexual components of the flower) reach out, resulting in contact with the hummingbird’s forehead and pollination of the flower (Schemske and Bradshaw 1999).

There are specific traits found in flowers that match them to specific pollinators (Pleasants and Wendel 2010). For example, flowers that open at night are pollinated by moth species. These night-bloomers use their strong, sweet fragrance rather than color to attract moths. In contrast, the presence of dark spots at the base of the petals act as nectar guides for bees (Pleasants and Wendel 2010). The types of pollinators that visit flowers are directly related to flower color. Violet flowers attract bees while flowers in the orange and red spectrum are favored by birds (Schiestl and Johnson 2013).

In our lesson, students list characteristics of flowers that attract specific pollinators, identify floral patterns that attract those pollinators, write a claim about the relationship between floral traits and pollinators, support it with scientific evidence and reasoning, and build a model of a flower demonstrating the concepts of coevolution. The various activities allow for individual work, whole-class discussion, and group work consisting of groups of two to three students, and takes approximately seven 50-minute class periods to complete.

The materials necessary for this lesson are photographs of various flowers in a variety of colors, shapes and sizes, photographs of common pollinators (hummingbirds, moths, bats, butterflies, and bees) (see “On the web”), and craft material such as chenille stems, tissue paper, felt, plates, paper towel tubes, straws, markers, glue, cotton swabs, colored water, and glitter to simulate pollen. We provide two handouts as well, a handout with graphs showing the relationship between visits by Hawkmoth pollinators and floral tube lengths and a CER worksheet (see “On the web”).

Begin with students viewing flowers and pollinators (see “On the web”). Challenge the students to work together to answer the question: Are there any matching traits between the pollinators and the flowers that would make pollination successful for the flower? (e.g., long proboscis, landing pad for a bee). Have students generate a list of matching traits and patterns (Figure 1). This would also be a good time to view flower anatomy under a stereoscope, which provides more detail and lab skills. Finally, have students construct an explanation for what might happen to the pollinator if there was a slight change in the flower (e.g., different color, or change in the length of the corolla). This activity allows students to practice constructing explanations and designing solutions, an important scientific practice in the Next Generation Science Standards.

When conducting this lesson, my 11th- and 12th-grade student responses ranged from “my flower petals are very bright in color so they would be visited by a bee” to “a rose is tightly closed so it would be visited by an ant as it would be harder for a bee to get through.” In addition to color, many students commented on the presence of nectar or the smell of the flower, which they had to infer from previous exposure to the flowers they had chosen.

Assign students a flower species and have them research the characteristics that would be attractive to pollinators. Common choices include orchids, monkey flowers, carrion flower, morning glory, bananas, figs, honeysuckle, and fuchsia. This presents an opportunity for discussions on cross-checking sources and the use of reliable sources. Students organize their research into data tables, including categories such as color, size of corolla, markings on the flower, scent, time of blooming, and geographical location of the plant.

Next, have the students hypothesize what might pollinate the flower based on its traits. Challenge them to look for studies published in scientific journals that focus on trait matching of species or coevolution of plants and pollinators in order to get the students to think about how species adapt to changes in their ecosystem. Using the handout, students make a claim about the relationship between the length of the floral tube and the visits of the Hawkmoth (see “On the web”), providing two pieces of evidence from the data and scientific reasoning to support their claims.

Engineering the “perfect” match for a pollinator

Assign students a pollinator (bee, butterfly, moth, fly, hummingbird, or bat) and ask them to construct a flower that is a perfect match. To increase the complexity of the lesson, a specific species from each category of pollinators can be selected to challenge the students to use the traits of the pollinator as a guide for engineering their flower. The students work within the engineering design process (see “On the web”), drawing a blueprint, creating a prototype, testing their prototype (by asking classmates to identify which pollinator would visit their flower), and revising their model (Figure 2).

Most students construct and present their models with a brief explanation of the traits they focused on for attracting their pollinator within two 50-minute class periods. After creating the flowers, we put the “garden” (Figure 3, p. 40) on display, and additional students were asked to take the challenge of identifying a pollinator that would visit the specific garden.

Formative assessments for this lesson include the construction of the data table on matching floral and pollinator traits and the explanation of their model of the “perfect” flower. The summative assessment is the written CER to the statement “Discuss how coevolution occurs within the world of plants and pollinators.” You can use any standard rubric for argumentative writing to assess a student’s work.

I performed this lesson with 25 high school biology students who lacked prior knowledge of the structure and purpose of the flower. Before beginning the lesson, I allocated time to dissect a flower, to help students learn the anatomy of a flower before beginning the discussion on floral traits and pollinator matching. Miniature roses worked well for this, they are inexpensive and readily available. The class was abuzz with excitement as each student raced to find all of the flower parts present and match them with their diagrams.

Student explanations of why specific pollinators visit specific flowers included the shape of the flower, color pattern and specific markings, the timing of the appearance of the blooms, and the need for a landing pad for some species. Many students constructed anthers for their flowers in addition to just petals and stems, demonstrating an understanding of the anatomy of the flower that was not present at the start of the lesson. With a newfound awareness of flower traits and the variety of pollinators, discussion of the need to protect our pollinators will continue past classroom instruction. When additional classes were asked to match the flower with the pollinator from the student “garden,” none of the flowers were correctly matched with their pollinator, supporting the need to bring the coevolutionary relationship between species and the influence they have on the survival of each other into the classroom.

Connecting to the Next Generation Science Standards

The chart below makes one set of connections between the instruction outlined in this article and the NGSS. Other valid connections are likely; however, space restrictions prevent us from listing all possibilities.

The materials, lessons, and activities outlined in the article are just one step toward reaching the performance expectation listed below.

HS-LS4-4. Construct an explanation based on evidence for how natural selection leads to adaptations of populations.

RST-11.12.1 Cite specific textual evidence to support analysis of science and technical texts, attending to important distinctions the author makes and to any gaps or inconsistencies in the account. (HS-LS4-4)

Photo gallery of flowers and pollinators

Video of the pollination process

Barrett S. 2010. Darwin’s legacy: the forms, function and sexual diversity of flowers. Philosophical Transactions of the Royal Society B 365: 351–368.

Darwin C. 1868. The variation of animals and plants under domestication. London: John Murray.