How Can We Protect Fragile Cargo? 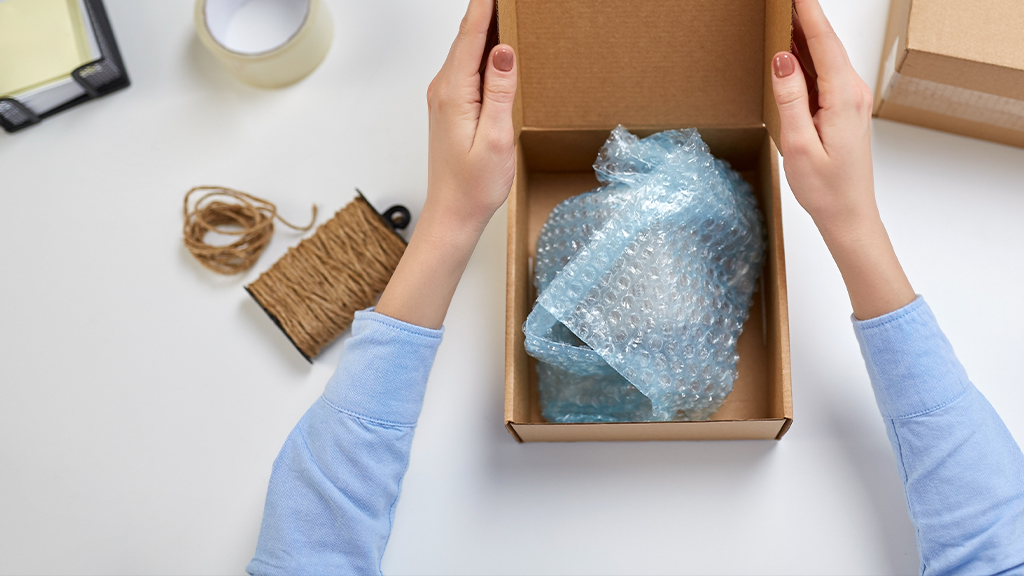 NSTA has created a How can we protect fragile cargo? collection of resources to support teachers and families using this task. If you're an NSTA member, you can add this collection to your library by clicking ADD TO MY LIBRARY, located near the top of the page (at right in the blue box).

You might have heard the expression "it's not the fall that kills you; it's the landing." But you've probably also heard stories of people surviving falls from great heights and wondered, "How is that possible?!" Well, let's find out!

In today's task, How can we protect fragile cargo?, students engage in science and engineering practices and use the thinking tools of patterns and scale, proportion, and quantity (crosscutting concepts) to make sense of Newton's second law of motion—and more specifically, the idea of impulse— to explain how fragile objects (like us humans) can survive "the landing."

How can we protect fragile cargo? builds on science ideas students develop in the Daily Do Why don't the dishes move?

How do can we protect fragile cargo? is a stand-alone task. However, it can be taught as part of an instructional sequence in which students coherently build the science idea Newton's second law accurately predicts changes in the motion of macroscopic objects. In this third and final lesson in the playlist, students build on that science idea (introduced in the second lesson) and answer the question they raised in the first lesson, "How do asteroids leave the asteroid belt?"

Tell students you want to share two short video clips of a puzzling phenomenon: people falling from great heights and safely landing. Ask students to make and record observations, as well as any questions that arise while watching the video clips.

Play the Falling Into the Net video. You might play it once or twice and ask students to just observe. Then play once or twice more while students make and record observations and any questions that arise.

Next, play the first 10 or 15 seconds of the 30+-foot-high Fall Into a Stunt Airbag video. Again, allow students to observe the clip once or twice before recording observations and questions that arise.

Ask students to create a t-chart. Tell students to independently compare their observations of the phenomenon in the two videos and record observations that are similar on one side of the chart and differences in the other. Students might notice these similarities:

Assign students to small groups. Ask students to create a group t-chart of similarities and differences and identify any patterns in their observations (data). Then ask each group to share with the class one pattern they identified. Continue calling on groups until all patterns have been shared. If more than one group noticed the same pattern, you might note that on the class record. Make a record of the patterns the class identifies. Record any questions students ask when sharing the patterns they noticed.

Ask students to use the class observations and patterns to independently create a model to explain how a person can fall from a great height and survive without injury. As you move around the room, you might ask questions such as these:

Then assign students again to small groups and ask them to compare their models; students should identify similarities and differences between their models and their group members' models.

Create a class consensus model on a large sheet of poster paper, whiteboard, etc. Begin by asking groups to share similarities between their models. As each group shares, add their thinking to the consensus model. If student groups disagree, you might ask if you can put a question mark on the model to represent what students disagree on (students might disagree on components that need to be included and how certain components interact).

You might say to students, "It seems we agree that the 'give' of the net/airbag when a person lands on it should be represented on our model, but we disagree/don't know how or why this interaction allows the person to survive the fall unharmed."

Conducting an Investigation Using a Simulation

Open the Physics Classroom's Egg Drop Interactive. Before sharing the link with students, look at the variables (egg mass, drop height, and landing surface). Using the default setting, run one trial. What data does the model (simulation) generate? Ask students, "What does change in velocity upon impact mean?" Give them an opportunity to turn and talk with a partner before sharing ideas with the class. Help the class reach consensus: Change in velocity upon impact means the change from the velocity of the egg just before it touched the landing surface to zero.

Note: Students may notice the model calculates the force using Newton's second law. They may wonder why it isn't written as F = ma. Ask students to record their questions about the formula in their science notebooks or on a sticky note and set them aside for now.

Ask students, "How is this model similar to the phenomena (trapeze artist/stunt person falling without harm) we observed? How is the model different?" Give students time to independently think and record ideas before asking them to turn and share their ideas with a partner.

Place students in groups of three and assign each student one of the three eggs to "drop." Ask students to consider how many different sets of conditions they can model using the simulation and how they might represent their data in a way that makes it easy to compare with other members in their group. Then ask students to run the simulation and collect data.

If you are completing this Daily Do in a distance-learning environment,  consider making a copy of this Google Sheets Egg Drop Simulation template for each group of students to use to collect data. This template also contains sample data from running the simulation that can be used to fill in blank data for later student analysis.

Ask students to work in the Alone Zone (independent thinking time) to identify patterns they observe in the data they collected and record the patterns in their science notebooks. Then ask students to share the patterns they identified with their group. Next, ask the groups to identify patterns they observe among their three data sets and create a list to share with the class. (You might ask the groups to post their lists in the classroom or in a digital space such as Jamboard or Google slides [one slide assigned to each group].) Ask each group to share a pattern they observed with the class. Students will likely identify these patterns:

You could move students toward the equation for Newton's second law by asking, "What can we say about the relationship between the amount of force, represented by F, and how long it takes for the velocity to change (or the egg to stop falling), represented by delta t?" Students will likely say when delta t "goes up," F "goes down." Represent this as F is proportional to 1/delta t.

Next, share the equation for Newton's second law. Then ask students, "What's another way to say acceleration?" Students might say how fast the velocity is changing. Substitute delta v/delta t for acceleration. Students will likely see the inverse relationship between F and delta t in the equation.

Ask students, "Can we use this model (equation) to represent all of the patterns we identified? Can we use it to explain why the trapeze artist/stunt person can fall from a great height without being harmed?" 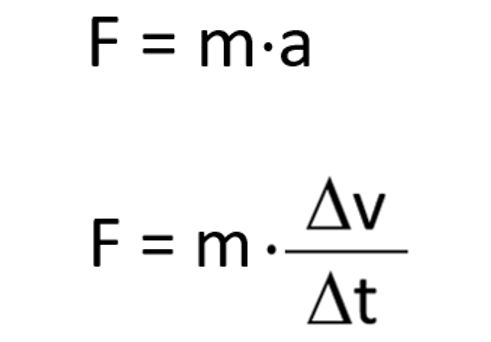 Ask students to recall what they figured out in the previous investigation with the card, cup, and penny. Students will likely say the longer the card applied a force to the penny, the further the penny traveled in the horizontal direction.

Then ask, "When you removed the card from the cup quickly so that it applied a force to the penny for a very short time, how did the penny's velocity change?" Again, ask students to share their thinking with a partner. Then invite them to share their ideas with the class. Students will likely say the penny started to move or the initial velocity was zero and then increased a little and then returned to zero. Some students may say "the velocity stayed zero" the whole time.

Rewrite the formula (model) for Newton's second law so that F and delta t are on the same side of the equation (shown at right).

Now return them to the question they are trying to answer, "How does Jupiter cause asteroids to leave the asteroid belt?"