Why Don't the Dishes Move? 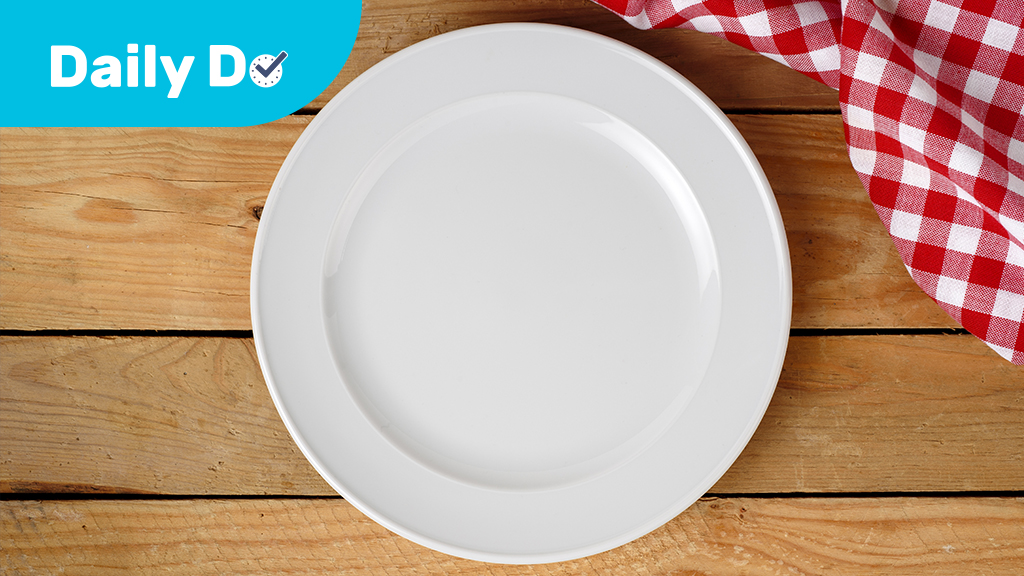 NSTA has created a Why don't the dishes move? collection of resources to support teachers and families using this task. If you're an NSTA member, you can add this collection to your library by clicking ADD TO MY LIBRARY, located near the top of the page (at right in the blue box).

Many magic tricks are applications of science ideas performed with a flourish! The tablecloth trick is no exception. But how does the trick work? In today's task, Why don't the dishes move?, students engage in science and engineering ideas and use the thinking tool of cause-and-effect (crosscutting concepts) to make sense of science ideas about forces. Students use these ideas about forces to explain how the tablecloth and similar magic tricks work.

If you and your students love magic tricks and illusions, don't worry! The explanation of the tablecloth trick phenomenon won't diminish the trick's ability to impress and amaze.

How do asteroids cross Earth's path? is a stand-alone task. However, it can be taught as part of an instructional sequence in which students coherently build the science idea Newton's second law accurately predicts changes in the motion of macroscopic objects. In this second of three playlist lessons, students begin to make sense of that science idea in the pursuit of the answer to their question, "How do asteroids leave the asteroid belt?"

Tell students you saw a surprising phenomenon—a magic trick(!)—that you want to share. Ask students to create a t-chart in their science notebook or on a sheet of paper and label one side notice and the other side wonder.

Play Mat Ricardo's Tablecloth Trick video until you can see a clear image of the two tables like the one at left. Stop the video and ask students to individually record their observations and any questions that arise in their t-chart. 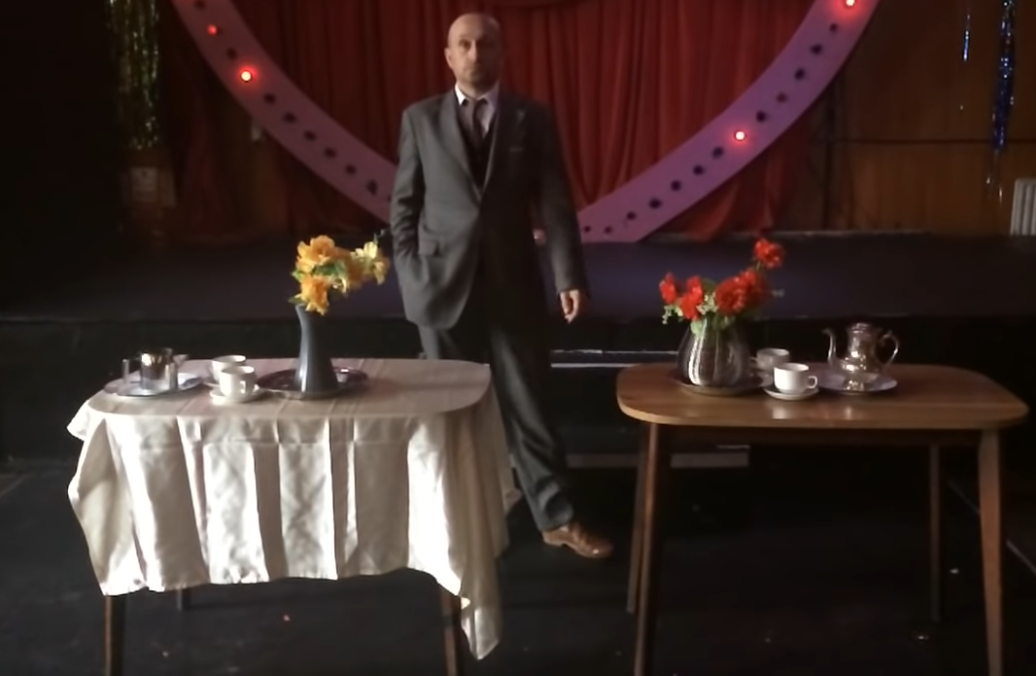 Play the video two or three times while students continue to individually make and record observations. Consider playing the video at half speed (Settings > Playback speed > 0.5) a few times as well. You might also share side-by-side images of the two tables before and after the trick so students can make direct comparisons and record additional observations and/or questions. 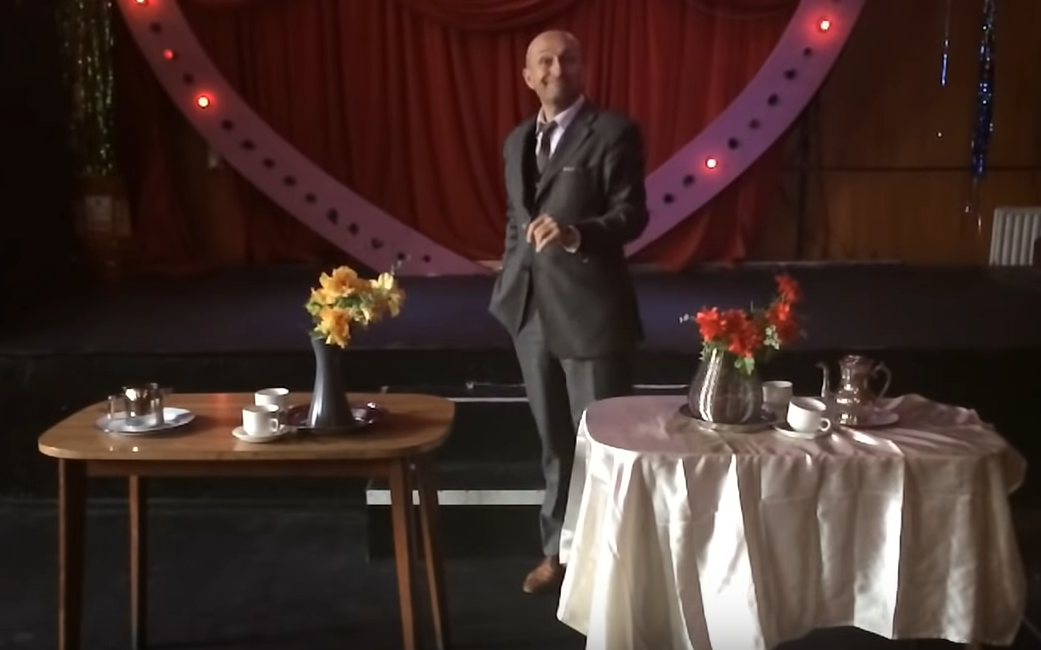 Next, ask students to move into small groups (3 or 4 students) and share their observations. You might use a talking stick protocol (see the Why are plane designs so different? Daily Do) to help ensure each student has an opportunity to share. If you are teaching and learning in a distance-learning environment, consider making a copy and using the Jamboard Notice and Wonder template as a way for students to share their ideas.

Create a class notice-and-wonder t-chart. Ask each group to share two observations that most of the group noticed and one observation that maybe only one student noticed that was an "ooh, I didn't notice that" for everyone else. If a group also shares a question(s), make sure to record their question(s) on the t-chart. Observations and student questions may include these:

Say to students, "Many of us are wondering why the objects on the table stayed on the table. Does it make sense to investigate this question first?"

Coin in the Cup Investigation

Materials (per pair of students)

Practice the "Coin in the Cup" trick before performing the trick for your students. Place the card on top of the glass, then center the penny on the card. Quickly flick the card with your forefinger in the horizontal direction (see setup at right). 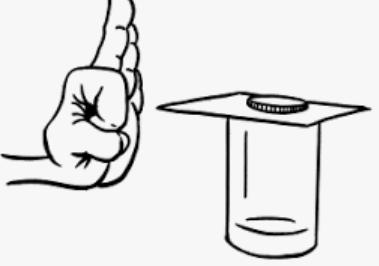 Say to students, "I've seen a phenomenon related to the tablecloth trick that doesn't involve breakable dishes! Let me show you."

Perform the "Coin in the Cup" trick for your students. You might repeat the trick a few times. Ask students, "Do you think we can explain the trick using our knowledge about forces?" Project the first page of the student handout (or redraw on a poster, whiteboard, etc.). Do not distribute to students at this time.

Tell students, "At the start of the trick, what are the forces acting on the penny?" Ask students to turn and talk with a partner first before asking students to share with the whole class. Students will likely say gravity is pulling downward and the card is pushing upward.

Draw an arrow representing the gravity on the top cup. Ask students, "How should I represent the force the card is exerting on the penny? (an arrow of the same size pointing in the opposite direction) Why should the arrow be the same size? (The forces are balanced; there is no net force on the penny; the penny isn't moving.)"

Note: You might choose to label the downward arrow weight and the upward arrow normal force, but students can explain how the trick works without this specialized language.

Draw an arrow representing gravity on the middle cup. Then ask, "At this moment in the trick, what is the motion of the penny?" Students will likely say the penny is moving downward.

You might ask the students to say what forces are acting on the penny at the end of the trick and draw them on the bottom cup (End Position). 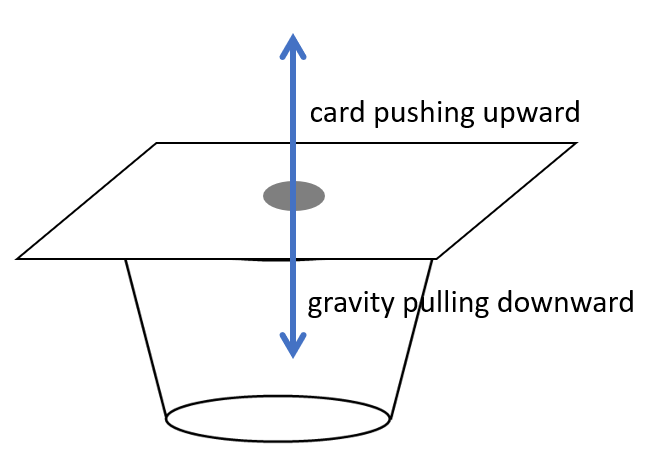 Refer students to the class list of observations, and ask, "Does our explanation of the "Coin in the Cup" trick account for all of our observations?" Use the list to remind students that everything on the tables moved from their starting positions (even though they didn't fall off the table).

Say to students, "Let's see if we can use the materials from the "Coin in the Cup" trick to figure out why the table settings moved but didn't fall off the table."

Give every student a copy of the student handout and distribute materials to pairs of students. Challenge students to alter the trick to achieve each of the three additional desired penny outcomes. Make sure students individually record how they achieved each outcome.

As you move around the room, use questions to keep students thinking about the forces acting on the penny. Some questions you might ask include

Give students time to achieve the desired penny outcomes, but don't worry if not all students achieve all three. Collect all of the materials.

Project the following questions (or write on a poster, whiteboard, etc.) and ask students to answer them in the Alone Zone (independent thinking time).

Assign students to groups, and ask them to share their answers to the above questions with the group. Listen for students to share ideas about the amount of time the card applied a force to the penny and the penny's change in motion.

The class will likely reach consensus on the longer the card applies a force to the penny, the further the penny will move in the horizontal direction. Consider sharing the Real Physics of the Tablecloth Trick with students after the class has reached consensus.

Direct students to the class list of observations and questions, and ask, "Which questions have we answered? Which question should we investigate next?" Consider performing the tablecloth trick once the class has figured out the answers to all of the questions!

Ask students, "How does the knowledge that the longer the card applies a force to the penny, the further the penny will move in the horizontal direction help us explain how Jupiter causes asteroids to leave the asteroid belt?" You might give students time in the Alone Zone (independent thinking time) and ask them to return to their initial model and add to and/or change the part of their model that explains how asteroids leave the asteroid belt (for example, many students may not have included Jupiter as a component and/or interactions between Jupiter and asteroids). Next, ask students to share their revised model with a partner and tell what evidence the addition(s) and/or change(s) is based on. Do not ask students to share their revised models with the class at this time; make sure to tell students you will return to their models later.

To navigate students to the next lesson, you might say, "We figured out the longer the card applies a force to the penny, the further the penny will move in the horizontal direction. Can we reliably use this same pattern to explain the effect Jupiter has on asteroids in the asteroid belt? Should we investigate this next?"