How Do Asteroids Cross Earth's Path? 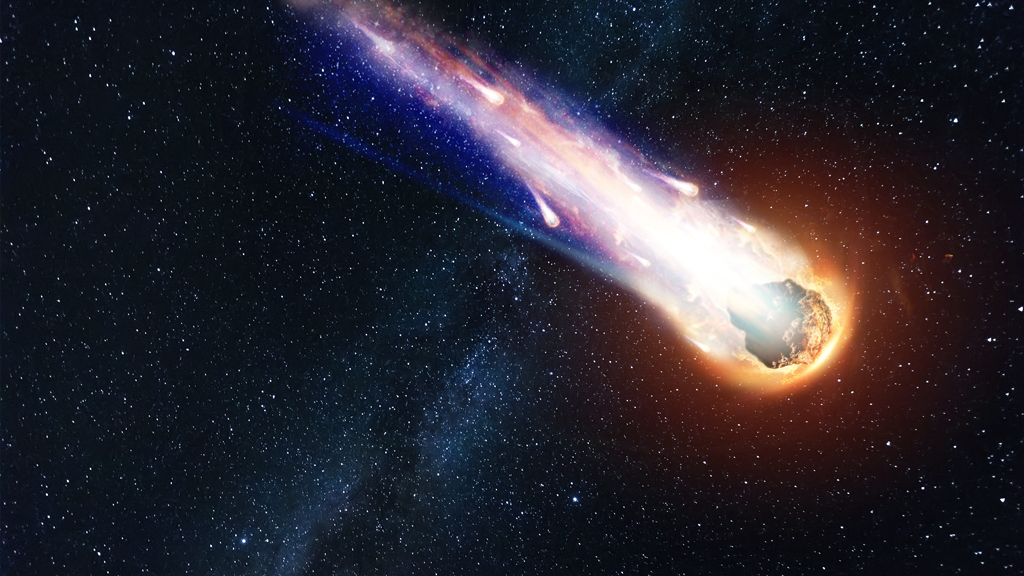 NSTA has created a How do asteroids cross Earth's path? collection of resources to support teachers and families using this task. If you're an NSTA member, you can add this collection to your library by clicking ADD TO MY LIBRARY, located near the top of the page (at right in the blue box).

Asteroid Day, celebrated around the world, commemorates the Tunguska event that occurred on June 30, 1908. Scientists believe the Tunguska event, an explosion that occurred above a remote area of Siberia, Russia, was caused by an asteroid entering Earth's atmosphere. Forty miles away, people reported, "the sky was split in two, and high above the forest, the whole northern part of the sky appeared covered with fire" and "at that moment there was a bang in the sky and a mighty crash…The crash was followed by a noise like stones falling from the sky, or of guns firing."

In today's task, How do asteroids cross Earth's path?, students experience the Chelyabinsk meteor phenomenon and engage in modeling and use the thinking tools of cause-and-effect to try to explain how an asteroid from the asteroid belt becomes a meteor on Earth. This phenomenon could be used to anchor a physics, astronomy, or Earth Science sequence of lessons.

How do asteroids cross Earth's path? is a stand-alone task. However, it can be taught as part of an instructional sequence in which students coherently build the science idea that Newton's second law accurately predicts changes in the motion of macroscopic objects. In this first of three playlist lessons, students raise the question, "How do asteroids leave the asteroid belt?", which motivates the need to engage in the next two lessons.

Tell your students, "I saw an intriguing phenomenon I want to share with you." Ask students to create a space in their science notebooks (or use a sheet of paper) to record their "noticings" and any questions that arise as they observe the phenomenon.

Share the Chelyabinsk video of an asteroid entering Earth's atmosphere above Chelyabinsk, Russia, on February 15, 2013. You might ask students to just watch the first time, then make and record observations as you play the video a second time. Tell students you have a second video of the same phenomenon you want to share.

Notes about the Russian Meteor Caught on Camera video—(1)The newscasters use the word meteorite incorrectly; students will be introduced to the naming convention in the third video, so it doesn't need to be addressed here. (2) After students view the video, emphasize that while the Chelyabinsk meteor was not caused by the known asteroid passing close by Earth that day, it was an asteroid (or part of an asteroid) that entered Earth's atmosphere. (Two near-Earth asteroids in one day?! Yes!)

Next, share the Russian Meteor Caught on Camera video. Again, ask students to make and record observations and any questions that arise.

Ask students to share their observations in small groups. Make sure students are aware they can add to their own observations. Remind them to record any questions that arise while talking with their partner. As you walk around the room, you may need to remind students who are trying to explain the phenomenon, "Remember right now we're focusing on the what, not the why," or "It sounds like you have some initial ideas about how or why this happened. This is a really interesting and strange phenomenon to try to explain. What you shared is helping me think of new questions."

Methods to support students in sharing observations in face-to-face and distance-learning settings. If you are completing this Daily Do with students in person, you might use the talking stick protocol described in the Why are plane designs so different? Daily Do. If you are completing this Daily Do in a distance-learning scenario, consider using this Google Slides Asteroids Anchor Phenomenon template as a collaborative tool for students to share their observations and questions. This Asteroids video clip recorded at the NSTA Engage: Fall20 virtual conference shows how students might interact collaboratively using this template. You can also access this video from the NSTA Teacher Tip: Google Slides web page. 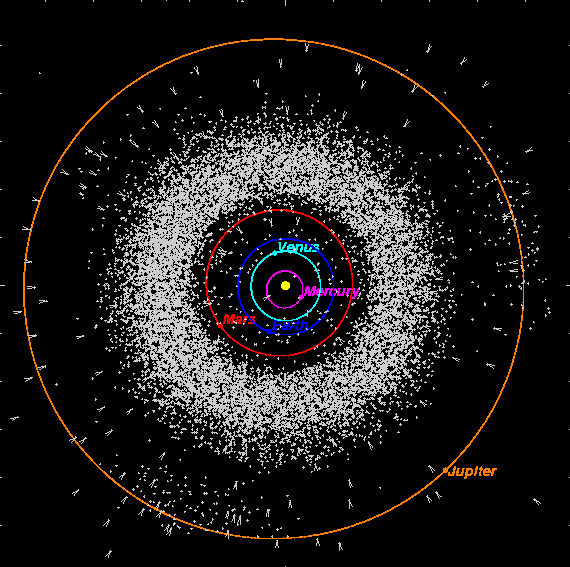 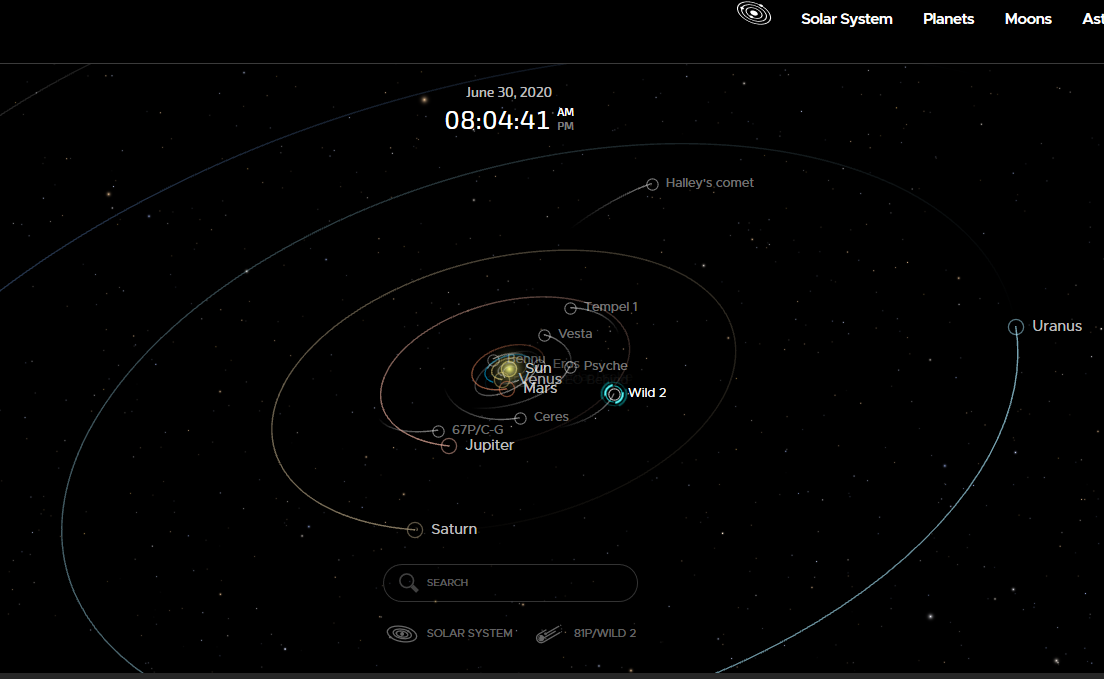 Say to students, "This Chelyabinsk phenomenon had me wondering how rare or common it might be for asteroids or parts of asteroids to enter Earth's atmosphere. Let me share this data set I found." Display the NASA map showing the 20-year global distribution of asteroid impacts on Earth. Give students an opportunity to make and record observations. You might ask if students notice any patterns in the data. Have students turn to a partner and briefly share observations, then ask for and record three sharings from the class.

Show students the location of the asteroid belt. The image above left shows the location with respect to the orbit of the inner planets and Jupiter. The image above right is a snapshot of the location of the planets and larger asteroids in their orbit around the Sun. You might show students the current locations of these bodies on the NASA Science: Solar System Exploration web page. Ask, "How can we explain how asteroids from the asteroid belt become fireballs/shooting starts/meteors on Earth?"

Ask students to create an initial model to explain how an asteroid from the asteroid belt becomes a fireball/shooting star/meteor on Earth. Give students an opportunity to first work in the "Alone Zone" (independent thinking time). If students are really struggling to begin their models, ask them to consider what absolutely must be included in the model to explain the phenomenon (components of the model). These components might include asteroid belt, asteroids, Earth, and the atmosphere. Next ask, "How do these two components (point to two components) interact? How might you represent that interaction?"

Next, place students into small groups. Ask students to compare their models and record similarities and differences between their model and their group members' models. Then give each group a piece of poster paper and ask them to create a group consensus model. As you walk around the room, you might ask groups the following questions:

Ask students to post their group consensus models around the room. You might use a "three stray–one stays" gallery walk strategy. Three (or two depending on group size) group members move around the room to notice similarities and differences between their group model and other group models, while one student remains behind to share their model with visiting groups.

Allow students time to return to their group and add to or change their models. For example, groups may realize they were missing a component(s) that they now feel is necessary to explain the phenomenon, or they may like the way another group represented an interaction and want to use that representation on their own model.

Consider creating a class consensus model. Ask groups to share the similarities they observed among the group models and draw those components and interactions on poster paper, whiteboard, etc. Next, ask groups to share the differences they noticed among the models. You might ask if it is okay to use question marks (?) to show the parts of the model the groups disagree with or of which the class is unsure.

Develop a Driving Question Board

Say to students, "What questions do you have about this phenomenon?" Give students time to think about and record questions they have about the phenomenon. Then ask students to choose their top question (or two questions) and write the question and their initials on a sticky note. Bring the students together for a Scientist Circle.

Ask a student to stand at the poster or board, read their question to the class, and then post it. This student calls on the next student to share before sitting down. The second student reads their question to the class, and then posts it next to the first question if it is related or by itself on the board if it is not. Continue in this manner until all students have posted one question. You might then let students with second questions go to the board and post them with related questions. With your students' help, you might identify the different categories of questions that emerged. These categories might include

Which questions you choose to pursue with your students will depend on the science ideas you are using this anchoring phenomenon to target. Before you navigate students to your next lesson, consider sharing the Most Mind-Blowing Video of 2013: Chelyabinsk Meteor video with your students, which tells how asteroids are sent hurtling toward Earth (but not in depth).

You might start navigating students to the next lesson by saying, "Many of us are wondering how asteroids leave the asteroid belt. Does it make sense to investigate this question first?"

Next, ask students, "What information did the video provide that might help us answer the question?" Students will likely say "asteroids get knocked out of the belt when they collide with one another" and/or "Jupiter's gravity causes asteroids to collide." (If students do not offer these answers, play the video from 1:54 to 2:04, then ask the question again). Suggest to students that the class revise the question, "How do asteroids leave the asteroid belt?" to include Jupiter: "How does Jupiter cause asteroids to leave the asteroid belt?"

Share that while we can't study the effect Jupiter has on asteroids in our classroom, we can investigate other phenomena in which an object's change in motion is similar to the change in motion of an asteroid that sets it on a path for Earth.