Why doesn't the snow melt? 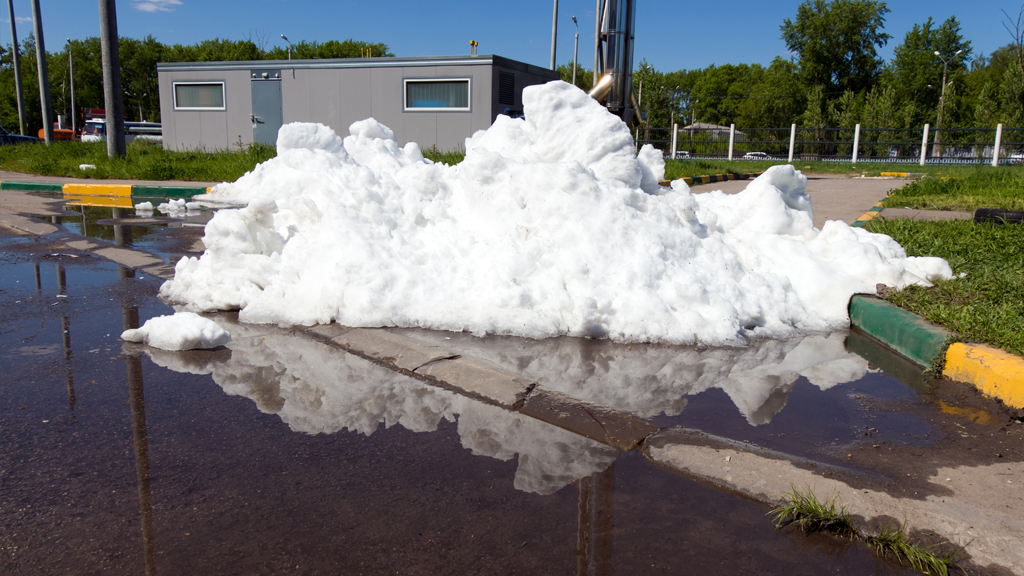 Boston, MA, received a record-setting 108.6 inches of snow during the winter of 2014-15. The last snowflake fell in mid-March; four months later, the last pile of snow finally melted. The tweet on the right shows snow being piled high on February 16, 2020, and the watery remains of that pile on July 14, 2020.

In today's Daily Do, Why doesn't the snow melt?, students experience the phenomenon of a snow pile that doesn't melt through the lens of energy and matter (crosscutting concept) and engage in science and engineering practices to try to explain why water remains a solid even when temperatures soar well-above freezing.

Student questions about this phenomenon will likely create in them a need to engage in the Why does ice melt without getting hotter? Daily Do. 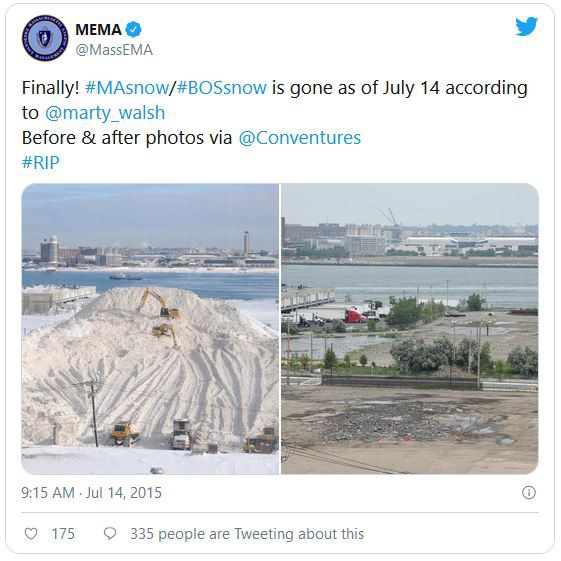 Why doesn't the snow melt? is a stand-alone task. However it can be taught as part of an instructional sequence in which students coherently build science ideas about water's ability to absorb, store and release large amounts of energy.

Tell students you have an intriguing phenomenon to share! First, Inform them that during the 2014–15 winter season, Boston, MA, had a record-breaking total snowfall of 108.6 inches. The last day snow fell that year was March 15, 2015. Then show students the picture of a snow pile in Boston, MA, photographed on May 28, 2015.

Ask students to create an "I see - I think - I wonder" table in their science notebook. Give them time to independently make and record observations (I see) and inferences (I think) as well as note questions that pop up while they are studying the photograph (I wonder). Students will likely be excited to share their thinking, but ask them to hold their ideas until after they observe the snow pile over time.

Next, share the Boston Snow Farm melt, March 27 - July 6, 2015 video with students. Ask them to again independently make and record observations and inferences; encourage them to add to or revise initial inferences based on new data (observations) as well as record new ideas. Remind students to record any new questions that arise while observing the snow pile through the video.

Ask students to review their inferences. Based on the class data (observations), would they revise or remove any of the inferences they made about the snow pile over time? Give students independent thinking time and then ask them to share with a partner an inference they revised or removed and why they made the change. Listen for students to share inferences/ideas about the (air) temperature being "cold" or "colder than normal" between March, 2015 and July, 2015.

Say to students, "Many of us are wondering if it was cold in Boston, MA, between March and July, 2015. Does it make sense to look at temperature data for these months before we go any further trying to explain our observations of the snow pile over time?"

Share historical air temperature data for Boston, MA, between April 2015 and June 2015 with students or task them to find air temperature data for this period on their own. (The linked weather data includes air temperature, precipitation, and wind speed; you might want students to consider all three data sets since they all contribute to the rate at which the snow pile melts.) Ask students to independently make and record observations of the data presented in the temperature, precipitation, and wind speed graphs. Then, ask students to work with their group to identify patterns in each data set and between data sets.

Bring the class back together and ask each group to share one pattern they identified. (Complete as many rounds of sharing as needed to capture all of the patterns identified.) Create a class record of the patterns observed. Students will likely identify the following patterns:

Consider showing the Boston Snow Farm melt, March 27 - July 6, 2015 video again. Do students notice any patterns between the weather data and changes in the snow pile over the same time period?

Ask students to revisit their inferences a second time. Based on the patterns in data the class identified, would they revise or remove any of the inferences they made about the snow pile over time? Give students independent thinking time and then ask them to share with a partner an inference they revised or removed and why they made the change.

Place students in small groups of no more than four students (these can be the same or different groups). Ask them to create a group model to explain why it took four months for the Boston, MA, snow pile to disappear. Encourage students to use the class observations of the snow pile over time and patterns in the weather data, as well as their individual inferences, to support their ideas. As you move around the room, you might ask the groups questions to move their thinking deeper without leading them. Examples of questions include:

Choose a group to share their model with the class. Ask students to look at their own group model and the one that was just presented to find similarities and differences between them. Ask the groups to share similarities and begin to develop a class consensus model to explain why it took four months for the snow pile in Boston, MA, to disappear. Ask students to share differences they noticed. Do the difference identify places where we disagree or are groups representing the same ideas but in different ways? How should we represent places where we disagree on the class consensus model?

Invite the next group to share. Again ask students to compare their own group model with the one presented and identify similarities and difference. Use the students noticing to add to and/or revise the class consensus model. Continue in this way until all of the groups you selected to present their models to the class have shared.

Say to students, "Between our inferences from observations and related phenomena, there are a lot of questions we could investigate that would help us figure out parts of our model to explain why the snow pile in Boston, MA, took four months to disappear." Ask students to choose one question the class could investigate to figure out more about what's happening in the snow pile and the related phenomena the class has brainstormed so far.

Navigating to the Next Lesson

You might say to students, "Many of us are wondering how any water can remain a solid (snow) when the temperature is above freezing. Should we investigate this question first?" Navigate students to the Why does ice melt without getting hotter? Daily Do.

Depending on the grade you teach, you might instead choose to pursue questions that create opportunities for your students to make sense of science ideas about the water cycle and/or how light interacts with objects.

NSTA has created a Why doesn't the snow melt? collection of resources to support teachers and families using this task. If you're an NSTA member, you can add this collection to your library by clicking Add to My Library (near top of page).